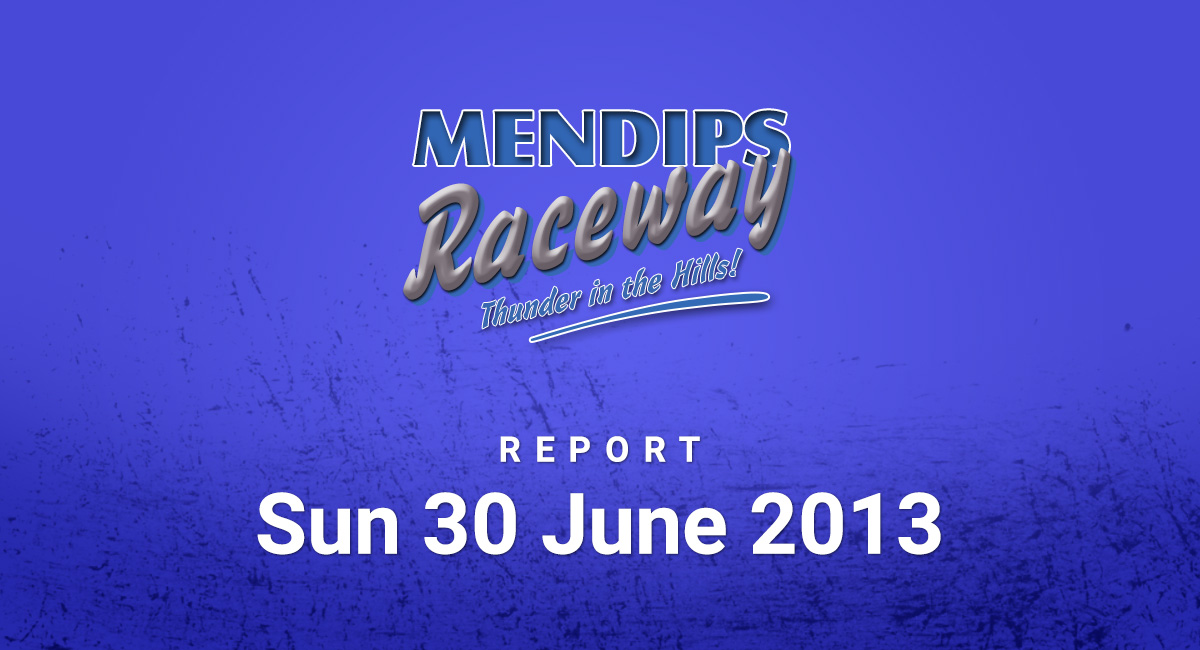 After the racing finished on Saturday, the sometimes infamous Mendips hill mist descended and it actually lasted until well into Sunday morning.  But thankfully by race time it had cleared to sunshine once again and those present were treated to a very special meeting from the unlimited National Bangers for the Graham Salter Tribute with support from the BriSCA F2 Stock Cars and the Junior Rods.

It was like turning the clock back in the Bangers, which was exactly how the meeting was intended to be with the meeting organised and planned by Jon Ayles and Rob Mills in Graham’s memory with an invitation only entry list and come the day there were 72 cars in attendance, which is pretty amazing for unlimited’s in 2013.

There were some very impressive cars and paint jobs on display too with the pick of the cars being an Austin Sheerline for 363 Sam Trim, a DS420 Hearse for 300 Ayles, DS420 Limo for 315 Jason Ayles and a very rare Peugeot for 801 Mike English as well as a few Rover P4’s, P5’s and Austin Westminster’s.   There were also some drivers who had not raced for a long time, some who very rarely race now and we also welcomed a legend of Banger racing in 201 John ‘Daddy’ Dodge whose career spans right back to the late 1960’s when ‘Banger racing’ per se was still a new thing.   Surely this meeting couldn’t fail to be anything other than good?!

Indeed that was the case.  With the rules set to ‘Old Skool’ the drivers agreed that everyone would get plenty of laps of their cars before any crashing commenced.  That is how it used to be, but sometimes lost on some now.

The heat split was done accordingly too with the first being primarily for the Granada’s and Jags, heat two being for the older and bigger cars and the third heat for the others, which included some of the younger drivers, many of whom were sons of drivers from Graham’s racing days.

The first heat went to 293 Adrian Broadway on his first appearance at Mendips for a number of years.  The race for the big and/or old, rare cars was won by 290 Jay Tomkins in a Mk10 Jag which he threw round in style, but 201 Dodge in a Wolseley 1800 did take some catching.  (The real) 190 Dominic Gumbleton took the win in heat three.

There were 37 cars in the consolation, and with it being big cars a track blockage was probably inevitable.  It came after there had been a red flag, which came about after English managed to roll the Peugeot on the home straight.  A track blockage after the re-start for that and eventually it was 311 Danny Allen who came through for the win.

All of which set the scene for the 32 car Final.  796 Dave Steeds took up the early running and he and 362 Johnny James, in a very rapid Jag pulled well clear.  James took the lead just prior to halfway when there was a red flag with 83 Andy Beavan in trouble after a knock from 315 Ayles in the Limo.   James looked like he could have pressure for the re-start but it was not the case as he once again pulled clear and took a very convincing win.  Steeds held on for second and 332 Chris Reed was third.

38 cars for the Allcomers and once again it was a spectacular race which went the way of another ‘old timer’ in 119 Steve Howe and that all led to the destruction derby, which impressively had 30+ cars in it, that in itself a very rare thing for unlimited meetings in 2013.  All the action happened on the top bend, and much of it under a smoke screen and when that settled, 710 Ben Wilkins emerged as the winner to round off what will without doubt be looked back on as one of the highlights of the 2013 season at Mendips Raceway.

With the BriSCA F2 Stock Cars in the midst of World Championship qualifying rounds and big weekender meetings around the corner, we did not expect a large entry and were grateful for the 29 cars that did attend.

After 519 John Scorse recorded his first Stock Car win in the Rookies Reward race the rest of the day was all about track champion 886 Chris Bradbury as he took a hat-trick of wins and then went on to take the Grand National from the lap handicap too.  Mightily impressive stuff and he was not only the first driver to achieve this anywhere in 2013, but it was the first time in his career too.

In the Final it was the other heat winner 921 Jack Aldridge who was second and 823 Sam Wagner, all the way from Middlesborough third.  This was Bradbury’s fourth Final in a row at Mendips.

The Junior Rods were raring to go after several weeks away, and the record of at least one newcomer at each meeting this year continued.   The two heats went the way of 273 Zoe Cambridge and 87 Callum Richards whilst the consolation saw 300 Charlie Ayles first across the line but he was docked two places for contact for his involvement in a crash which curtailed the race involving 715 Ian Moorhouse.

The Final was led by 39 Sophie Harris until 24 Sam Crane took over but Richards already looked to have the race covered when there was a yellow flag after 66 Becky Pearce and 203 Charlie Norton crashed on the back straight.  Crane headed off the re-start but was soon passed by Richards who went on to win by a fair margin.  362 Aaron Loader took second and 25 Brad Seymour came through for third.