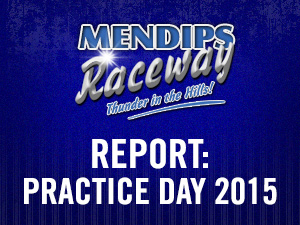 Over seventy drivers took advantage of the fine spring weather to shakedown their cars in preparation for the new season at Practice Day on Saturday March 7th.

Drivers were universal in their approval of the revised inner barrier layout, which gives better visibility on the bends, and a softer landing!

There were twelve F2 stock cars, some on their way to Birmingham Wheels in the evening, including the superb new cars of Chris Mikulla (522) whose RCE chassis featured the new Zetec 2 litre engine, and James Rygor (783) 2013 World Champion with his new TLF chassis. The track proved slow, but times improved as the day went on. Practice times can be seen on www.mylaps.com

There 15 Junior rods in attendance, of which six were brand new to the sport, and all of them took their written and track assessments, passing with flying colours! All went on to get some laps under their belt in readiness for the opening meeting on March 22nd.

Hot rods were also present, including the fantastic new Peugot 206cc of James Griggs, and his 2014 car, also beautifully repainted and signwritten for returnee Jeff Johnson (536) who last raced in 2006 in a Banger Van! Jeff found quite a difference with almost 200bhp on tap, but looked well in control.

Special Rods  saw the first appearance of Taunton driver Steve Brown (108) , who plans to race in Special Rods and Old Skool Bangers. On that subject, Rich May (501) had a whole team of Old Skool bangers there, proving there are still Granadas around for racing!

Nice to see James Perry (761) back at the Raceway after along absence, also with a Granada, and plenty of KAs ready for the opening Micro meeting.

Good day all round, and an ideal start to the 2015 season!