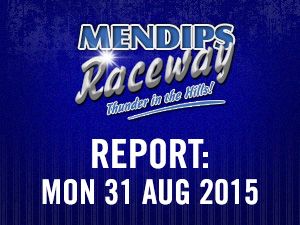 There was a large crowd for the Caravandalism 15, Rookie Bangers, Hot Rods West of England Championship and Robins.

The track was very wet for practice after all the heavy rain in the morning and a few drivers had arguments with the fence including 117 Dave Tossell who was unable to repair his Hot Rod for the rest of the meeting. With light rain for the first few races the track remained greasy for most of the meeting.

The 2nd  Hot Rod heat was a reverse grid of the 1st heat with the highest point scorers starting at the front of the grid for The Final. 10 cars made it out for the 1st Heat 278 Graham Cole was caught napping as the green flag dropped and 788 Mark Shelper shot straight round him for the lead, then 35 Neil Muddle and Cole had a big coming together leaving them both in the fence and Cole was unable to take part in the rest of the meeting. 258 James Griggs retired before the re-start which was led by Shelper from 205 Mike Norton then 282 Steve Hunt. Shelper’s car went sick and slowed and stopped on the exit of the turnstyle bend near the fence, giving Norton the lead, Norton took the win from Hunt then 904 Wilson Hamilton. 9 cars made it out for the 2nd Heat 125 Mike Hibberd lead from pole closely followed by Hamilton then Hunt, Norton retired. Shelper passed Muddle, 17 Paul Tossell and 578 Rick Lee for 5th, Hunt went to go round the outside of a backmarker and Griggs nipped up the inside of Hunt, then Hunt got on the outside of Griggs and as they were side-by-side Griggs’s car went sick forcing Griggs to retire. Hibberd went onto win by a length of a straight from Hamilton, then Hunt, then Shelper. 9 cars made it out for the Final Hibberd took the early lead from pole with Hunt closely behind and they quickly built up a gap from Hamilton, and Norton and Shelper went round the outside of Muddle for 3rd and 4th Hamilton then set about reeling in Hunt, and Hamilton managed to catch Hunt, and put Hunt under a lot of pressure, and kept trying both lines to try and force Hunt into a mistake, but Hunt was making his car very wide, and as Hunt was busy trying to defend 2nd Hibberd managed to pull out a gap from Hunt. Hibberd went on to win from Hunt, then Hamilton.

In the Special Rods there was some very competitive racing with a lot of swapping places. With only 20 cars racing they all raced in all the races. 19 cars came out for the 1st heat 701 Ben Brice outdragged pole sitter 46 Angie Harris for the lead, then 26 Andy Bennet tried going round the outside of Harris and they went side-by-side for about a lap then they had a coming together, and Harris spun out of the race. Then as too many cars were going for one piece of tarmac 51 Rob Price got squeezed into the fence coming out of the pit bend and went the length of the straight and 720 Dan Latimer also got squeezed into the fence at the end of the straight, and both cars ended in the turnstyle bend fence together bringing about a stoppage. B.Brice led the re-start from Bennet then 122 Joe Rowe, then 175 Kevin Oliver. J.Rowe then swept round the outside of Bennet for 2nd, then J.Rowe caught B.Brice and went round the outside of B.Brice and they spent about a lap side-by-side before J.Rowe could make it stick! J.Rowe went onto win from B.Brice then 426 Russ Colenutt from last on the grid and he passed most of the cars on the outside! For the 2nd heat there was a late arrival, and D.Latimer and Price couldn’t repair their cars in time leaving 18 cars for the race B.Brice out dragged pole sitter Bennet and quickly built up a big lead from Bennet, and Harris.  J.Rowe quickly got up to 5th from 10th on the grid and went round the outside of 136 Jason Horseman, and Harris closely followed by 41 Dene Howard. Further back Colenutt and 304 Tim Weare were having a bit of a battle as they were trying to get through the red tops and holding each other up, 993 Darren Foss then had an off and had an argument with a marker tyre! B.Brice went on to win by 1/2 a lap from Bennet then J.Rowe . 19 cars made it out for the Final including D Latimer, and Price who managed to repair their cars. 784 Henry Murray out dragged pole sitter Bennet for the early lead and B.Brice went round the outside of Harris, and Bennet for 2nd then B.Brice found a gap on the inside of Murray to relieve him of the lead, and D.Latimer had a half spin. Further back J.Rowe was carving his way through the field mostly on the outside to get up to 3rd, and Colenutt and Weare was again a battle amongst themselves as they were trying to get through the red tops, then J.Rowe found a way past Bennett for 2nd. On the last lap Colenutt went round the outside of Harris to relieve her of 4th B.Brice took the win from J.Rowe, then Bennett then, Colenutt . 17 cars came out for the Grand National and B.Brice started in pole position but lap down. Bennet led from pole from Oliver then Harris. 5 Alan Lettley, D.Latimer, had a coming together sending Lettley into a marker tyre, Harris then found a way past Oliver for 2nd, then Horseman tried the outside of Oliver but couldn’t make it stick and J.Rowe sneaked up the inside of both of them for 2nd. Bennet went onto win from J.Rowe, then Harris, Horseman, then Colenutt from last on the grid.

As this was the final meeting for Robins, Tim Weare(304) retained the Points Championship, and Gordon Mintram(101) won the Mark Loader Roofing Entertainers series.

There was a good mix of cars in the Bangers including 258 Dean Hughes in a Ford Ka, 777 Ricky Daunton in a Ford Puma, 99 Ryan Hall in a Mk3 Escort, 112 Widget in a Peugeot 205 and a few Honda Civic’s amongst other cars. 22 cars came out for the 1st Banger Heat, amongst the knocks and spins, Hughes got spun and was collected head on, and there was a 5 car pile and as 215 Steven Samways got spun he received a massive hit from 816 Martin Gill !! 107 Dan Chiplen went on to take the win from 109 Chris Neville, then 938 Ashley Rice. 21 cars came out for the 2nd heat which had a lot of action with a lot of knocks and spins, Widget got spun out at  the start, and 4 cars crashed on the turnstyle bend leaving 2 cars stranded, and 154 spud ended up being in the thick of the action. 13 Lee Radmore took a flag to flag victory, from 83 Ben Styles, then 54 Tom Davey. 17 cars came out for the Consolation 131 Owain Cox and 256 Jamie Turner went in the fence hard bringing about a complete re-start. 505 Sam May took the win from 55 Alan Machin. 24 cars qualified for an action packed Final with a lot of knocks and spins, and crashes all around the raceway!! 938 Ash Rice survived to take the win from 83 Kev Styles , then 505 Sam May.

As this was the final Banger(rookie) meeting, 38 Ben Styles was awarded the Points Championship from Lee Dalton(129)

15 Caravans came out for Caravandalism 15. 270 Slug won the Top Tin Award for a very smart Car and Caravan. In an action packed race which finished with a head on between 27 Dean Quinn and 189 Jamie Knox, and D.Quinn was the only car left running so was declared the winner.