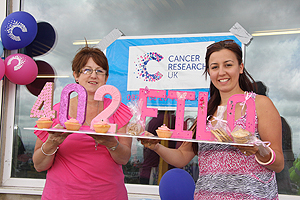 The Report follows below the photos...

The traditional end of July date was more to its indeed more traditional format this year after the Olympics in 2012, with the meeting being geared around cancer research charities in memory of friends of Mendips Raceway Phil ‘Filo’ Cleverley and Lesley Maidment.

For the Bangers it was a return to the popular team racing, which was for the Rookie Bangers for the first time, the BriSCA F2 Stock Cars were present a week ahead of their World Championship Semi Finals and the Special Rods raced in the first round of their mini Summer Series.   The day kicked off though with the annual bike ride, with some wonderful examples of fancy dress both on the bikes and the riders.  The race was actually won by Barry Richards, complete with pink curly wig.  Once again a nice amount was raised, totalling £261.

The entry of F2 Stock Cars was a tad disappointing all things considered, but equally it has to be respected that the height of summer is a busy time for both race meetings and annual holidays.  However, the 28 car total did include recently crowned European Champion 401 Barry Goldin on a reconnaissance trip ahead of the Semi Finals, likewise for 101 Kelvyn Whalley, 299 Steve Smith and regular visitor 768 Tom Adcroft.

The first heat saw the result decided right in the last two laps when long-time leader 526 Marc Rowe found himself dispatched into the plating and 886 Chris Bradbury burst through into the lead and the victory.  Heat two saw two early yellow flags and it was Goldin who came through for the win and then in heat three a more straight forward journey through the pack for Bradbury to take the win, and thus look good to continue his unbroken run in Finals at Mendips Raceway in 2012.  He was the defending title holder of the Pink Ribbon Trophy too.  However, the lower graded drivers got away well with 979 Paul Moss the early leader, tracked by 935 Nathan Maidment.  Bradbury got a good start and then got embroiled in a great scrap between himself, Whalley, Goldin and 522 Chris Mikulla.  Maidment moved past Moss to lead and from then on pulled clear and was never challenged on his way to a very poignant and emotional victory.  Goldin fought his way to second and Bradbury was third.

There was a shower of rain during the Grand National which made the track slippery, but Bradbury seemed to excel in such conditions, as he has before and went on to make it a hat-trick of wins, heading into this weekends all important race/meeting.  Harding Race Engines presented a tyre to the top lower graded drivers on the day which were 519 John Scorse for white, 430 Simon Edwards yellow and 189 Paul Butcher blue.  The track championship looks like it could even be wrapped by Bradbury, for a sixth year in a row, this weekend.

The move to Rookie spec for the Bangers, once again proved popular with 15 teams of four in attendance for “Filo’s Crashmania” and there were some very smartly presented teams too, with only one not having the full set painted up in colours but the judged top ones were the “All Blacks” with a quartet of nicely painted a sign written cars, and as expected they were to play a large part of what went took place on the track too.

Things got off to a spectacular start in heat one as 68 Steve Stockley, whose Riverside Café sponsored the meeting barrel rolled on the home straight and he came to rest on the inner Armco.   54 Tom Davey took the win for the “Odd Squad A” in a race which was curtailed when 47 Ross Edwards took a knock on the back straight.

The second heat went the way of the “All Blacks” when 129 Lee Dalton took the victory which put them into the lead at this point, ahead of the “Odd Squad A” and really set the tone for these two teams to be locked into battle.   After 556 Pete Hollis and 107 Dan Chiplen had disputed the lead in the third heat, 54 Davey impressively came through from the back of the pack to take the victory for his team, but then blotted his copybook by attacking 189 Jamie Knox, from “The All Blacks” after the red flags were showing which resulted in him being disqualified and moved 266 Micky Ford for “Team Fordspeed” into the victory.

The fourth and last heat saw both Davey and team mate 149 Lee  Norman pull well clear at the front and looked certain for a 1-2 finish.  However, Norman crashed unaided on the car park bend which lost “Odd Squad A” valuable points, even though Davey won.  It was not a good one for the guys in black, but they still had the lead going into the Final.   A shower of rain added to the drama for this, as 475 Ben Sealey for the “Tarmac Terrorists” opened out a good lead.  This was whittled down when 384 Scott Benjafield had a problem.

Sealey once again assumed the lead at the re-start but behind him the battle between the two top teams turned into a war when 129 Dalton took things way beyond what is acceptable, especially in Rookie Bangers appeared to attempt an attack on the infield on Davey and the race was halted, and declared before things could get out of hand any further.

Thus Sealey took the victory, but when the points were totted up “The All Blacks”, with third and fourth in the places had done enough to win on 50 points from the “Tarmac Terrorists” on 45 “Odd Squad A” on 44.  However, following 129’s transgression, the Steward decreed that the whole team should be disqualified and thus the overall victory went to the TT’s, to go with Sealey’s win.  149 Norman was presented with the “Spirit of Filo” award, but it was disappointing that the outcome of the meeting ended in the way that it did.

A couple of Special Rods failed scrutineering which led to a change in format for them to a two from three heat one, the same as in the BriSCA F2’s and this worked well.  122 Joe Rowe came through to win the first hear and then followed it up in another in heat two when he pipped long-time leader 35 Mark Johns right on the very final corner when the white top found himself in traffic.  The last heat saw a flag to flag win for 85 Andy Pincott, despite a scare at one stage when back marking traffic crashed in front of him.

The Final was led off by 521 Pip Carter ahead of Pincott and Johns and the trio of white graders got a good lead in on the busy track.  This was enhanced when 136 Jason Horseman and 210 Paul Barnes tangled up which held up several of the star graded drivers.  This allowed 175 Kev Scammel to be the one to chase down Carter and he hit the front in the final quarter of the race and went on to win.

However behind it was all decided on the last corner when Carter clashed with back marking traffic and spun, and those behind found their way past and three of them crossed the line almost three abreast but it was 993 Darren Foss who got there for second and 23 Ross Stuckey for third.