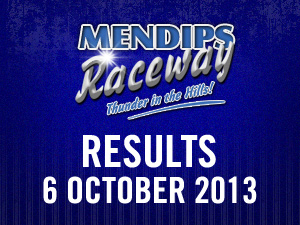 On a warm, dry and sunny day there were Special Rods, Junior Rods, and Rookie Bangers all racing for their West of England Championship with 12 races finished before 5pm.

A lot of close racing and overtaking happened in the Special Rods with 10 cars taking part in the first Heat. 370 Steve Baker out-dragged 26 Andy Bennett for the lead from pole from 51 Rob Price. Baker then built up a bit of a gap.  Further back, 18 Russ Colenutt closely followed by 23 Ross Stuckey were carving their way through the pack using the inside and outside lines, until they got to R. Price who Stuckey struggled to find a way past.

Colenutt then reeled in Baker and passed him around the outside to relieve him of the lead. Colenutt then built up a big lead. 41 Dene Howard managed to catch Stuckey but couldn't find a way past. Further back, Bennett was leading a 5-car battle. Colenutt went on to win from Baker then Stuckey.

The second heat line-up was 14 cars. 364 Darren Feltham led from pole from 386 Adam Ghey, 4 Brian Roper and 7 Will Harraway.  720 Dan Latimer quickly got up from 7th to 5th and went around the outside of Harraway, Roper, and Ghey for 2nd place, with 173 Alan Cambridge and 210 Paul Barnes closely behind, and Cambridge passed Latimer for second.

Cambridge then reeled in and passed Feltham for the lead. 175 Kev Scammell ended up crashing into the wall on the pit straight, and Latimer got black flagged. Cambridge crossed the line first, but was docked 2 places giving Barnes the win from Feltham then Cambridge then 122 Joe Rowe and 47 Richard Howard - who started at the back.

5 cars were out for the Consolation including Kev Scammell who had done well to repair his car in time. Roper led from pole, Scammell spent quite a few laps on the outside of 35 Mark Johns before he managed to get past. Latimer caught and passed Roper to relieve him of the lead.

Scammell found a way past 993 Darren Foss then Roper, then on the last lap Scammell tried to go around the outside of Latimer but couldn't make it stick. Latimer took the win from Scammell then Roper.

22 cars were entered for the West of England Championship with first places in the heats on the front row, and 2nd places on the second row and so on.... with the qualifiers from the consolation at the back. Barnes out dragged Colenutt from pole with Baker in 3rd, a few laps later, Colenutt made another attempt around the outside of Barnes and managed to make it stick! Colenutt then disappeared into the lead and Colenutt and Barnes were soon amongst the back markers.

11 cars made it out for the 1st Junior Rod Heat. 240 Rachel Bowering in a Ford Fiesta took the early lead and 16 Dan Milverton quickly got up to 3rd from 7th. Then 30 Joe Capel tried to go around the outside of Bowering, and Milverton tried to go round the outside of them both making it 3 abreast! Milverton managed to make it stick and took the lead, while Capel slotted into 2nd. 273 Zoe Cambridge made it up to 2nd from 9th on the grid. Milverton crossed the line 1st but was docked 2 places for jumping the start, giving Cambridge the win from Capel then Milverton. 700 Ben Brice was also docked 2 places for jumping the start.

Only 7 cars managed to join the 2nd heat. 715 Ian Moorhouse took the lead from pole. 87 Callum Richards had a half spin in front of 956 Harry Thompson letting him past, and 203 Charlie Norton found a way past Moorhouse to relieve him of the lead, then Thompson found a gap up the inside of Norton to take the lead. Richards tried several times to go around the outside of Norton, including when Norton was going round Moorhouse making it 3 abreast!

On the last lap Richards tried again to pass the outside of Norton and they crossed the line side by-side but Norton was just ahead. Thompson took the win from Norton then Richards.

There were 13 cars out for the West Of England Championship, and they also had the Heat winners on the front row.  Cambridge led from pole followed by Thompson and they pulled a bit of a gap from Capel. Richards quickly got from 6th to relieve Capel of 3rd place, then 66 Becky Pearce spun in front of 24 Sam Crane.  A few laps later, Crane and Norton had a coming together causing a stoppage for Crane. Cambridge led the re-start from Thompson, Richards, 362 Aaron loader then Milverton and they stayed in those positions for the rest of the race.

The All-comers final had 16 cars at the start. Capel took the early lead from pole, and Milverton quickly got up to 2nd from the red grade followed by Richards then Loader. Milverton then found a way past Capel and disappeared into the lead. Richards then found a way past Loader then Capel for second. On the last lap Loader found a way past Capel whilst they were going through the backmarkers. Milverton went on to take the win from Richards, then Loader, then Capel. 362 Loader won the track points and 376 Daniel Kent got an award for the most improved driver making it to the red grade in his first year!

A good mix of cars took part in the Rookie Bangers, including a lot of Ford Mondeos, some Honda’s Vauxhall Cavalier’s, MK3 Escort’s, and Honda Civics. In the 1st Heat there were about 22 cars, 181 Andy Churchill took the early lead until just before the half way mark Churchill was heading a four car train and when he spun 23 Craig Earl out, Earl went backwards towards the fence forcing the four car train on the outside into the fence. Only 8 cars managed to survive the skirmishes and spins. 475 Ben Sealey took the win from 406 Chris Bridger then 235 Toby Brooks.

23 cars were out for the 2nd Heat, 504 Andrew Worthington took the early lead and within the first couple of laps 888 Simon Brook managed to put his car on its roof (with a little help!!) causing a compete re-start.  On the re-start there was a three car crash on the pit bend triggering cars going in all directions causing a mobile chicane!! 113 Chris Jeanes survived the skirmishes to take the win from 133 Jody Jeanes then 246 Ryan Sparks.

20 or so cars made it for the Consolation Race. 34 Scott Gray took the early lead then there was another 3 car crash on the exit of the pit bend triggering a huge pile up involving most of the field and a complete track blockage!! Only 8 cars joined the re-start. 778 Paul May lead the re-start from 444 Keiron Bellringer then Gray. 372 Jay Matthews and Worthington had very twisted motors and both were spun out by Gray and Mathews managed to limp his very twisted motor home. 247 Richard Sparks took the win.

There were 22 cars out for the West of England Championship, just like the other formula’s 1st places in the heats started on the front row. Sealey took the early lead from Bridger then Ryan Sparks.  The race started quietly then there were a lot of skirmishes at the end of the home straight and around the pit bend where a mobile chicane was forming which caught out Sealey and Bridger, giving Ryan Sparkes the lead!! Ryan Sparkes led for a while just missing crashes happening in front of him!

There was a stoppage and Ryan Sparkes led the re-start from Chris Jeanes then Brooks with a few laps left Ryan Sparkes and Chris Jeanes crashed out of the race on the turnstyle bend handing the lead to Brooks. Brooks went on to take the win from 109 Chris Neville then Matthews.