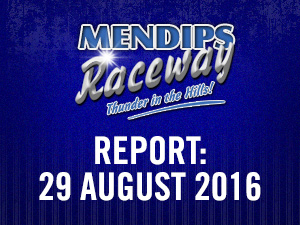 A huge crowd arrived in bright sunshine for the August Bank Holiday Monday meeting, in contrast to the dull and wet weather of the previous day.

Four formulae were on show for the eager crowd, and the Grand Parade was well recieved as drivers were presented with top tin awards for their efforts in preparing cars and caravans.

Although there were not many caravans on parade, there were plenty back in the pits!

Top efforts from Widget (113), and defending champion Deano(27). The racing got under way with the Special Rods, which raced three heats and  a final, drivers taking part in two from three.

This was also the Final of the Summer Series, where drivers were rewarded in grades at the end of the meeting.

Heat one was a good win for Superstar Dan Latimer(720) putting behind him the problems of the last meeting, and he was followed home by Will Haraway(7).

Heat Two went the way of an elated Stuart Garland(556) his first win, and second was Mark Loader (444) making his debut in the formula.

In the Final, Jordan Edwards (224) had a really good run until half distance, when Sam Bartlett took  over, until the end but, sadly there was a big crash on lap 16 that took out several drivers, which was good news for Bartlett.

Dale Edwards(244) finished runner up with Dene Howard in third.

The points were calculated, and the awards were made to Ben Brice(701) Superstar, Dene Howard (41) Red, Jason Horseman(136) blue, and Sam Bartlett (91) white.

The 2016 West of England Championship sponsored by Shocktec for Hot Rods raised a small but competitive field, including Colin White(718), and James Griggs(258) who recently won the Outlaw Hot Rods World Championship, but not the defending Champion Mike Hibberd(125) who no longer races Hot Rods.

Two qualifying heats were run to decide the grid for the Championship, and these were won by Griggs and White, unsurprisingly.

Come the Final, White took a commanding lead early in the race and looked to have the title sewn up, but his car suddenly slowed with a rear axle failure, and Griggs cruised to the win, followed home by on form driver Dave Tossell(117) and Mark Shelper(88) in a similar result to the World title the week before.

The Hot Rods are back for their final meeting on September 18th.

The Robins were also a little lower in numbers, and as always, not short of action! A straight race, Ramp race, figure of Eight race and Destruction derby were planned, and it was the old sparring partners Cliff Worthington (437) and Tim Weare (304) who diced for the lead as Jack Chapman (42) rolled his car as usual! It was Worthington who came out on top as Weare's car did not have its usual speed.

Dan Tytheridge(3) received the Entertainer award for his antics.

The Ramp Race was  a little different as drivers had the option of avoiding the ramp, but losing places if they did so. It was Russ Gillingham (26) who was declared the winner, from Martin Dalton (58) with Jerry Weeks taking the Entertainer Award.

Plenty of near misses and Oohs and Aahs during the Figure of Eight race, which started with a massive crash with Stacey Howe(119) and Chapman well involved, which ended her day on the spot!

After Dan Tytheridge made a rare mistake while well in the lead, it was Gillingham again who took the victory from Weeks.

Almost all the drivers took part in the Destruction Derby, which was fairly short and sharp, and finished with that man Gillingham taking a huge shot at Tytheridge, removing the rear axle from the #3 car, and giving him his hat trick of wins! When the points were totted up,

Tim Weare was declared Points Champions 2016, by a single point from Russ Gillingham!

40 Bangers signed on for the meeting, with 16 expected to also race in Caravandalism 16. There was the usual good showing from the Scraprats team, plus Scott's Rent a Rookie team with National Banger driver Macauley Mills (440) looking for some track time as well in his first time in a banger.

Heat one went the way of Jamie Knox(189) in a flag to flag victory, alhough Ben Styles(38) the defending Points Champion was on his case by the chequered flag. Father Kev Styles (83) won heat two, from Dan Rice (138), who looked a possible Points Championship winner on this form.

Mills placed third from the back of the grid. Dean Quinn (27) won the consolation from visiting driver Layton Davis (458) on his debut at the Raceway in a punishing race with only 9 finishers.Knox continued his good form in the Final, placing third behind the Styles, with Ben winning from Kevin, on which was possibly his last regular meeting in the formula.

Despite only finishing 7th, Dan Rice (138) amassed enough points to win the Points Championship, and was duly awarded the shield.

The stage was set for the highlight of the afternoon as 16 cars and caravans lined up on the track, and after a problem on the rolling lap when Ollie Cope (624) lost his van, the race  was given two rolling laps to up the tension, and then they were off!

Cope started the race without his van and did his best to trash it before pulling off, and after a couple of laps there was a massive pile up just past the pit gate with every piling in and Aaron Loader (362) flying way, way up over the top of Noddy (284) and others, and a red flag was called just to make sure all was well.

With some of the debris  cleared, a very reduced field set off, and it was Darren Feltham (364) who emerged in the lead as the drivers continued to race and trash, and hop on and off each other's trailers to the amusement of the spectators.

Sadly though, Darren's car failed, and 16 years of competing in this race, he is still without a win, and then it was defending champion Deano (27) who took over, with veteran racer Gary Hunt (175) in second and that is how it finished. Superb efforts from all of the drivers and a great great race!