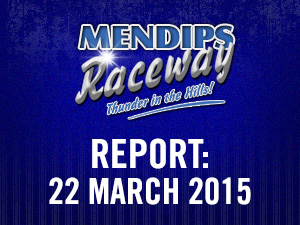 The first meeting of the 2015 season was greeted with wonderful clear blue skies and sunshine, and although there was a chill in the air, the good sized crowd on hand were treated to a very full programme from well over 100 competitors with the National Micro Bangers putting on the usual great show ably backed up by the annual visit of the Heritage FII Stock Cars and the Hot Rods and Junior Rods. And we ended up with a trio of hat-tricks and very nearly another!

The Banger entry was just over the highly impressive count of 70 cars with entries from all over the south of England, from the far south west and a great showing from over the Severn Bridge in Wales. Car wise, many Ford KA’s and Nissan Micras had their last ride. With World Championship qualifying points up for grabs the drivers had extra to go for too. With so many cars, three heats were the order of the day and the first went to 517 Scott Weldon whilst the second went to 114 Liam Lake and the third to 67 Ricky Beasley, all of which saw a mixture of racing and action.

The consolation saw a succession of big hits at the end of the back straight and a red flag after 330 Ben Key inverted his car. 739 Jason Moore went on to win after the re-start. The Final soon saw Beasley in the lead and he very quickly opened out a huge lead on the rest. A red flag for debris on the track did give the chance for those chasing to close up, but he had all that covered and went on to win with the race being declared on the last lap with a car on fire in one of the many pile ups dotted around the track. 739 Moore was second and 114 Lake third.

38 cars started the very lively Allcomers race but it was once again Beasley who came through to win and make it one of the afore mentioned hat-tricks. The following Destruction Derby was actually a short, sharp affair and 206 Matt Kelly outlasted them all to win.

Despite a disappointing entry of Hot Rods, the racing was close and at times controversial. Hopefully there will be an upturn in numbers for the Easter meeting. 258 James Griggs gave 718 Colin White a run for it in the first heat, but the former World Champion found a way around the outside to take the win.

In heat two, however, he couldn’t find a way past 788 Mark Shelper, having caught him in the closing stages and the latter just held on by half a cars length at the flag. White found himself in a battle of supremacy with 282 Steve Hunt in the Final and the pair clashed twice, the second time saw Shelper find himself inadvertently involved and he crashed which brought out the yellow flags. White and Hunt were both given a Steward’s warning for their part. White reeled in long time leader 205 Mike Norton over the remaining laps and went on to win. Griggs completed the top three.

A good entry of Junior Rods included several new drivers, new cars and combinations of both. The first heat looked like going the way of 644 Ashton Thompson, but 300 Charlie Ayles made huge strides through the traffic in the second half of the race and went around Ash on the last lap to come through and pick up from where he left off in 2014. 285 Jacob Anderson was the long time pace setter in heat two, but, once again it was Ayles who made a late charge from the back of the pack and came through to hit the front on the last lap and take his second win.

Heat three saw 376 Dan Kent take a convincing win. The question was, could anyone beat Ayles in the Final? 36 Josh Weare was the leader right until the halfway point when 66 Becky Pearce took over. Ayles was already looming though and he moved ahead of the 66 car shortly after. However, a yellow flag for 224 Jordan Edwards stranded on the racing line closed all the gaps up. Ayles had it all covered though and opened out a gap. What wasn’t anticipated though was a clash as he took the chequered flag with 34 Cameron McColm which saw the 300 car spun into the wall. The hat-tick was complete though. Pearce was second and Anderson third.

The Heritage drivers were also in their first meeting of the season and featured drivers from many parts of the country. Their races were dominated by one man, and one of the longest serving drivers in oval racing in this country at that with 264 Pete Welland taking a hat-trick of wins. He was moved further back up the grid for the Final and the win looked unlikely for the most part with 616 Darren Clarke well clear. However when 347 Ian Ferguson, 763 Andy Bateman and 869 Mike Walmsley tangled out on the back straight the yellow flags were called. This allowed Welland, who had made it up to fourth place by then to challenge Clarke in the three laps that remained and he made his move and went on to take the victory. Clarke made it his third second place of the day and 61 Keith Passey was third.