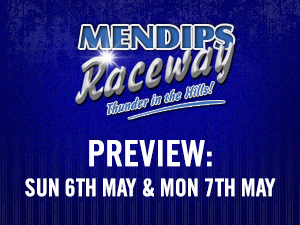 After a month away we are back racing next weekend, with an outstanding showing of formulas and car numbers providing top quality entertainment over TWO DAYS! Sunday sees the return of UNLIMITED NATIONAL BANGERS!
You wanted it, we give you it. A huge £2000 prize pot is up for grabs for the national bangers, who are bound to bring some Thunder back to the Hills.
We also see some of the very best non contact racing through our Special Rods, who last time out really set a light the meeting, as well as our future starts, with the Junior Rods demonstrating their ever developing skills.
Monday sees the return of F2 stockcars, with home favourites 522 Chris Mikulla and 935 Leading the booking list, as well as distance traveller 761 Richard Bowyer and the comeback kid 676 Neil Hooper. The two South West Superstars 127 Matt Stoneman and 542 Steven Gilbert will also be demonstrating, their deserved flashing lights.
We also have our bangers racing on the monday, providing top notch nudge and spin racing, countered by the fast hard racing provided by the Hot Rods, where we see last years top 4 batlling away once again. Finally, the reason for one of our favourite meetings of the year, the Robin's Caravan Carnage will be our last race of the day following after a top day of Robin entertainment, where we see an additional 13 drivers racing this meeting!
We will see you next weekend!
Cheers 'n' Gone
Jonny