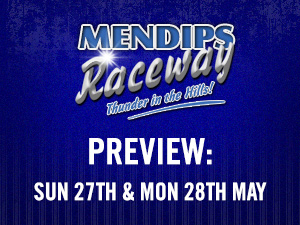 Another Bank Holiday Weekend gets underway at Mendips with another busy weekend of action. Sunday sees the Old Skool World Final with Juniors and F2’s playing support. Monday sees B2B Unlimited Bangers along with Special and Hot Rods along with Craziness galore with the Robins!

OLD SKOOL WORLD FINAL The 3rd running of the Old Skool Unlimted Banger World Final, where the nudge and spinners negotiate their way though the grid, using reasonable force! Reigning champion is Johnny James (362) who very much kept it in the family from his brother Buddy (262) who won the title in 2016. Dean Quinn (27) and Big Mac (440) will also be contenders along with the like of the Newton Abbot based drivers Danny Hunt (382) and Ryan Sparks (246) With the unlimited bangers this will be their first meeting under old skool rules- i.e nudge and spin, no follow ins… BRISCA F2 Another meeting for the UK’s biggest open wheeled formula and the form book certainly points to more lower grade success, following on the heels Matt Stoneman (127) stole top honours last time, which catapulted him to a healthy lead in the track points championship. Paul Moss (979) was a star of the show last time out, but has now returned to accustomed blue top. Stoneman’s fellow superstar, Steve Gilbert (542) continues to chase that elusive first final win at Mendips. Boyed from her best white top award, Becky Pearce (660) will be looking to build on this. Also making an impressive track debut was Tommy Farrell (667) We might see some more visitors as the World Final draws ever nearer….. JUNIOR RODS The Juniors certainly have been entertaining this year, and with the new grades it proved to be no hinderance. Charlie Johns (35) took a win, but George Jenkins (8) won from his new grade, his second of the season. Thomas Weeks (100) is the man to beat as he picked up his 4 and 5th race wins of the year and very much the youngster to beat. Hoping for a better day is Maddie Giambaresi (176) who stuck her Micra on its roof. She got out and wanted to go racing again! We like this!!

BACK TO BASICS BANGERS Back to basics. Take a wreck, take out the flammable bits, stick a cage in, and let’s go racing! The interest. Last time this was run it was part of the British Weekend last year, where Rob Mills (404) raced a new beetle! Jason Moore (739) and Jake Carless (744) were also race winners. Lots of bookings are coming in…HOT RODS After an astonishing 15 cars turned up last time out, the precedent has been set for a classic season of hot rod racing. Somethings never change as Colin White (718) took the top honours, and with it the Andy and Loreen Trophy. In his Ginetta bodied car Alistair Murray (926) certainly impressed, and wily old Steve Hunt (282) also was a race winner last time out. With the busier fields and the tight nature of the Mendips track, it won’t be as easy for the top guys to have their way! SPECIAL RODS The budget non contact racers are back, and last time out, numbers were so good, that a full format was deployed. History was made as the first BMW shell came out, as the Sierras get few and far between. Race win wise it was an emotional win for Darren Feltham (364) who won with an extra passenger – his late Uncle Paul. Andy Howard (43), Micky Ford (266) were also winners, but Scania Dave (831) took the final! Points wise, Jim Cannon (135) leads the Brices, Les (700) and Ben (701) ROBINS CRAZY DAY After the bedlam of the caravans, more bonkers robins racing as all kinds of different races are on the agenda. Dean Quinn (27) was the star of the show with 2 race wins and the Caravan race, and Cliff Worthington (437) taking the over race. The caravan race was fairly brutal, but with plenty of racers it bodes well for more wacky races than Dick Dastardly and Mutley could ever muster! Expect Ramp Races, Slaloms and the like!