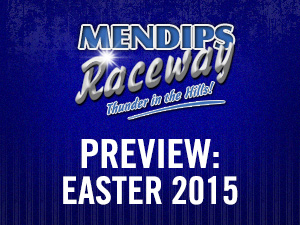 Following on from the very successful season opener, Mendips Raceway will be back in action with the traditional double header over the Easter weekend where there will be a variety of all things that small oval racing has to offer.

Easter Sunday for the BriSCA F2 Stock Cars for many years has meant only one thing and that is the World Championship qualifying round.  Not only that, the Final will be for the annual staging of the fine Gerry Dommet Memorial trophy, remembering the man who built our track in 1968 and operated it until his passing in 1998.

Over the years there has been a lot of lower graded success in this particular trophy, but not in the more recent years and 886 Chris Bradbury was the winner once again last year, ahead of him winning the track championship for the seventh year running.  It will not continue this season as Chris has decided to take some time out of the sport.  Such as his dominance been here over the past decade or more, his absence will be noticeable and will give chance for others to step up to the plate.

Local star 522 Chris Mikulla was the runner up in the track championship last year, so ought to be in position, but will face stiff opposition from 676 Neil Hooper, who was the last track champion other than Bradbury back in 2007 and 542 Steven Gilbert, whose dad Peter was a track champion back here in the 90’s.

For today though, we welcome back World Champion 1 George MacMillan, who won the Benevolent Fund trophy on his last visit here at the end of last season, and has been blazing a trail with his Gold roof and currently leads the National Points, whilst another long distance traveller and riding high in the new points chase is 606 Andrew Palmer, who has rediscovered his tarmac form this season.

From the high speed of the F2 Stock Cars to the high speed of the Hot Rods.  They will be competing for the CWS Mears Trophy, remembering former Banger racer Tony Mears.  He was a long serving mechanic to 718 Colin White.  Colin will be looking to win the trophy back, and got his points championship off to a good defence a fortnight ago when he took a heat and Final double of wins, and narrowly missed out on heat two when he was beaten by half a cars length by 788 Mark Shelper.  Despite fewer cars than hoped for last time, the racing was good, close and at times controversial.

With more cars expected this time, the anticipation is great.  The (Rookie) Bangers will complete the programme on Sunday, coming on the back of a good meetings again last year and the upshot is that there are more on this year’s schedule.

There really has been a variety of cars and drivers on the track over the past few seasons in the rookies and that is really what the essence of this form of Banger racing is all about.  It is not all about the rough stuff, that is for what we now know as National Bangers, nudge and spin is what it is all about and it’s a way of getting a car, stripping it out and having some on track fun with it and all within the reasonable safety rules and regulations etc of course.

Without the ‘fear’ of getting a nice old car wrecked before having chance to have a thrash with it, which is sometimes part and parcel with the hardcore National Bangers, we have seen several old and rare cars race in this form of Banger racing and new drivers which is good and several female competitors too, which is also good to see.

During our closed season, regular here 113 Chris Jeanes won the World Championship at Ipswich, an impressive feat and we look forward to welcoming him with the Gold roof.

Easter Monday will see a good mix of classes with the afore mentioned Van (National) Bangers, Junior Rods, Reliant Robins and the first of the year (here) for the all Sierra Special Rods.

For the Bangers, what and whom we get is still being established at the time of writing but reigning points champion 54 Tom Davey will doubtless be a big part of the action, just as he was at this meeting last year when he took a hat-trick of wins which stood him in good stead for the defence of his points championship.

The National Bangers have actually gone from one extreme to the other, with the Micro’s here last and the Vans this time, a huge difference in size but what is the same is that World Championship qualifying points are on offer.  67 Ricky Beasley took a near maximum score a fortnight ago, with 114 Liam Lake and 739 Jason Moore also scoring well.

Who is in a Van this time remains to be seen, but with big names in big vehicles, a huge entry simply isn’t needed – but this will be action and entertainment guaranteed.

For the Reliant Robins, there are the two championships once again, with the overall points up for grabs – won last year by 304 Tim Weare and the Entertainers League which was won in 2014 by 266 Micky Ford.  This is where points are totted up by senior track staff at the end of each race who has rolled or partaken in something particularly crazy (within the standard rules of course) So as ever, expect plenty of rollovers as the cars that are not really cars as remember you can still drive one on the road on a motorbike licence are driven as they were never designed to be!

The Special Rods, again now part and parcel of things here and have been enjoying some racing at the Ringwood Raceway during our closed season.  47 Richard Howard was the winner of the points last year and 85 Andy Pincott won the West of England Championship at the last meeting for them here back in October.  18 Russ Colenut will be looking to regain the silver roof he has previously held, plus as is often the way at the start of a new season, there is every chance that a newby could run away with it all from the front of the grid.

The Junior Rods for drivers aged 11-16 will round things out and there were several new faces, names and new cars last time out.  300 Charlie Ayles effectively picked up from where he left off last season with a hat-trick of wins, but, he was made to work for them.  376 Dan Kent was a good winner of the other heat, 66 Becky Pearce kept Charlie honest in the Final and 644 Ash Thompson and 285 Jacob Anderson both took some catching at various stages of the meeting.

Both meetings get under way with the traditional Grand Parade of cars at 1.00pm.