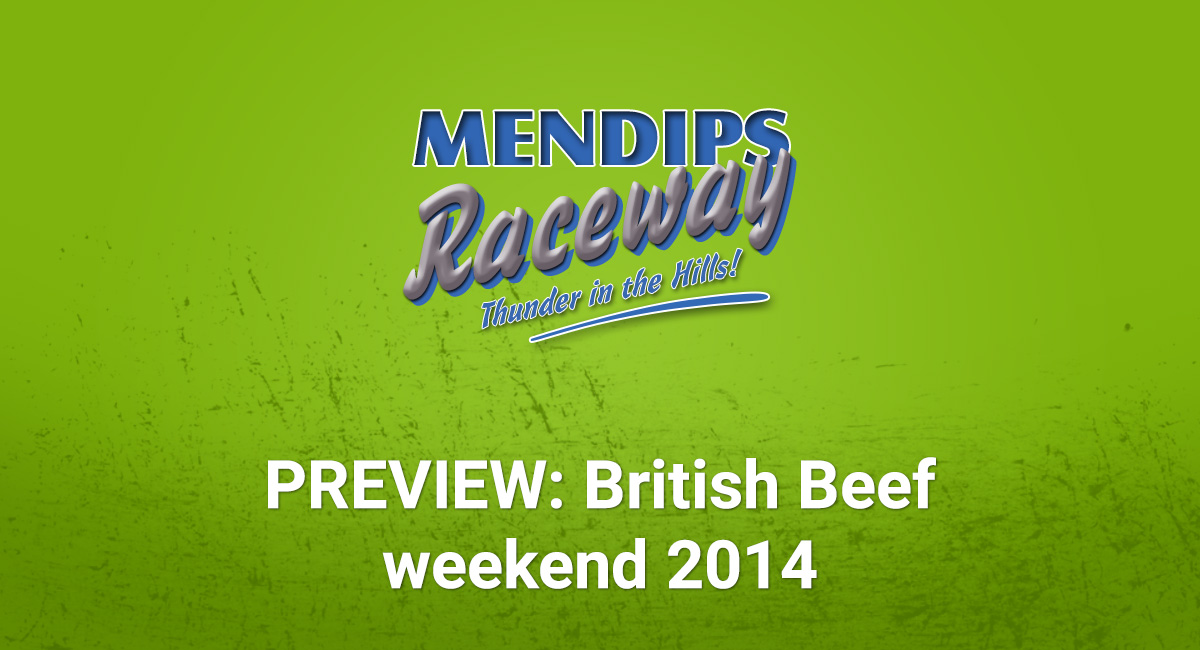 Mendips Raceway will be back in action this coming weekend with what is our annual mid-summer weekender and the only time in a season we have Saturday evening and Sunday afternoon racing together. It is an established highlight of the season, with the National Bangers taking the lead roles over both days and thus action will be the real name of the game.

Significant events they are too - with the annual under 2 litre all-Ford rear wheel drive “British Beef” session on Saturday night and then the Graham Salter Tribute, ‘Old Skool’ meeting on Sunday afternoon.

The weekend has attracted a great entry once again, it promises to be another memorable event. There once was a time when the Ford really was the staple diet of Banger racing in this country, with many tracks even running successful non-Ford meetings to encourage the build and use of other cars.

However, as times moved on so the Ford waned, and all eyes turned to the Far East although that has now of course reversed somewhat in the past decade now with the use of the (very strong!) Mondeo and Cougar, particularly with two litre meetings.  However it is the rear wheel drive that we will be seeing on Saturday, and then more rear wheel drive on Sunday, when there is looking like there will be some even older cars and therefore it really will be one to savour.

Driver wise, there is a very healthy contingent heading up from the south coast, just as they have done for this meeting and weekend over the years here and for one of the more local drivers, 59 Mike Jones, he has decided to make this one his farewell appearance and we certainly thank him for plenty of entertainment over the years here.

Last year’s British Beef was won by 54 Tom Davey, with a highly impressive show and was on his way to winning the overall points last year and leads them coming into the meeting, with almost double that of the next driver in the standings.  Therefore looking good to retain his silver roof already.

Last time, we saw the National Bangers was over the Bank Holiday weekend where 721 Carly Gabriel and 699 Stacey Holdsworth were both lady winners on the Sunday and on the Monday 739 Jason Moore scored a hat-trick on the Monday which was for Unlimited cars.  And that leads us into Sunday, where there is a definite 1990’s look to the entry, and in some cases 1980’s, just as there was when we staged this meeting last year and again it has been 'invite only' in memory to Graham Salter who died in 2011.

The list that has been put together for the meeting by Jon Ayles and Rob Mills, and unlike last year when it was a bit of a well-kept secret, it has been updated accordingly on social media this year.  As well as many of our current regular drivers there are some who are rarely seen and others who have not raced, at least not in a Banger, for a long while.

The idea is to have ‘Old Skool’ cars for ‘Old Skool’ crashing without a lot of the extra welding and tuning that goes into a ‘National’ Banger in the 21st century.   This will mean that there will be racing of a more nudge and spin variety in the heats and then more crashing in the Final and Allcomers.  This will allow the old cars, and in some cases old(ish!) drivers to get some laps in.

Last year 362 Johnny James took the win in the Final.   But with a trio of Dodge’s, a quartet of Reynolds’, other names as such almost all the 'Weymouth Wallies' including Ayles and Mills themselves, other names such as 172 Simon Bryne, 308 Mark Cooper who are seldom seen on the track side of things now and 210 Terry ‘Tello’ Harris who has not raced for absolutely years then this really is going to be something to savour.

There will be some more old machinery over both days too, as the BriSCA Heritage 1950’s cars will get a run out over both meetings.  It is 60 years since the sport of ‘Stock Car racing’ first came to these shores from the USA, and it was in cars like you will see here this weekend that the drivers took to the tracks in, firstly at New Cross in London and then the barnstorming first few years at Stadiums and tracks up and down the country, which lay the foundations for what we see today.

The Hot Rods will be going for the Parkhouse Trophy, which was won by 125 Mike Hibbert last year and he will be back to defend.  Last time it was 718 Colin White who took two wins with 258 James Griggs taking the other, whilst the points lead is with White it is very close between he and Griggs, along with 18 Larry Langmead and anyone one of these three, or 205 Mike Norton in fourth could all swap positions over after the meeting.  Thus, as ever, expect some close racing.

The Reliant Robins get a return to racing for their penultimate time here this season on Saturday, after a very successful show for them last time when they stole the show on their Crazy Day meeting, which was also a round of the Midlands Mayhem series.  Domestically, they have a points chart too and that is currently lead by 99 Steve Chappell from 504 Andrew Worthington and 304 Tim Weare, but with extra points for entertaining, expect plenty of that too.

Finally, the Junior Rods get a return to action on Sunday and have produced some very good and close racing so far this year.  Last time out 784 Henry Murray took a highly impressive hat-trick of wins and will be looking to build on that this time, but at the top of the points chart it is very close with 956 Harry Thompson’s lead only small from 362 Aaron Loader, 87 Callum Richards, 224 Jordan Edwards and 700 Ben Brice, who was also a race winner last time.

Saturday evening will start at 5.00pm, running through until dusk at 9pm.  Sunday will be the usual start of 1.00pm with both meetings getting under way with a parade of cars to put faces to the names and numbers.  Miss all this at your peril folks…