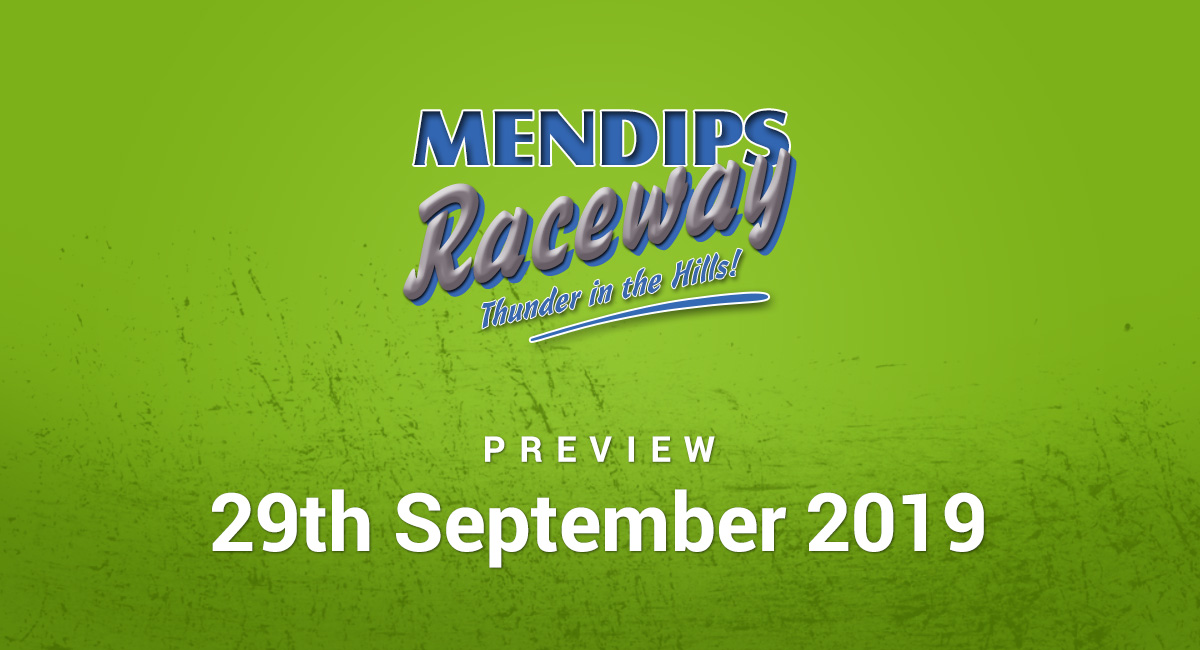 Welcome once again for the penultimate time here at Mendips for a more autumnal feel to racing. National Series for Brisca F2, more Back 2 Basics Bangers and the return of the awesome Saloon Stock Cars….

It’s the last one of the year and with it lots of things to sort out. Our finale see plenty of stuff up for grabs – the white and yellows championship has 10 tyres up for grabs, current holder 91 Harrison Bryant will be hoping to do the double after winning last year, with plenty of folk ready to go racing.

Track Championship wise, it looks like a prophecy is about to be fulfilled as leader Luke Wrench (560) has a fair lead in his early season proclamation that he wanted to win the track championship. He goes into the chase 12 points ahead of defending joint champ Matt Stoneman (127). Both of those drivers are just some of the National Series drivers here today. Sadly, its more a case of who is not, defending silver roof, and now 3 times World Champion Gordon Moodie (7) has declined to make it 14 silver roofs this year. With him and last year’s runner up Chris Burgoyne (647) absent, it makes this year’s title wide open. Andrew Palmer (606) has been a near regular and Rob Mitchell (905) has been doing more tarmac this year. We should see Jake Walker (298) and Michael Lund (995) join us for a rare trip around the Mendips. A real opportunity for some fast drivers to take a leap up the National series Points Chart!

A day for the spreadsheets, abacusi and slide rules as a healthy dose of maths will abound!

Last year we were spoilt with a double helping of Saloons, and this year there is green shoots of recovery in the Westcountry after a few barren years in terms of turnouts.

Local hopes are pinned on Junior Buster - Bradley Compton Sage (902) who has steadily risen the grades to hit the dizzy heights of star. His infamous dad Buster knew the quick way around here in his F2 back in the day. Last year, Junior took a win, along with Carl Waterfield (360), Aaryn Triggs (620), Ryan Wadling (476) and Deane Mayes (730)

Whether we see the wily old veteran Diggy Smith (116) whose return has returned a near clean sweep of the major titles, sweeping aside all those who came to challenge remains to be seen. Speaking of veterans, Taunton supremo, Phil Powell (199) will be out to be try and beat the boy Joseph (799) who has already had a final this year. Special Rod driver 556 Stuart Garland has won the arrive and drive raffle, set up by Team Sage racing. We also have a very, very special guest booked to be in attendance in the Saloons. Can anyone guess who?

Another chance for one of more successful formula of the season, numbers wise. The Monday night sharabang saw roll overs, injurys and fires, all in a thunderstorm and biblical monsoon! After a heat win for Gary Emery (881) before Dean Quinn (27) took a heat and final double with a car he finished at 6:45pm that night! So far with New points champion 262 Roona getting ready for war at Ipswich, we have 26 Robin Gold Cup Champion riding in the bangers today, as well as joint Rookie Banger Points leader 743 Jake Bond. Another day of fantastic racing awaits for the B2B Bangers!

We are back in a fortnight for the last blast of 2019, the West of England Meeting for the Juniors, Specials and Rookie Bangers – in the words of the late, great Frank Carson, it’ll be a cracker!