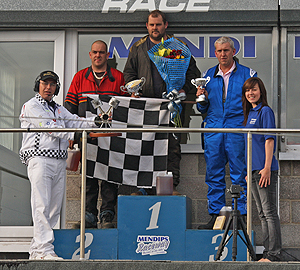 The season of racing drew to a close at Mendips Raceway on a pleasant Autumn afternoon, and really, just as it should be, it was the days three main events that were the best on the programme and with it three new West of England Champions.

The Unlimited National Banger entry was down on previous years, but this reflects the scene country wide as much as anything else.  However, it was one of good quality with many of the top local drivers present and four of the “Midnight Runners”, including double World Champion 190 Steve ‘Pikey’ Bailey.

There were some smart and impressive cars too, with the pick of them being 162 Mike Cocks in a 1953 Daimler Conquest, which unfortunately wouldn’t run all afternoon and a DS420 Limo for 202 Mike Kilford.   The opening heat got off to an unfortunate start when 270 Shaun Baker had a hefty trip into the plating, which left him feeling somewhat shaken.  239 Steve ‘Nemesis’ Carter took the victory in the re-started race.

The second heat also fell to a Midnight Runner, with a relatively rare chequered flag for 714 Paul ‘No Show’ Smaldon but this was only after 179 Stu Nightingale blew a gearbox on the very last lap when set for victory.   9 Adam Elias drove ‘Annabelle’ to victory in the consolation, all of which set the scene of the West of England.

714 Smaldon was the early leader as the opening few laps were more of a race.  However, he was deliberately knocked off course by 502 Kai May and this allowed 9 Elias into the lead.  However, with Kilford stranded on the top bend, it trigged off a pile up which accounted for both 239 Carter and Elias, as they collected 179 Nightingale too.  This pile up, some of which was accident, other by design, changed the context of the race and it put Pikey into the lead by a large margin.

Despite an attempt from 363 Sam Trim to stop him, Bailey took the flag, to add another title to his tally with 396 Scott Mowlem, 517 Scott Weldon and 741 Smaldon, all battered and ailing the only other finishers.

The annual Horace Hunt Memorial Figure of Eight was next and despite some very close calls there were not comings together on the crossover.  396 Mowlem lead from flag to flag and then in what was a relatively short and sharp DD, for the Jim Bessant Memorial, 404 Rob Mills took a hard hitting win.

The first heat for the Special Rods was decided right on the finish line when 47 Richard Howard pipped long time leader 925 Rob Parsons.  198 Marcus Goldsmith booked a front row place for the defence of his title by winning heat two and then after retiring in his heat, 42 John Mayjor took the consolation, although the harm to his points championship charge was already done.

The West of England saw Goldsmith lead off Howard and 25 Robin Bath and the race really came down between these three, with little to separate them.  It was when they hit the traffic that the chances game, and places changed as Howard got ahead of Goldsmith and then Bath managed the same.  Howard edged clear at the front, but Bath closed right in at the end.  However, Howard held on for victory and a double one at that as he secured the track championship at the same time.

The Mini Rods were a little low on numbers once again, barely making the format viable, but it was stuck with.  60 Steve Sayer took the victory in heat one and then heat two turned into a race of attrition as 22 Jordan Puddy blew his engine and several fell foul of the ensuing oil on the track.  11 Tony Munden took the win and 56 Ryan Mulley the consolation.  121 Kieran Gillard lead the West of England Final until the halfway stage when Munden took over.  However, he could not keep 501 Sam May at bay and he went on to take the victory, regaining the title he won in 2007.  Munden was second and 43 Sam Howard third, whilst Sayer’s fourth place was enough for him to secure the points championship. 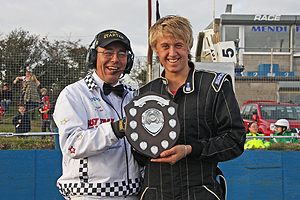 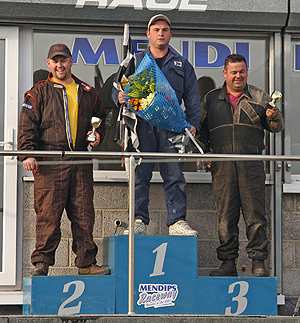