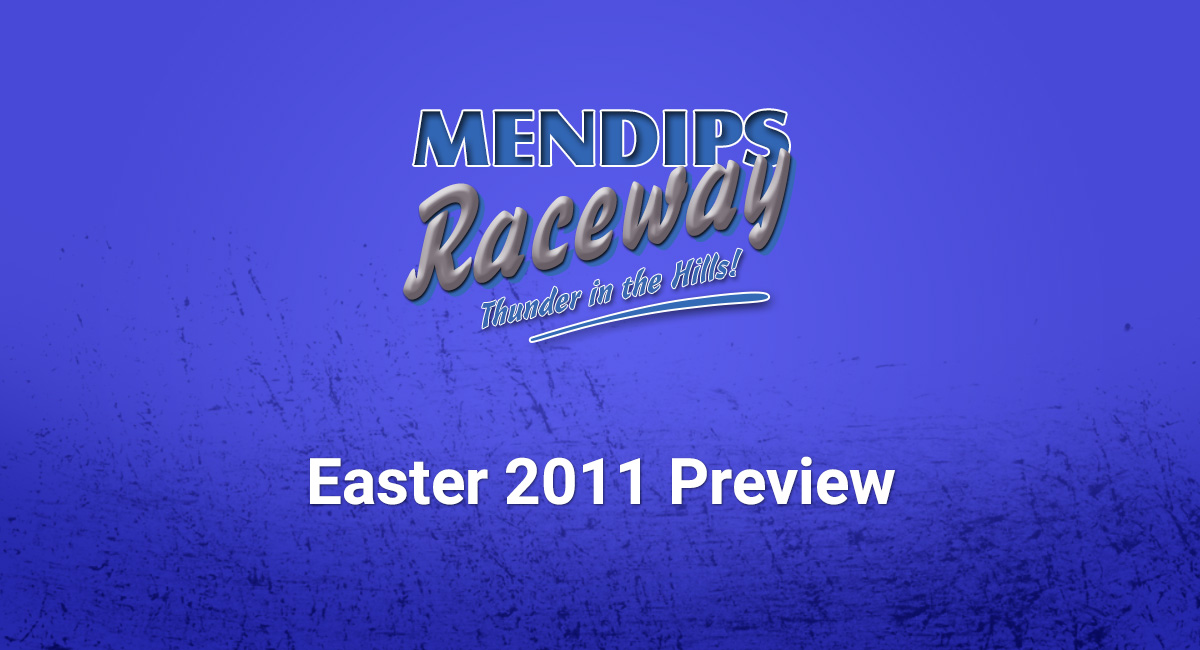 Mendips Raceway will be back in action over the Easter weekend with the highlights being the BriSCA F2 Stock Cars World Championship qualifying round on Sunday and then the third running of ‘Matches and Dispatches’ for all Hearse and Limo National Bangers on Monday.

Easter Sunday for the BriSCA F2 Stock Cars for many years has meant only one thing and that is the World Championship qualifying round.  Each venue that stages the F2’s has one round apiece and today it is our turn, and even with Easter being so much later this year it comes as only the third round this year and the first on a tarmac track.  Not only that, the Final this afternoon will be for the annual staging of the fine Gerry Dommet Memorial trophy, remembering the man who built the track in 1968 and operated it until his death in 1998, as well as being a pioneer and leader for the sport almost since its arrival on these shores back in the 1950’s.

Over the years there has been a lot of lower graded success in this particular trophy, but last year it came down to quite a star grade shoot out and it was 152 Mick Sworder who took the win.  Nobody knew it at the time but it was to be the last feature race win for him in F2’s, at least for now for the former World Champion as he has moved into the BriSCA F1 Stock Cars this year and thus will not be with us.

The other two in that battle will be though, the iconic 218 Rob Speak and triple track champion and the real current maestro around this unique track 886 Chris Bradbury.  It will not be plain sailing though, there are plenty of other potential winners across all the grades and with drivers coming from all four corners of the country it should be a thrilling start to the Stock Car season here.

From the high speed of the F2 Stock Cars to the high speed of the Hot Rods, who were in good form at our opening meeting last month, none more so than the former multiple World Champion 718 Colin White, who went undefeated on the day.  They will be racing for the CWS Mears Trophy, remembering former Banger racer Tony Mears.  He was a long serving mechanic to Colin who won it in 2009, but was unable to defend last year so will be looking to take it back this year.  It was 262 Brian Loram who took the win on what was his return to racing last year.  Others to look out for without doubt will be 83 Andy Beaven, 89 Mick Cave and 903 Wilson Hamilton who are both more than capable of matching White on their day.

The Rookie Bangers will complete the programme on Sunday, coming on the back of a good meetings again last year, and this will again be the first of three here for 2011.  There really was a variety of cars and drivers on the track last season and that is really what the essence of this form of Banger racing is all about.  It isn’t all about the rough stuff, that is for what we now know as National Bangers, nudge and spin is what it is all about and it’s a way of getting a car, stripping it out and having some on track fun with it and all within the reasonable safety rules and regulations etc of course.

Without the ‘fear’ of getting a nice old car wrecked before having chance to have a thrash with it, which is sometimes part and parcel with the hardcore National Bangers, we have seen several old and rare cars race in this form of Banger racing and new drivers which is good and several female competitors too, which is also good to see.  396 Scott Mowlem ended up as the points champion last year and it was 113 Chris Jeanes who took Final victory at this corresponding meeting last year, and he will be back again this year along with a host of others on what looks to be a split hear format and qualifiers only Final.

On to Monday and you might be forgiven in thinking that the humble late 1980’s and early 90’s icon the Ford Sierra has had its day.  However, that isn’t the case as the entries for the Special Rods have once again come in well over the closed season, and if the March meeting was anything to go by we are in for another great year from them.  The new format where a driver races in two from the three heats worked well too, and guaranteed each driver three races. The nature of the class also often means that a quick lower grader will get away, and there are several new faces around this year, so what is to say that one, or more of them could spring a surprise on the establishment?  Last time out it was a good day for the Stuckey’s as 22 Jack took a heat win and his uncle 23 Ross took the Final ahead of 10 Stephen Hine and 47 Richard Howard whilst the other heat victors were 13 Paul Robins and 39 Craig Harris.

Once again the Hearses and Limos will be the feature of the National Bangers for the “Matches and Dispatches” meeting, and this year it also takes on the form of a testimonial for John ‘Wusty’ Worstencroft who retired from racing after a long career last year, and was the winner of this last year.  There will also be the draw for the ‘Grab a Granny’ raffle if you took part in that during the second half of last season.

As ever there are some very big cars set to grace the track for this, with Daimler Limo’s and Hearses as well as the Granada versions of both, which are big enough in themselves!  This meeting also sees the official launch of FORDS, the Fund for for Oval Racing Drivers and Staff, and its organiser and Chairman Dave Pierce will be here, with some of the Trustees-of which Wusty is one, to tell us all about it.

From one extreme to the other, the Reliant Robins will have their fun on three wheels and once again a good entry is expected where the ones to watch could will be 87 Barry Richards, a driver of vast experience in several formulae and just races for fun these days but he was pipped to the points last season by 78 Mark Bowskill with 444 Mark Loader not too far away.  As time goes on, a lot of those who have not really raced anything before have really started to get the hang of things and could well be capable of upsetting the form book.  But as ever, expect plenty of rollovers as the cars that are not really cars (remember you can still drive one on the road on a motorbike licence) are driven as they were never designed to be!

The Junior Rods will round things out on Monday, and thus the dawn of a new era as they replace what we did know as the Mini Rods.   There will still be plenty of Minis on track, but with the trusty but now old small cars run low it was time to look for others and therefore it has been opened up to other cars under 1000cc.  There were a few running experimentally last season.  We ran an assessment day for new drivers two weeks ago and that saw nine of them go through things, added to those who are back for more bodes well for things in the year and times ahead.

Both meetings will begin with a grand parade of all available cars at 1.30pm.