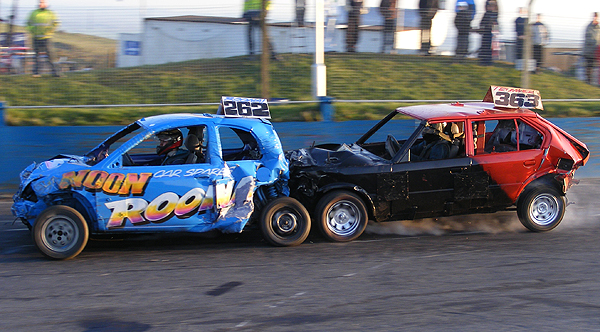 The opening meeting of 2012 was run in bright sunshine and dry weather, despite the early gloom, mist, and overnight rain, and although it was cold on the banks, a good crowd attended to watch a three formula meeting with something for everyone.

Before the meeting began, all the cars and drivers assembled on the centre green to an immaculately observed one minutes silence to mark the passing of Ian ‘The Steamer’ House, who was a long serving banger racing fan with an encyclopaedic memory who had lost his life tragically in the preceding week.

The Junior Rods were having their first outing and the honours were well shared with Dan Steeds(796) driving his brother William’s Mini, and Sid Harrison (510) taking the heats, and Macauley Mills (404) the Final. Yet another winner took the Allcomers- Zoe Cambridge(273), but this race was marred by a crash which left most improved driver Sam Crane (24) in some distress.

There were eight Hot Rods, and Points Champion Steve Hunt(282) started his campaign well with two wins in the heats, but a thrilling race ensued for the Final with Colin White(718) eventually overtaking him with five laps to go after many laps side by side. Dave Tossell(117) had a good day with a second and two third places. The Hot Rods will be back on Easter Sunday with the CWS Mears Trophy.

Fifty two assorted Micro Bangers were present, leading to two split heats of 26. There was a variety of cars, from a Mazda 32 from Simon Sparrow(920), a Lada 1200 from Young Sherlock(315), and a second Hyundai Pony for Sam Trim, and a returned Mk 2 Escort for Mike Cocks(162) among the most unusual, but many drivers had taken advantage of the rule permitting just one 1300cc car, the Ford KA, and these made up half the entry. With half car heats, and 12 to qualify, the first heat was fairly quiet, and was won by newcomer Kevin Ealson(329), but the second one was much more action packed with a track blockage and only three finishers, won by Sparrow  from Arry Brown(113) and Steve Ashby(508).

The consolation still raised a very good field, and once again there was a track blockage with absolutely everybody steaming in until there were no cars running, to the delight of the pit bend crowd! A much reduced field took part in the re run won by Jim Astell(135) in his old skool Micra-his first win. The decision was made to run an all in Final, and yet again a good field turned out, for another destructive affair in which sole Wally Danny Allen(311) steered his way through the chaos to the win, with Trummer and Weldon his placemen, and the only other finisher was Cocks.

It was decided to drop the Allcomers in favour of a straight Destruction Derby, as there were thought to be few cars available, but yet again over twenty cars drove out of the pits to take part! There was a stoppage for Micky Plum (801) who was winded after a big shot, but then it looked like Allen might be the last and strongest runner, but his car cruised to a halt, and it was left to Roona(262) and Trummer to settle it with a huge head on crash, from which only Trummer backed off to claim the win-emulating his 2011 DD win. A great start to the 2012 season.

Our next meetings are Sunday April 8th, and Monday April 9th-both start at 1.30pm

18th March 2012 - CLICK HERE to see the full set in a slideshow at flickr.com