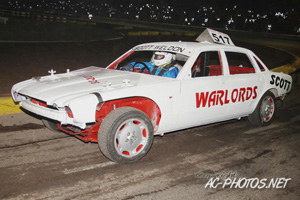 The Unlimited Banger Championship of the World on Saturday October 15th at Foxhall Stadium Ipswich has come and gone for another year.

The meeting took the form of three last chance qualifying races, each of which raised over fifty cars, in which Jack Holmes (315), Paul Barnes (210) and Jason Burt (445) took part for Mendips Raceway, with Barnes leading his race for several laps before being spun out of contention, with only the winner progressing to the main race.

When the public draw took place, Pete Stanley(40) drew number 2, and Scott Weldon number 11, on the grid of 55 cars.

The race was stopped after two laps, and completely restarted, and Pete ran with the front group for many laps before having to retire with mechanical problems.

From his grid 11 start, Scott Weldon completed the race, just outside the top ten places, and it was won by popular driver Shane Davies (158) for the second time in his career. Highest placed west country driver was Steve Bailey(190) who finished fourth.