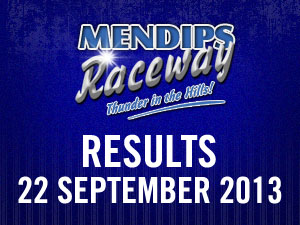 The penultimate meeting of the season at Mendips Raceway came, but with it one of the highlights of 2013 with the first appearance in their modern guise of the National Hot Rods and with it the last appearances of the season for the BriSCA F2 Stock Cars and National Bangers, all on a dry, mild if cloudy afternoon.  With lots of cars, it was set to be a busy day.

Whilst Hot Rod racing has long been part and parcel of things at Mendips, this was the first time the National Hot Rods came for an official visit and with it the fourth round of their 2014 World Series, scoring points towards their big event at Ipswich next summer.  The drivers came from all four corners of the country including 117 Rob McDonald from Scotland and 940 Gary Woolsey from Northern Ireland, who both compete in the ‘English’ World Series.    There had been some fears that the track would be too narrow and/or generally not suitable for the high speed cars, but these were found to be totally unfounded and the four races were all very good, with plenty of clean overtaking.  This included the first heat which was a very fierce contest, but all behind McDonald who took the victory.  The second heat saw the Scot get into the lead early on once again but this time had big pressure from 174 Jason Kew.  When the pair came up to lap back markers 339 Danny Hunn and 718 Colin White (yes, the domestic track champion was in attendance) it was a job to know where any of the quartet could put their cars.   Kew saw his chance on the very last corner and made his move up the inside and the pair clashed as they crossed the line.  McDonald just held on in a very close finish.   The third heat saw 305 Billy Wood hold off pressure from both 115 Chris Haird and 42 Shane Bland to take the victory.   The 35 lap Final was headed off by 152 Shaun Taylor until McDonald moved past with Haird in second with plenty of good dicing in the pack.  This came to a halt when 100

DickieBurtenshaw’s engine blew a hose and he crashed on his own now wetted tyres to bring out the yellow flags.  As has been written and said many times, yellow/caution flags breed more of the same and this was the case here with a further three periods.  The first after Bland and 92 Jack Blood crashed and then with 209 Kym Weaver stranded on the track.  McDonald led all the time, chased by Haird but when he had a moment on the home straight and lost several places it looked like McDonald had got it in the bag.  The was until 39 Terry Hunn spun on turns one and two to bring out another yellow and set the race up for a three lap dash.  Kew was now the one to put the pressure on McDonald again but try as he might, it was to be Rob’s hat-trick of wins, made all the more impressive in the Final as it transpired he was nursing a wrist injury from his crash at the end of the second heat.  Kew was therefore second to complete a good day for him and 304 Danny Fisk was third. 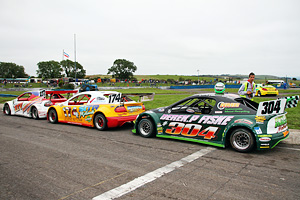 With a clashing meeting for the BriSCA F2’s at Northampton, it did take a few otherwise potential attendees there, but there was still plenty of regulars present including new World Champion 783 James Rygor who not only debuted the gold roof, but a new (to him) car too.  One who was missing though was six times track champion 886 Chris Bradbury, who missed his second weekend of racing through illness.  The first race was the 2013 Final of the Rookies Reward.   Winner of two of the three qualifying rounds was 464 Matt Linfield and he looked set for victory.  However his engine went sick with two laps remaining and 290 Jay Tomkins sped past to win with 53 Phil Mann second and Linfield holding on for third.    116 Ashley Rundle held off 676 Neil Hooper to win heat one and then in heat two white graded 734 Glenn Sanders held on all the way to win whilst heat three saw Hooper catch and pass Linfield in the closing stages to win.  The Final was led by 627 Gary Sillifant until the closing stages when Hooper went past and went on to win to round out a very successful day for him.  126 Jamie Avery made second and 522 Chris Mikulla third and it was the latter who came through to win the Grand National.

The National Bangers were present for the first time in almost three months with the last World Championship qualifying round in an under 1800cc format.  As expected the car of choice was mainly the Ford Mondeo and there was quite a cosmopolitan entry including three from Wales and a very strong showing of those from the south coast.  With at least six drivers up for the two qualifying places at Ipswich next month it was always going to be hotly contested stuff.   However, the day was somewhat blighted by some who in their efforts to stop them and/or team mates from going through resorted to attacking on the centre and off of the centre.  This is something strictly taboo of course and as a consequence several drivers found themselves disqualified for the remainder of the day and perhaps with further penalties to follow.   Another who blotted his copybook was 54 Tom Davey, the now two times points champion who found himself with the same penalty and possible outcome with his attack on 27 Dean Quinn.  Whilst all this was going on 67 Ricky Beasley won heat one and 252 Steve Buglar heat two.  In the Final it was 262 Rob Buglar who took the win ahead of Beasley and 252 Buglar and with the brothers ‘Boogie’ and ‘Roona’ coming in second and third behind Beasley in the Allcomers it meant that it will be they who get the seeded places into the World at Ipswich. 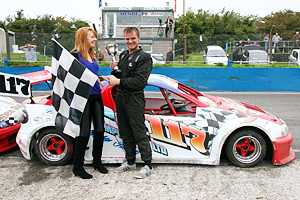