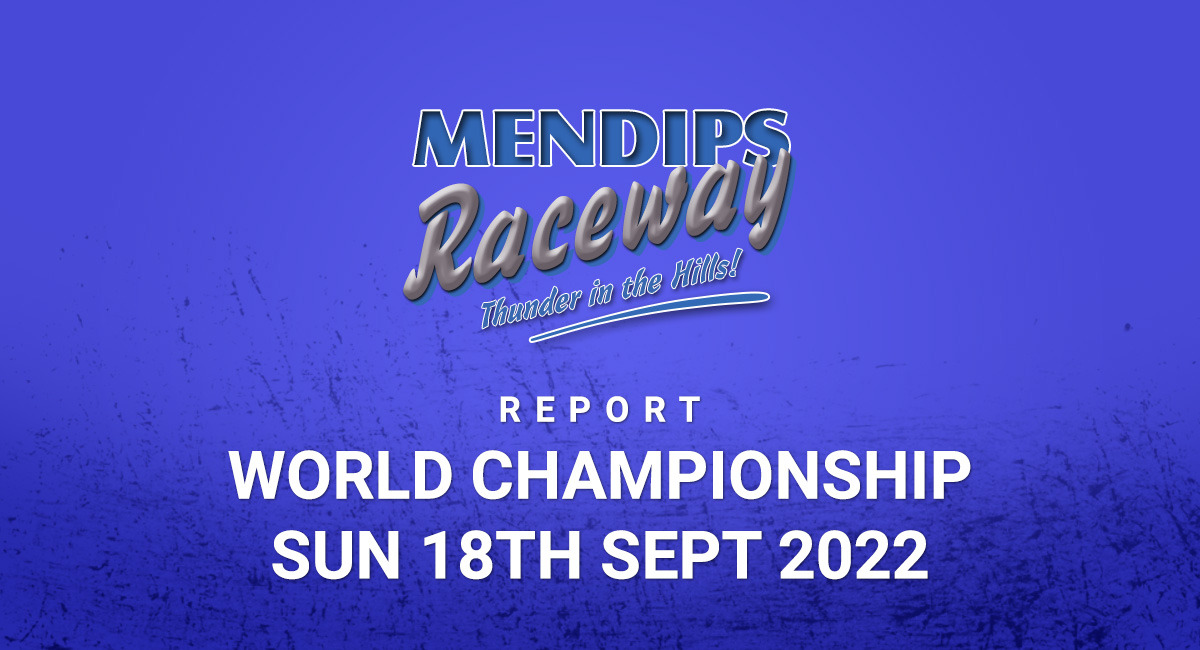 It was a dry afternoon for the 52nd running of the P.R.I. National Bangers World Championship, with two Drivers competing from Belgian. 26 Drivers from different promotions were seeded into the World Final with the top 6 from the two LCQ races also joining the grid, most of the cars were very smartly presented, and amongst the mix of cars 743 Jake Bond had a very smart Ford Cougar, and 961 Brad Deeprose had a very smart MK1 Mondeo.

22 cars came out for the 1st LCQ, and amongst the action 3 cars had a coming together on the 1st corner before the start line, and 160 Jamie Warr jacked the parked cars with 82 Joe Gingell jacking up Warr then later another car joined the party!! Deeprose went on to take the win from 238 Jack Hughes then 314 Luke Rawlins.

27 Cars came out for the 2nd LCQ, which got off to a very lively start and 25 Matt Black got turned around and got stranded facing the wrong way, then 813 Troy Goodwin had a multiple Rollover, 280 Harry Ricketts led the re-start then 213 Tony Roe turned around and hit 183 Simon Goodwin head on, then Goodwin jacked up Roe, then there was a stoppage as 727 Keiren Ritson and 252G Michael Hudd had a coming together. Only six cars made the re-start led by Rickets who disappeared into the sunset at the green!! 412 Hayden Galley was struggling with his car badly crabbing!! And the other four cars were having a good scrap for 2nd and 132 Archie Cullum spun 99 Ryan Hall out, only six cars made the distance with Rickets taking the win and Galley spinning across the finish line!!

All 38 qualifiers took the grid and Galley had managed to straighten his car out! with a public draw for the grid positions 111 Tommo drawing pole position with 49 Ash Harvey alongside him in 2nd, then there was a minutes silence for the Queen before the action got under way. Tommo led from pole and amongst the action 564 Jack Priest and Deeprose rolled at the same time on the back straight!! Tommo led the re-start from A.Harvey, and Rawlins car was badly crabbing, then A.Harvey forced his way past Tommo to take the lead, then as Tommo tried spinning A.Harvey out 178 Kieran Bowman nipped up the inside of both to take the lead!! Bowman then built up a big lead and 252 Boogie made it up into 2nd then lost power, then 262 Roona caught and passed Bowman then there was a stoppage. Roona led the re-start, from 133 Terry Hill, then 2 Jack Hodges, then Roona lost power so Roona decided to jack someone up, and Hill took the lead, and coming out of the last corner 3 cars came of the infield and one car hit Hill head on and triggered a pile up and Hodges snuck through to take the win, leaving Hill perched on the infield banking!! As Hodges was the only car running, Hodges was declared the winner with Hill 2nd and 610 Devon Usher 3rd.

40 cars came out for the 1st Allcomers race and there was a big pile up on the turnstile bend and 11 James Hooper ended up on his side, leading to a complete re-start, only 16 cars made the re-start and amongst the action Hodges decided join the pile up then 221 Ted Harfield decide to pile in as well, then Hodges turned it around giving Lake a head on and triggering more action on the turnstile bend only 5 cars made the distance with 270 taking the win.

34 cars made it out for the 2nd Allcomers race and there a big pile up on the 1st bend and Tommo ended up on his side, leading to a complete re-start, 20 cars made the re-start with Boogie’s car badly crabbing, amongst the action Booige had a head on with Black, and 595 Drew Burdett got spun around then Ritson jacked him up!! And there was a pile up on the pit bend and the race turned into a D/D, with only cars moving and the track blocked the race was declared going back to the last completed lap with Hill taking the win from Deeprose, then Bowman.

25 cars made it out for the D/D there was a stoppage as 440 Big Mac’s car had a fire only six cars made the re-start and it ended up with 868 Stuart Parish’s car struggling and 22 Ash Ridges giving Parish a big jacking up, which killed both cars and Ridges was declared the winner.

16 Saloon Stock Cars turned up including 620 Aaryn Triggs all the way from Scotland, and 238 Alfie Aldous from East Anglia. In the 1st Heat 10 Frank Little led from pole, and 418 Mitchel Driver was quick from 4th to 2nd and 199 Phil Powell and 799 Joe Powell both got spun out, then 319 Richard Regan got turned around and was collected head on by 277 Jack Grandon, further back 677 Warren Darby was making good progress from near the back dishing out some big hits and made up to 2nd but Little was to far ahead, and in the battle for 4th 902 Junior Buster gave Aldous a big hit sending him near to the fence to take 4th, and Little went on to win from Darby, then Driver, then Buster.

The 2nd heat had a messy start and Buster got spun out before the green flag, so a complete re-start was ordered. On the second attempt the bumpers was really flying and Little led from pole and built up a big lead, with Driver in 2nd, and amongst the action 720 Archie Brown got spun out, Aldous had a half spin, and Grandon ended up facing the wrong way Darby was again flying from the Reds dishing out some big hits, and on the last lap Darby shoved P.Powell wide for 3rd and Aldous and Buster crossed the line side-by-side, Little went on to win, and Driver was docked two places giving Darby 2nd, from P.Powell, then Driver.

14 cars survived for a hard-hitting Final Little led from pole and with Driver in 2nd, Triggs got spun out, and Brown got very sideways but managed to hang on!! Grandon made it up from 12th to relieve little of the lead, then Aldous gave Driver a big hit to take 2nd, then Darby gave Aldous a big hit to take 2nd, and on the last lap Darby knocked Grandon wide to take the lead, then on the last corner Darby went wide and Grandon nipped up his inside, and Darby and Grandon crossed the line side-by-side, Darby was declared the winner from Grandon, then Aldous,, then Buster, then Little.

15 cars came out for the 1st Heat and 770 Austin Farrell took up the early lead from 2nd on the grid, then there was a stoppage as 3 cars spun on the pit bend. A.Farrell led the re-start from 567 Mia Batten, and 617 Christina Sillifant got spun out and was collected head on by 902 Cadan Davies, then K.Williams got spun out, then Batten, punted A.Farrell wide to take the lead Batten went on to win.

A.Farrell took the early lead from 2nd on the grid, and 467 got spun out, then Sillifant got turned around and was collected head on by 207 Alfie Fleckers, A.Farrell led the re-start from Faulconbridge, Batten got sup out and 467 ended up on his roof Hemmins led the re-start from 954 Bobby Beere-Rees, Faulconbridge spun A.Farrell, then Beere-Rees spun Faulconbridge, and Bradford made it up to 2nd then broke down, Hemmins crossed the line 1st but was docked two places for starting in the wrong place, on the re-start, so Brimble was declared the winner, from 902 Cadon Davies, then Hemmins, then Falconbridge.