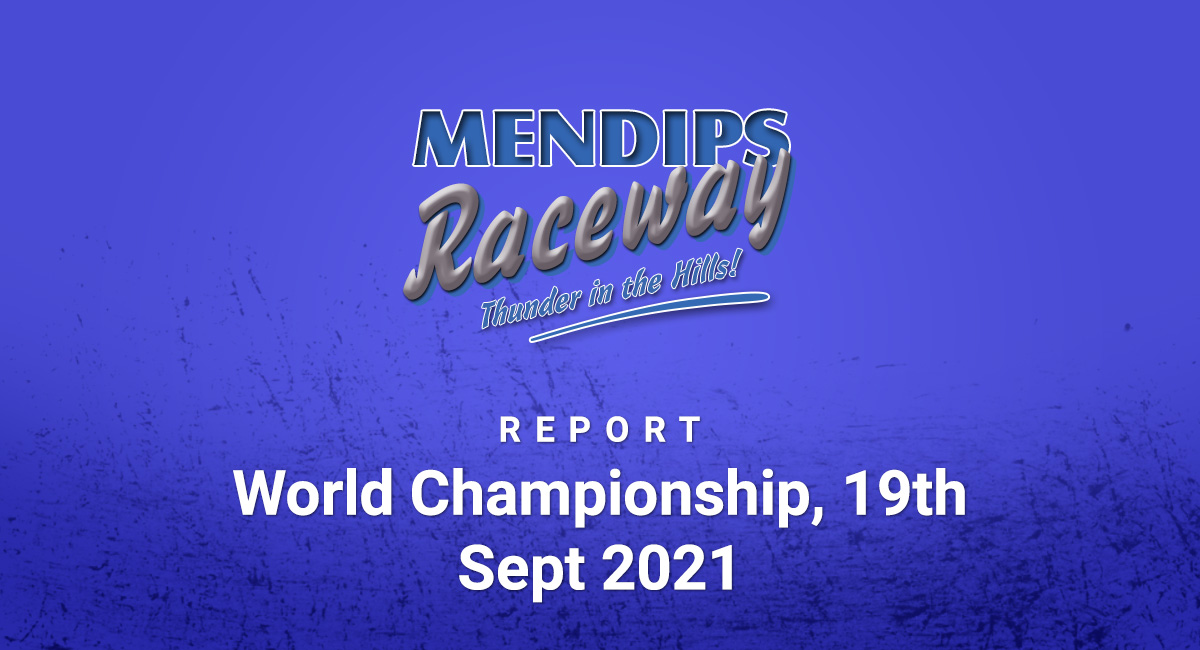 Tension was high this morning for one of the biggest race meetings for Mendips Raceway. The weather wasn’t looking too favourable as a couple of light showers made track conditions changeable .

Some well dressed Bangers were on show with a good selection of team colours and sign painting. Most drivers option in for estate to help the ease of impact. Noddy was the only Gladiator present at the track. 743 Jake Bond got the memo and came with a rather smart looking Jag. By the end of the meeting most drivers including Lakey went home with square metal boxes that look like they have already been through the car compactor.

The day has arrived, and for some who didn’t qualify it was the last chance saloon. 18 cars came out for round one. 73 Dean Cruickshanks after negotiating through the pack and kept pole for majority of the race. The action began on the pit bend with 240 Courtney Warr received a huge jacking, which cause collision after collision. 6 cars made the distance and 109 Chris Neville took the win from, 624 Liam Hyde.

Round two of the last chance qualifiers saw 20 cars come out. Throughout the race there were a lot of hits around the entirety of the circuit. A pause to proceedings happened when 842 Jack Perkins lost a wheel. Amongst the action 999 John Picton jacked 183 Simon Goodwin, within minutes a jacking train emerged involving 813 Troy Goodwin, 121 Aaron Jennings, and 177 Charlie Edgecombe, only four cars made the distance (Top 5 qualified). 327 Syd Sherman took the win from 166 Connor Charlton.

The big finale was here, 37 cars qualified for the National Banger Championship of the World. In a twist of fate two cars broke down in the pits  before the show began. MacCauley Mills 440 lead the remaining drivers for the parade lap. As was tradition  their grid positions were picked out of a hat at random. Once they were all lined up, it was flags down and away they go with Sherman taking the early lead from pole. From behind 623 Rick Hutton scurried past to swipe the pole from underneath him. Meanwhile, the reigning champion Macauley was on the receiving end of some hard shunts from the boys in grey and blue. Out for justice, they rammed him into the wall! One after another, a pile up was created, leaving the front runners to push and shove their way through the pack. 841 Tom Perkins managed to hunt down the two front cars. Leading them straight into the pile up he made his way up to pole position. With 5 laps to go Perkins got tangled up trying to navigation the increasing pile of cars, and with that lost the lead! Coming out on top, 743 Jake Bond took the win, flying past everyone in the last few moments.

25 cars came out for the 1st Allcomers Race there was again a lot of big hits going in, and 838 Jamie Peters was the only car left running and made the distance, and the car was so badly twisted he struggled to get it to the finish line and spun across the finish line!! 18 cars came out the 2nd allcomers Race, there was a lot of hard hits going in again, and there was a pile up on the turnstile bend, and Perkins was receiving a lot of attention!! 252 Boogie’s car was so badly crushed it looked like it had already been through the crusher!!  Only 4 cars made the distance and 99 Shaydy Gough took the win. 14 cars came out for the D/D there was a lot of big hits going in and there was a stoppage to get to check on a driver, then there was another stoppage as a car caught fire then they was just about re-start another car caught fire, then C.Edgecombe fired someone into the wall and C.Edgecombe needed medical attention so the race was then abandoned.

In the Special Rods their Championship is almost finished with only one more round to go. There was a lot of stiff competition to get the final points remaining. Today they were running a 2/3rds format, meaning 13 cars came out for the 1st Heat 46 Angie Harris took the lead from the start and continued to keep the pace. 445 Nik Loader quickly moved through the field to take 2nd immediately being stole from them by 26 Leah Bennett by nipping up the inside. Harris took the win from Bennett, then 44 Sam Howard for 3rd.

Heat two saw 15 cars out on track with 46 Angie Harris taking the front early on from 2nd position. 43 Andy Howard and Bennett made contact with Bennett heading towards the wall. A 5 way battle was brewing for the top title between Harris, 40 Pete Stanley, 60 Tom Bristow, 701 Ben Brice, and 303 Jason Oliver. Stanley went round the outside of Harris to steal the lead, however coming from behind and steaming his way through was T.Bristow who passed Harris, and then Stanley. Battling side by side across the line was B.Brice and J.Oliver in a last ditch attempt to grab points. T.Bristow took the win, with Harris, B.Brice, and J.Oliver trailing in 2nd, 3rd and 4th.

14 cars came out for the 3rd Heat ready to battle it out once more. Stanley took the early lead, from 175 Kevin Oliver, with 135 Jim Cannon not too far behind. A.Howard was quick through to make his way up to 2nd fuelled on adrenaline A.Howards nipped up the inside of Stanley for pole position. Stanley soon had to pull onto the midfield due to a misfire and retired from the race. A.Howard took the win with his son S.Howard in 2nd, then B.Brice coming through for 3rd.

After the PRI it was the finale for the Specials. A jammed packed field of 20 cars came to the track. Harris took the lead early, but it was taken away by Stanley who managed to get the car back up and running. Finding a window of opportunity they shot past Angie. 61 Beth Stevenson, and A.Howard followed in Stanley footstep and passed round the outside of Harris for 2nd, and 3rd. Bad luck arisen again for Stanley as they had to retired once again with a misfire. Struggling for grip the cars started to slide on the turnstile corner with 100 Thomas Weeks losing it and spinning in front of T.Bristow. They shortly crashed into S.Howard and 517 Scott Weldon, who had to retired with damage. More damage happened as A.Howard and Bennett both hit the wall, and 275 Jack Buckingham accidently running into the back of Harris due to the sudden stop to proceedings. The race was declared, with only 8 cars left in the race. Stevenson was declared the winner from S.Howard, then Harris in 3rd.

For the last time this meeting, 19 cars came on track for the Grand National. S.Howard zoomed passed from 3rd on the grid to pole. A.Howard made it up to 2nd with scrapping happening for 3rd. 135 Jim Cannon broke free to claim the position, however it wasn’t long and A.Howard advanced up the inside of S.Howard  for 1st. Buckingham got pushed round the pit bend wall, and it was all happening up until the last lap where T.Bristow had a tank slapper. Everyone done well to avoid him as he saved it! A.Howard took the win, S.Howard followed for 2nd then Cannon for 3rd.