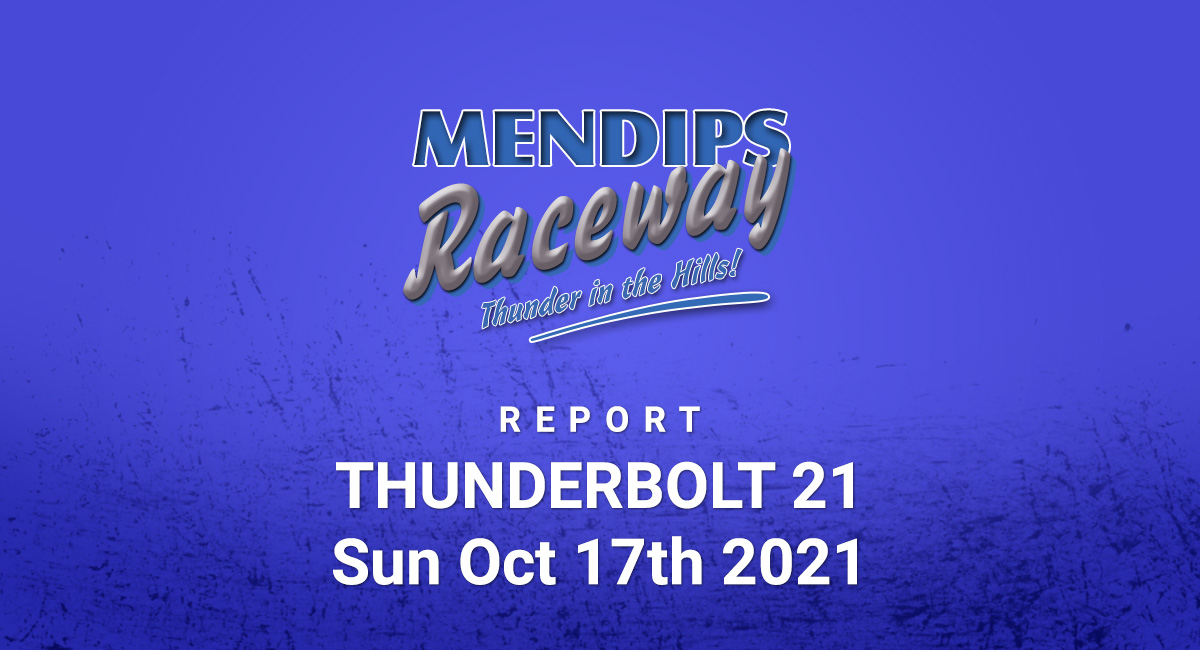 It was a dry afternoon with dry drack conditions.

33 National Unlimited National Bangers turned up, and they were split into two Heats. There was the usual mix of cars with a lot of Estate cars, and Jag’s.

Amongst the action in the 1st Heat 333 Charlie Randell gave 7 Jamie Charles a massive jacking up!! 400 Lee Kingsnorth went on to take the, win from 103 Lee Bugler. Amongst the action in an action-packed 2nd Heat, 275 Liam Best was receiving a lot of attention!! 816 jack Weeks and 411 Jack Eggleton had a head on, and 278 Shaun Brokenshire gave 622 Leon Weeks a big jacking up!! Only 6 cars made the distance, and in the race 32 Callum Reed passed 252 Boogie on the last lap to take the lead then on to win, from 739 Jason Moore.

25 cars made it out for the THUNDERBOLT21, Kingsnorth took the early lead from pole, and 290 Stefan Bailey was on the receiving end of a massive Jacking!! Then 129 Lee Dalton was put on his side and one driver didn’t have time to react and accidently hit his roof, resulting in a stoppage and thankfully Dalton was ok. Kingsnorth led the re-start, from Reed, then 284 James Head, then Kingsnorth T-Boned 2 Jack Hodges, then Eggleton got spun into the wall, and 67 Ricki Beasley gave J. Hodges a massive jacking up!! Head went on to take the win, from 262 Roona, then L.Bugler.

22 cars made it out for the Allcomers Final including Best who done well go get his car back out. In an action-packed race with most of the big hits going in on the turnstile bend the track was nearly blocked and there was a single file route through the pile up!! Only 5 cars made the distance, and Beasley took the win from Kingsnorth, then 440 Macauley Mills. 12 cars made it out for the D/D, which finished with 262 Roona, jacking up L.Bugler, and Roona was the only car left running.

Only 11 Brisca F2’s turned up, In the Whites and Yellows Final 762 Mike Cocks led for a while, then 398 Ian England nipped up the inside of Cocks for the lead, then Cocks and 128 Jack Bunter had a coming together, 398 Ian England went on to win from, then 976 Dan Kent, then 605 Richard Andrews. In the 1st Heat Cocks led for a while before Andrews took up the running, Andrews went on to take the win, 522 Chris Mikulla crossed the line 2nd but was docked two places giving 667 Tommy Farrell 2nd, from, 302 Dale Moon. In the Final 928 Lauren Stack took the early lead and Bunter made it up to 2nd, then Farrell passed Bunter for 2nd, then Moon and Mikulla shoved there way passed Bunter and Bunter clipped the fence, and with 3 laps left Farrell passed Stack to take the lead then on to win, with Moon in 3rd, and Mikulla 4th. 8 Cars came out for the Grand National Stack took the early lead and led for a while before Andrews took up the running, then Andrews went wide and Moon didn’t need a 2nd invite with 935 Nathan Maidment slotting into 2nd, on the last lap Mikulla tried a last bender on Maidment and missed and hi the wall!! Moon went on to take the win from Maidment, Mikulla. 667 TOMMY FARRELL HAD SCORED ENOUGH POINTS TO BECOME THE TRACK CHAMPION.