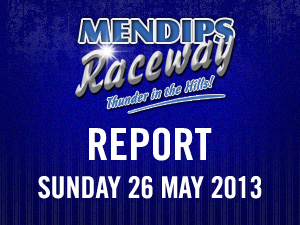 The first day of the Bank Holiday weekend was blessed with the same beautiful blue skies that we saw at the previous one and it kicked off with the BriSCA F2 Stock Cars, National Bangers under 1800c and the annual Crazy Day for the Reliant Robins.

Despite a clashing fixture at St Day in Cornwall that took away a few regulars, the 30 car entry was pleasing and included several who had travelled a long way to be present and two that were on their first appearances at Mendips.   The second round of the Rookies Reward was first up and went the same was as round one with 464 Matt Linfield taking the victory.  522 Chris Mikulla then won heat one and Linfield just held off 886 Chris Bradbury to take heat two.  963 Lee Carlin was the winner of the consolation.   The Final was led by 53 Phil Mann until just before the halfway stage when Linfield took over but by then Bradbury was already looming large and moved into the lead a lap later, just as the yellow flags were shown when Carlin was stranded on the bottom bend.   From the re-start it was plain sailing for Bradbury who went on to take his third Final from three this season and with it defend the Marion Bennett Trophy.  Mikulla made second and Linfield was third.   The Grand National saw Linfield until the very closing stages when he was heavily dispatched into the plating by Mikulla who went on to win, whilst Bradbury came through for third place and thus double points and money from his lap handicap.

There were one or two regulars missing in the Robins, but there was a surprise appearance from World title holder 1 Allen Cooper all the way from Cambridge, and brought 664 Ryan Sutcliffe on the journey with him.   The only ‘straight’ race of the day saw 499 Lee Charles come through for the win whilst the biggest roll of the race came from 119 Stacey Howe.  The second race was the anti-clockwise race which made such a difference to the speed and handling.  Charles however mastered it so well he lapped the entire field on his way to victory.   The Pairs race was not a popular choice with all and only four took to the track but never the less it was high on entertainment with 77 ‘Dumbo’ and 267 ‘Rollo’ impressively beating the World Champion and Sutcliffe on their way to the win.

The entry of Bangers was a huge disappointment, and sad to say the smallest entry in living memory at Mendips with just 11 cars present.  Suffice to say this will give food for thought for future fixture planning, especially with regard to 2014 but in a classic case of there not needing to be a big entry of cars to entertain, those who were present put on a fine show.  The first race featured plenty of spinning and it was 54 Tom Davey who came through to win.  In the second heat there was a stoppage when Davey delivered a huge hit on 242 John Quinn which left him shaken.  Davey then went on to win and followed it up with another in the Final to complete his hat-trick of wins.  162 Mike Cocks was second and 111 Tom Ruby took his first trophy in third and then to round out a good day for him he outlasted them all in what was a very entertaining DD.