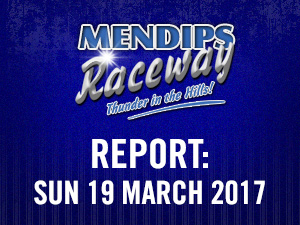 The 19th March 2017 meeting started off overcast with a few spots of drizzle in the air until the 6th race- the 1st Banger Heat when it started to rain and the wind picked up and the rain got heavier as the meeting went on making some tricky driving conditions.

80 Bangers turned up for the Micro Massacre! National Bangers under 1400cc. There was a good mix of cars with a lot of Nissan Micras and Ford Kas, with some Fiestas, Peugeot 205s, Honda Civics, and a Austin Metro. The Top Tin Awards went to 862 Darryl Cocks, 921 Welsh Wizard, and 956 Harry Thompson.

There were three action packed Heats which included a complete rollover for 17 Aaron Charles, and he carried on, and 185 Paul Rapps was on the receiving end of a massive T-Bone, on the passenger side requiring assistance but he was ok. There was only 7 finishers in the 1st Heat which was won by 333 Stephen Randel, and 7 Jamie Charles took the Entertainer Award. Only 5 Cars made it to the finish in the 2nd Heat which was won by 81 Rick Bugler, and in the 3rd Heat 54 Tom Davey took the win from 440 Macauley Mills the only finishers!!

36 Cars came out for the Consolation which was won by 720 Kenny Jo Gabriel, from 98 Aaron Evans the only finishers!! Only 16 cars Qualified for the Final which was won by 17 Aaron Charles, from 54 Tom Davey, then 252 Boogie. This led to a destruction derby, where another five cars joined the grid, and after a short sharp affair with some great hits, it ended with the Bugle family creating their own jacking train, with Roona last man in for the win!

There were 22 cars turned up for the Junior Rods, which was running a 2/3rds format, with a lot of close racing, and overtaking. In the 1st Heat 35 Charlie Johns quickly got from the Blue grade to take the lead with 88 Charlie Pearce, 285 Jacob Anderson, and 36 Josh Weare quickly up from the Red Grade to take 2nd, 3rd, and 4th, with about  a lap to go after hanging on to the lead under extreme pressure for most of the race, Johns spun out  of the lead giving C .Pearce the lead and the win from, Anderson, then Weare. In the 2nd Heat 34 Cameron Mc Colm quickly got into the lead from the Blue Grade, with 190 Ewan Gumbleton, and 376 Daniel Kent quickly up to 2nd and 3rd from the back of the grid, Gumbleton took the outside line and Kent got up his inside as Mc Colm was doing a good defensive drive with Gumbleton and Kent side-by-side, on the last lap Gumbleton managed to get on the outside of Mc Colm, and Gumbleton just piped Mc Colm to the post!!

The rain was starting to get heavier for 3rd Heat again Mc Colm quickly took the lead from the Blue’s, Gumbleton, and Anderson quickly up to 2nd and 3rd from the reds. Further back there was a few incidents!! Mc Colm left the door open on the pit bend and Gumbleton got up his inside and they both got very side-ways doing some synchronised drifting and managed to collect it up and Gumbleton took the lead then went on to win from Mc Colm, then Anderson.

In the Junior Rod Final Mc Colm was not to be headed, and drove well in very difficult conditions.

There was a good showing of 10 Hot Rods with plenty of overtaking with all the driver’s putting on a good show, 718 completed a hatrick  of victory’s with the first two victories from the middle of the grid, with the rain very heavy for the 2nd Heat and the Final.

The Heritage Stock Cars were contesting the inaugural running of the Pete Welland Memorial Trophy, and a good field of 16 cars took to the track for the first race, which was the trophy event, after the presentation of commemorative awards to all drivers. Mark Loader (444) led them away in his debut in the formula, but by halfway Darren Clarke (616) had caught him, but Banbury’s Phil Smith(762) took over with 5 to go and went on to the win. Two more races followed-the first won by Jack Bunter (128) having a day off Clerk of the Course duties, after his only challenger Smith had to pull out with a broken gearbox, and the last race of the day run in wet conditions was won by Manchester’s Nigel Finnegan (59) whose expertise in the wet paid off with a clear victory.

Some great racing on a day when many drivers would have given up.