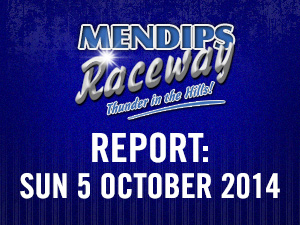 We reached the last meeting of season 2014 at Mendips Raceway and were greeted with a dry and mainly bright Autumn day and a busy pit area with the BriSCA F2 Stock Cars joined by a West of England Championship double header for the Rookie Bangers and Special Rods. A lot of cars naturally added up to a lot of races, and with those races came a lot of action and with it plenty of controversy too.

The BriSCA F2 part of the season had appeared a little disjointed this year, as this was the first appearance for them since the end of July meeting. The headline event was the Benevolent Fund trophy, which is a magnificent Rosebowl raced for each year to give recognition to the Fund, which gives monetary support to drivers who are injured on track related incident and unable to work as a consequence.

It is aimed at getting as many of the top graded drivers together at once and whilst that didn’t happen (and hasn’t really happened for this event, alas for almost 20 years) there was a decent entry of 36 cars present and it did include the recently crowned World Champion 1 George MacMillan and National Points and multi champion 7 Gordon Moodie both all the way from Scotland, whilst 823 Sam Wagner also put in a great travelling effort from the North East of England.

First up, was the 2014 ‘Rookies Reward’ Final for the qualified white and yellow grade drivers and it actually saw a first win for 745 Lee Morgan with 526 Marc Rowe second and 328 Andy Walker third. This was a ‘stand-alone’ race, with the ‘Ben Fund’ trophy doubling up as heat one. The grid was formed in reverse national points order to the highest graded drivers on the day as per the rule book.

The first attempt at running the race saw a big coming together in the mid-pack which resulted in a pile up on the home straight and as the race had not completed a full lap, a red flag and complete re-start was ordered.

There were five cars unable to take the second start which soon saw 83 Sy Harraway move through into the lead but all eyes were on the progress of Moodie, MacMillan as well as 676 Neil Hooper and 886 Chris Bradbury. They caught and disposed of Harraway on the bottom bend and their battle became that of the lead. It was ferocious stuff with the places swapping and changing on each corner and bit hits going in. However, when Bradbury and Moodie ended up accounting for each other it was down to the other pair, and MacMillan was able to open out a gap on Hooper to the flag and thus add another impressive trophy. 126 Jamie Avery was third.

The second heat was for the cars not in the Ben Fund and 437 Danny Withers took the win whilst Bradbury took the consolation. The Final was headed off by 745 Morgan as further back the battle of the big four resumed again, this was until there was a yellow flag with Harraway stranded on the back straight. The re-start didn’t go very far as the bumpers went charging in and 828 Julian Coombes was sent hurtling into the plating.

At the next resumption, Moodie and Bradbury hit the front with 315 Justin Fisher joining their battle. The hits between both 7 and 886 got bigger with each lap in a clear battle for supremacy until a particularly large hit from Bradbury on Moodie saw him collect Fisher and both cannoned into the plating. This brought about another yellow flag and at this point the Steward decreed that 886’s hit had crossed the line to what is permissible under the rules and he was disqualified. All of this left Hooper in the lead for the re-start and he went on to win ahead of MacMillan and 189 Paul Butcher. 437 Withers took his second win of the day in the Grand National.

The Special Rods not only had their West of England Championship to race for, but also the point’s championship decider. The format was the usual two from three heats, but the points scored would determine the line-up for the Final. 720 Dan Latimer held off 85 Andy Pincott to win heat one and then in heat two 51 Rob Price held off Latimer to take the victory, thus the latter booked himself a grid position towards the front regardless of what happened in heat three. In that race 192 Ashley Raymond was the leader until he was disqualified for ignoring the blue flag. This freed up 730 Scott Sealey to take up the running, but he then lost out to the two battling it out for the points in 47 Richard Howard and 18 Russ Colenut and it was Howard who took the win.

It was Latimer and Pincott on the front row of the WOE with Howard and Price on row two, 304 Tim Weare and Colenut on row three. Pincott quickly turned his front row start into a good lead whilst second was a battle between Latimer and Howard. This was to end in tears though, as a clash between the two on the exit of turn four and home straight saw 720 receive a broken front suspension and Howard receive a black cross from the Steward for his part.

Pincott was clear, but his lead was eroded when a four car crash on turns three and four brought out the yellow flags on lap 12. However, once again at the resumption Pincott was able to maintain the gap to Howard and go on to take the flag and title. Howard was docked two places by the Steward for his part in the Latimer incident and this promoted Weare to second and Colenut to third. Howard, however did have the consolation of winning the overall 2014 points and the right to wear the silver roof for next season, as another good year was rounded out for the trusty Sierras.

Whilst there are maybe some who do not like the fact that the West of England Championship is no longer for Unlimited National Bangers, the fact that there were 53 (Rookie) Bangers in the pits for this simply speaks for itself. However, all meeting long there was simply too much ‘action’ for what is permissible in what is a nudge and spin Banger formulae. Whilst this is good to watch on what is still a fun formulae, it is not the ethos and feuds and vendettas can be sorted out in the ‘full blood’ Bangers at any time…

The two heats went the way of 13 Chris Jeanes and 54 Tom Davey whilst the consolation saw the win declared to 816 Martin Gill, after the race had to be abandoned with the bottom bend blocked and too many turning to what appeared to be ‘wrecking tactics’ in the midst of it.

The WOE Final was more of a straight forward race, but still had its moments including one from 41 Sam Hollins who met 83 Ben Styles with a head on. 999 John Glover was the long-time leader until he lost time which allowed 881 Gary Emery to take over and he went on to win. Glover was placed second on a re-check of the charts and 70 Jamie Thomas was third. Despite recording a nil score on the day, so did several others and as a consequence 109 Chris Neville took the points championship for the second year in a row.