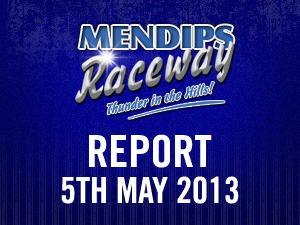 On a very warm sunny and dry afternoon with an 11 race programme completed by 16.45pm, it was the Bangers THUNDERBOLT X111 and Special Rods and Hot Rods.

Although only 34 Bangers turned up they did manage to put on a good show with half the cars racing in each heat.

In the first heat 278 Shaun Brokenshire took the early lead, and 270 Slug jacked up 920 Simon Sparrow then was followed in by 303 Jason Oliver. Then on the back straight 34 Terry Phillips jacked up Trim and was followed in by 190 Steve Bailey, Bailey backed out and carried on his way. As Phillips was pushing Trim round onto the home straight, 162 Mike Cocks decided to pile in making another 3 car train. Bailey spun Sparrow out. Bailey took the win from Bevan, then 747 Liam Martin, then, Sparrow the only finishers!!

In the second heat Claxton stalled on the rolling lap and the pace car had to stop catching quite a few drivers out!! When the race did start a few cars went out on the first bend and 128 Mark Atkins took the early lead, before 382 Jack Foster Jnr got past. There was a red flag for a trapped driver (who was ok). Foster led the re-start from Atkins then 241 Liam Cracknell, then Cracknell managed to get into the lead, and Cracknell and 313 Tom Cattell and was swapping places and hits before Cracknell managed to get the better of them. Houghton jacked up Charles, and 239 Steve Carter spun 27 Dean Quinn. Cracknell took the win from Atkins then Carter.

There were 21 cars that made it out for the final with the non-qualifiers starting half a lap down. Trim was jacked up by Houghton then was followed in by 341 Andrew Jones making a 3 car train!! 40 Pete Stanley was dishing it out and managed to spin 2 cars in different directions down the back straight before jacking up Trim. Trim was giving and receiving a lot of attention!! And Sparrow was in the thick of the action! Jones and 714 Paul Smaldon jacking up Trim on more than one occasion!! Foster went on to take the win from Bailey then Bevan.

8 cars made it out for the All-comers race with Bailey spinning out Martin. Foster took the win from Bailey.

The Special Rods were again providing a lot of close and exciting racing. There were 15 cars out for the 1st Special Rod heat. 175 Kev Scammell out dragged 386 Adam Ghey from pole and 4 Brian Roper and 273 Tom Cambridge quickly got up to 2nd and 3rd, from 4th and 6th on the grid. Scammell then built up a big lead until he caught up with the back markers. 41 D.Howard, 210 P.Barnes, 700 Les Brice, 18 R.Colenutt and 23 Stuckey were making good progress from the back and there was a lot of swapping places as they was going through the back markers in the battle for the lead. Cambridge went on to take the win with Scammell taking second from Stuckey coming home in 3rd from Colenutt in a very close finish.

There were 15 cars out for the second heat - 3 Simon Harraway shot straight into the lead from pole from 5 Alan Lettley and 51 Rob Price. 47 Richard Howard was making good progress from the back, and 304 Tim Weare was going well from the reds, then Price had a half spin and got stranded sideways on the turnstile bend, and 173 Alan Cambridge spun trying to avoid him and was collected head on by 993 Darren Foss. Harraway went onto take the win with 122 Joe Rowe in 2nd from 8th on the grid then R.Howard from Lettley.

In the Consolation race there were 13 cars. 668 Rob Look out dragged Lettley for the lead and the two of them built up a gap from Ghey in 3rd, which remained the same until just before the half way mark when 136 Jason Horseman tried going round the outside of Ghey, and 120 Andy Latimer and Cambridge went for the inside line behind Ghey. After several laps Ghey went wide letting Latimer and Cambridge through and sending Horseman very wide!! Cambridge then found a way past Latimer for 3rd. R.Look went on to take the win from Price then Cambridge.

There were 20 cars out for the final. Scammell shot straight into the lead from pole with Lettley and Harraway quickly up to 2nd and 3rd from 4th and 5th on the grid and they built up a bit of a lead. Harraway found a way past Lettley then Scammell and built up a bit of a gap further back.  J.Rowe, Weare and Barnes were carving their way through the pack, with Colenutt, R.Howard and Stuckey also going well until, 26 Andy Bennett got spun outwards facing the wrong way but managed to get his car onto the in-field, then Colenutt got spat out of the pack into the wall! J.Rowe nearly got past Scammell on the outside then they just touched sending J.Rowe into the wall broadside causing a big pile up!! 11 cars made the re-start with the back of Weare's car stoved in!! Harraway led the re-start from Weare then Lettley, Brice, Stuckey, then R.Howard. Harraway went on to take the win and R.Howard managed to work his way up to 2nd mostly on the outside, with Weare in 3rd.

There were 9 Hot Rods racing again giving some close racing. In the first heat 780 Mike Loosemore eventually managed to find a gap on the inside of 18 Larry Langmead for the lead with 117 Mike Tossell in 3rd, and the 3 of them built up a lead. Further back just before the half way mark 282 Steve Hunt eventually found a way past 55 Alistair Rowe for 4th place. Then Hunt had to set about reeling in Tossell. Then there was a big battle for 5th place which 258 James Griggs managed to get the better of. With 3 laps to go Hunt managed to catch Tossell but couldn't find a way past. Loosemore took the win from Langmead then Tossell.

In the Second Heat 205 Mike Norton lead from 3 Simon Harraway and built up a gap from Griggs. Loosemore was making good progress from 8th on the grid, and Hunt found a way past 39 Craig Harris then Griggs for 3rd and set about reeling in the leaders. Then as Loosemore was going round the outside of Harris, Loosemore accidently clipped Harris forcing Harris to retire. The first 3 crossed the line nose to tail with Norton taking the win from Harraway then Hunt. Loosemore crossed the line in 4th but was docked 2 places for contact.

In the Final Langmead lead from pole from Hunt, Norton, then Harraway and the four of them built up a big lead all racing nose to tail. Just before the half way mark Langmeead went wide letting Hunt, Norton and Harraway through. Further back Loosemore had worked his way up from last on the grid to 6th using the outside line, behind Tossell. Loosemore spent a while on the outside of Toseell before he managed to get passed for 5th. By this time the lead four was too far ahead to catch. Hunt went on to win from Norton, then Harraway, then Langmead.