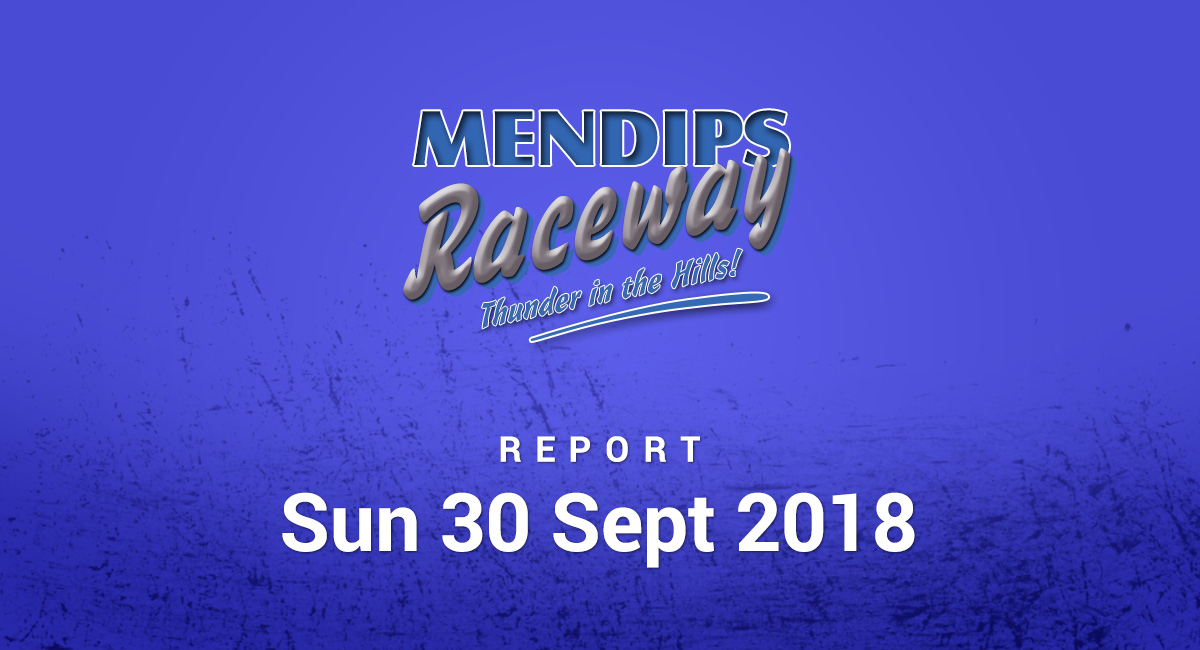 It was a mostly overcast day with some drizzle and some sunshine leaving some very changeable track conditions.

Amongst the long distance travellers in the F2s were 7 Gordon Moodie, and 647 Chris Burgoyne from Scotland, and in the Saloon Stock Cars was 661 Graeme Shevill Jnr, and 620 Aaryn Triggs, from Scotland, 470 David Vaughan from Yorkshire, and 56 George Bolt Jnr. 399 Cole Atkins, and 428 Lee Sampson, and 730 Deane Mayes from East Anglia.

36 F2s turned up for the National Series Round 4, With ½ the cars in each Heat. The 1st race was the Whites and Yellow’s race in which 16 drivers took part, 91 Harrison Bryant and 517 Harley Cornock led them away and they swapped places a couple of times until Bryant got the better of them, further back there was a couple of skirmishes and 976 Dan Kent was doing well until he got took out. Bryant went on to take the win from, 660 Becky Pearce, then 438 Mike Rice. In the 1st Heat Cornock took the early lead from pole before 398 Ian England relieved him of the lead, further back 12 Daniel Ford had to retire with damage, and Burgoyne had to retire with a gearbox problem, and there was a stoppage as 852 Adam Blacklock and 282 Anthony Riley had a coming together, England led the re-start, from 667 Tommy Farrell, Rice, 328 Andy Walker, then 935 Nathan Maidment, and Maidment went from 5th to 3rd, and Farrell knocked England wide and Maidment nipped up the inside of both of them to take the lead, and with 5 laps left 7 Gordon Moodie got up to 2nd (from last on the grid) right behind Maidment, then with 3 to go Maidment went wide and Moodie didn’t need a 2nd invite to take the lead then on to win, from Maidment, 542 S.Gilbert, then Farrell. In the 2nd Heat Bryant hit Pearce wide to take the early lead and Bryant built a big lead, and 890 Paul Rice was quick up to 3rd, then P.Rice punted Pearce wide to take 2nd, further back 560 Luke Wrench got spat out the pack, then Bryant ended up in the wall which required a stoppage. 828 Julian Coombes led the re-start, from 127 Matt Stoneman, then 24 Jon Palmer, then 101 Kelvyn Marshall. Then Marshall punted Palmer wide for 2nd, and 127 Matt Stoneman punted Coombes wide to take the lead then on to win from, Marshall, then 527 James Riggall. 12 Car’s made it out for the Consolation Race including Burgoyne who had fixed his car, Cornock took the early lead from pole, from 762 Mike Cocks, then Bryant retired, and M.Rice made it up to 2nd, from 8th on the grid, and Cornock went wide and M.Rice didn’t need a 2nd invite to take the lead, then with 4 to go Burgoyne made it up to 2nd and punted M.Rice wide to take the lead then on to win from, M.Rice, then 895 Ben Goddard. 26 Car’s Qualified for the Final England led from pole then P.Rice took over the lead and P.Rice built up a big lead, then 618 Ben lockwood got spun out, and later Kent got turned around, Moodie got up to 3rd with Burgoyne on his tail, then Moodie shoved Palmer wide to take 2nd then had to set about reeling in P.Rice, Maidment was going well until Palmer took him out, and Palmer was dishing it out, then Palmer and Stoneman had a coming together! On the last lap Moodie nearly caught P.Rice but was not able to mount a challenge, so P.Rice took the win from Moodie, then Burgoyne. 23 cars came out for the Grand National the 1st start was aborted as the Blue and Red Grader’s Jumped the start and the 2nd start was a bit messy but passable! Cornock took the early lead from pole until England caught and passed him, then Farrell got up to 2nd and shoved England wide to take the lead, then Riggall got past Farrell to take the lead and Riggall built a big gap up to 2nd, then Gilbert got up to 2nd, and Moodie managed to get up to 3rd, then Gilbert went wide and Moodie didn’t need a 2nd invite to take 2nd, but Riggall was too far ahead to catch so Riggall took the win, from Moodie, then Gilbert.

18 Saloon Stock Cars turned up. 902 Bradley Compton -Sage got past 130 Chris Durrant to take the early lead, then amongst the action there was a big pie up on the turnstile bend, and 602 Ashton ‘Geronimo’ Armstrong lost a wheel, and Durrant was getting a lot of attention! On the last lap 27 Kieran Bradford got up to 2nd and Bradford shoved Sage to take the lead then on to win from Sage, then 399 Cole Atkins, then Shevill. In the 2nd Heat Durrant was going a bit quicker and led for a couple of laps until 248 Will Makins bundled him wide for the lead, then Bolt spun Makins out to take the lead, then Vaughan shoved Bolt wide to take the lead, then Bolt then spun Vaughan out into the inner marker tyre to re-take the lead! Further back Triggs made the break whilst the rest of the Red and Star Grader’s was busy knocking 10 bells out of each other, and Armstrong had a big argument with the wall with a bit of help! Then Triggs bundled past Bolt to take the lead then on to win from, 476 Ryan Wadling, then Bolt. 14 cars made it out for the Final Vaughan took the early lead from pole and built up a big lead, and 730 Deane Mayes, and 720 Shane Brown both put 2 cars wide with one hit to pass on their way to the front, and Bolt and Wadling was having fun and games, and with 5 to go Brown caught Vaughan and Brown nipped up the inside of Vaughan for the lead then with 3 to go, Brown, and Vaughan got very side ways and Mayes nipped past to take the lead then on to win from, Brown, then Atkins, then Shevill.

50 Back to Basics Bangers turned up which were split in two Heats. There was a good mix of cars including Vauxhall Astras, and Cavaliers, and Ford Fiestas and MK3 Escorts. Nissans and Toyotas and 3 x People Carriers, and Harry Thompson had a smart VW Golf and Mike Parry had a Citroen CX. In the 1st Heat amongst the action 23 Clive Crockford nearly rolled and parked on 894 Chris Stokes bonnet, and 129 Lee Dalton took the lead from 3rd on the grid and one of the backmarkers had a few attempts to try and take him out but couldn’t make it stick! Dalton went on to take the win from 7 Jamie Charles. In the 2nd Heat there were a few knocks and spins and there was a stoppage for a car stranded on the pit bend, 701 Ben Brice led the re-start, and amongst the action 956 Harry Thompson managed to take the lead then on to win from B.Brice, then 440 Macualey Mills. 26 bangers came out for a very lively Consolation Race with a lot of action on the pit bend and a small pile up on the turnstile bend and there was a stoppage, thankfully the driver just seemed badly winded, 455 Shane Kennard led the re-start from 700 Les Brice. Kennard ended up in the fence and 33 Shaun Norton shoved L.Brice wide for the lead with 5 to go L.Brice gave Norton a wake up call and on the start of the last lap Norton passed a backmarker and L.Brice took a lunge going into the last corner and there was a drag race to the line with the backmarker in the middle, and L.Brice just pipped Norton to the post. 27 Bangers came out for a lively Final 53 James Clarke was spun out and got collected head on by Stokes, and 122 Jimmy McDermott was spun out and was collected head on triggering a chain reaction, with a lot of action on the turnstile bend, then there was a stoppage and only 9 cars made the re-start, led by Dalton, and only 6 cars made the finish with 775 Brad Hunt taking the win from 211 Adrian Coles, then Dalton. About 20 car came out for a very lively D/D amongst the action, 111 Rhys lansdown and 154 Joe Odhams had a head on and 309 Chris Parry jacked up 154 Joe Odhams, then 386 Bobby Stilgoe hit C.Parry head on and 23 Clive Crockford jacked up C.Parry, then 27 Dean Quinn gave Odhams a head on and Odhams car caught fire, meanwhile 328 Mike Parry got his paper out to read whilst stranded!! D.Quinn then gave 242 John Quinn a head on and J.Quinn’s car had a small fire which was also quickly extinguished, D.Quinn and J.Quinn was the last two cars left and after a lot of hit’s between the two of them, and J.Quinn’s car was the only car running then J.Quinn went on a wrecking spree hitting a lot of the dead cars!!