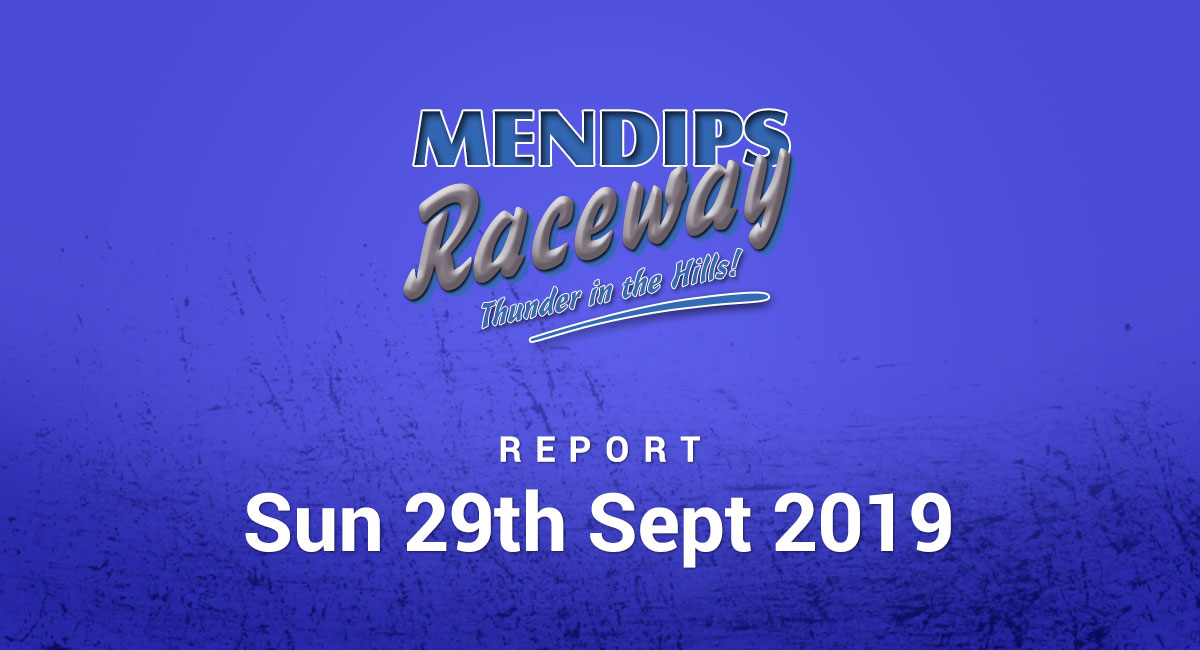 After the heavy rain overnight, and most of the morning right up to start time the track was very wet!! The rain eased off during the 1st part of the meeting and remained dry, and the track was drying out and the pace was getting faster, as the meeting was going on. In the F2’s and Saloon Stock Cars there was quite a few drivers who travelled a long distance.

26 F2’s turned up and there was no White Tops present. 6 Cars came out for the White’s and Yellow’s Race 979 Paul Moss led from pole and built up a big lead by keeping close to the fence all the way round, 828 Julian Coombes made it up from last to 2nd and tangled with 287 Luke Beeson, and Coombes dropped back, and 517 Harley Cornock spun across the finish line, and Moss won by ½ a lap from Beeson, and Coombes made it back up to 3rd.

In the 2nd Heat 979 Paul Moss took the early lead, and Cornock had a spin and further back 24 Jon Palmer and 101 Kelvyn Marshall were having a good scrap and trading places!! Which Marshall eventually got the better of!! With 4 to go 542 Steven Gilbert got up to 2nd and set about reeling in Moss and Gilbert caught Moss and on the last corner Gilbert shoved Moss wide and Gilbert won the drag race to the line, with 788 Steve Mallinson coming home 3rd, from 183 Charlie Guinchard.

6 Cars came out for the Consolation Race Kent led from pole and with 6 laps left 905 Rob Mitchell found a way past Kent to take the lead then on to win, with 127 Matt Stoneman coming home 2nd, from 618 Ben Lockwood.

22 Cars Came out for the Final at the back they was a big battle amongst the Star Graders and Mallinson was going well until he had to retire with a broken wheel guard, Mitchell, 126 Jamie Avery, and Lockwood all had spins, and 801 Jack Cave also retired, and just before ½ way Gilbert (from 9th on the grid) took up the lead and went on to win from, 895 Ben Goddard, then Marshall (from 14th on the grid), then Guinchard (from 12th on the grid). Gilbert Celebrated with Doughnut’s and Wrench was declared Track Champion and he also celebrated with Doughnuts.

20 Cars came out for the Grand National and within the 1st few laps there was a tangle on the pit bend and Marshall went on his side and tipped back on to his wheels. Goddard led the re-start, from Avery, then Beeson, Palmer fired Mallinson wide, and Wrench fired 968 Micky Brennan wide, and Stoneman made it up to 3rd from 12th on the grid, then Stoneman put Avery wide for 2nd . Goddard went on to win from Stoneman, then Avery, and Gilbert made it up to 8th from his lap handicap.

18 Saloon Stock Cars turned up. In the 1st Heat 23 Max Gunter led for a while from pole, and amongst the skirmishes 318 Rob Speak, and 800 Scott Greenslade got spun out, and 210 Paul Barnes ended up facing the wrong way on the pit bend, and 907 Stuart Garland was introduced to the wall on the turnstile bend!! 610 Trent Athurton made up from 4th to relieve Gunter of the lead, and Athurton went onto win from 149 Jamie Sampson (from 14th on the grid), from 399 Cole Atkins (from 15th on the grid).
In the 2nd Heat Gunter took the early lead and Athurton made it up from 6th on the grid to relive Gunter of the lead, and amongst the skirmishes, 130 Chris Durrant, 341 Austen Freestone, and Garland got spun out, and 5 Tam Rutterford, 84 Carl Boswell, and Sampson had to retire, Athurton went on to take the win from 902 Bradley Compton-Sage, then Gunter.

In the Final there was a lot of hard hits going in, and Athurton got fired into the wall at the start of the race, and 561 Aaron Totham got turned into the fence on the home straight, and Gunter led from pole and just before ½ way Sampson relived Gunter of the lead, Sampson went onto take the win from Freestone, Gunter, then Atkins, then 171 Adam O’Dell (from last on the grid).

Amongst the skirmishes in the 1st Heat 3 35 Albert Hughes got put on his side and tipped back onto his wheels!! 129 Lee Dalton went onto take the win, from 881 Gary Emery, then 113 Chris Jeanes.

In the 2nd Heat 799 Tom Pearce shoved 126 Darren Willis into the wall, and 26 Russell Gillingham jacked up Pearce, 701 Ben Brice survived the knocks and spins to take the win.

20 cars came out for the Final/Allcomers, 6 Danny Greening, 618 Ben Lockwood, and 298 Dave Greening, had spins, and 11 Jake Devine spun and M.Dalton T-Boned Devine, L.Dalton went on to take the win.

8 cars stayed out for the D/D 11 Devine was getting a lot of attention, 44 Jordon O. Jacked up Jeanes, and 743 Jake Bond Jacked up 23 Clive Crockford, then Jeanes Jacked up Crockford, and Jeanes was the last car running!!