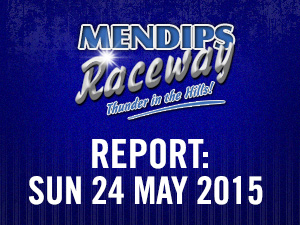 The first of the two meetings over the Bank Holiday weekend saw the weather forecast prove to be inaccurate, the rain mainly stayed away and the good sized crowd on hand were treated to a day of plenty of entertainment from the National Bangers, BriSCA F2 Stock Cars and Reliant Robins.

For the National Bangers it was one of the biggest meetings of the season with the 2 litre English Championship up for grabs, and whilst the overall entry did fall short of what was hoped it was certainly one of quality and included a six strong invasion of the “Gladiators” team from East Anglia, and their presence was to be a great overall boost to the afternoon in the Bangers. The decision was made to run the main event as the first race, but to make it fair for those drivers who were seeded in, they were placed on one grid and the other driver’s gridded further back. The seeded drivers drew for their grid position and whilst 129 Lee Dalton drew grid one, defending title holder 382 Jack Foster drew grid two with 162 Brett Ellacott on the second row.

It was Foster who shot into the early lead with Ellacott moving into second and 262 Rob Buglar third. However a red flag with 206 Phil Milner broadside across the track closed all the gaps up. This was only on the fourth lap of 20 and 382 ran wide at the re-start and this allowed Ellacott to open up a margin. However, he was spun by the now back-marking Buglar and this allowed Foster to regain the lead whilst his younger brother 82 Tom Foster accounted for 190 Steve Bailey with a big hit in a pile up on the top end. This was a carry-over from the 2 litre World Championship race at Hednesford the previous week, and almost naturally Bailey sought revenge on both of the Foster’s. However, he blotted his copybook as he twice attempted to attack the leading 382 car off of the centre, which is a contravention of the rules. He did connect with the side of Foster’s car, but did not stop him but in all his he earned himself a disqualification from the rest of the days meeting. 717 Jack Tuffin did close on Foster, but got caught up with Bailey’s antics too and this allowed 382 to make a successful defence of his title. 570 Jordan Cumming was second and 549 Phil Smith made third, having not been a seeded entrant.

The Gladiators played a large part in the first Allcomers, especially 206 ‘Turkish’ Milner who did the reversing into the traffic trick, which accounted for several leaders including Ellacott, Tuffin and both Foster’s! All of which allowed Gladiator 403 Marcus Sprawling to take the win. There were fewer cars for the second Allcomers which was won by 262 Buglar.

The eight car destruction derby rounded out the day, five of which were Gladiators thus somewhat inevitable that one of them would wind up the last car. The other three – 11 Matt Parsons, 205 Alex Ganter and 262 Roona did give it a good go but ultimately it was 349 Lewis ‘Noddy’ Price who was the last car moving. As we say, the meeting was certainly enhanced by the welcome visit from the Gladiators.

With the clashing meeting at St Day, numbers were never going to be spectacular for the F2 Stock Cars, but the 20 car total was steady enough and actually more than the corresponding date had in 2014. 828 Julian Coombes won the second round of the Rookies Reward to get things underway, just as he did at the previous meeting. The first heat was the only race all day to have any of the forecast drizzle and it made things slippery over the second half of the race, but helped form a great four way dice for the win which 783 James Rygor got the better of. 828 Coombes then took a flag to flag win in heat two, just holding off a fast finishing 522 Chris Mikulla. The Final was led until beyond halfway by 845 Andrew Morgan when Mikulla took over. However, very soon after he did the race was suspended with Coombes stranded in a dangerous position. This put Rygor right on his back bumper for the resumption. But, try as he did, 783 simply couldn’t dislodge the 522 car and Mikulla took the win, his first Final of the year (and will mean a return to his more accustomed star grade) 700 Adam Rubery rounded out the top three. Rygor took his second win of the afternoon in the Grand National.

It was ‘Crazy Day’ for the Reliant Robins – as if things are not already crazy enough – and featured a trio of ‘different’ races for them. The slalom race featured no less than five rollovers as they found the big marker tyres in the centre of the track for them to move around harder work than you would imagine.

On his first Robin outing in a few years, 58 Martin Dalton took the win. The figure of eight race went without inclident in the first half but when Dalton was struck and rolled on the crossover point, it triggered off a much more incident packed second half, where Dalton rolled again. 3 Dan Tythridge took a flag to flag win.

The last for them was a chained pair’s race and the duo of 58 Dalton and 304 Tim Weare, points champions past and present was a formidable one. The Torvill and Dean of Reliant Robin racing….. They won by quite a distance.