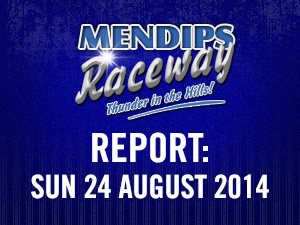 A good field of cars arrived for the first day of the two day Bank Holiday weekend, which featured Rookie bangers and Special Rods both days, and Junior Rods today. There were 55 Bangers ready for battle, with the added attraction of World Championship Qualifying points on offer to secure a place in the World Final Ipswich on November 29th Before racing started,Top Tin awards were made to Keiran Bellringer(900), Sam Hollins(41) and Brad Hunt(775). It was the only award that Points leader Hollins would get all weekend, as his car blew its engine early in the meeting.

Only 8 cars finished a busy first heat, with Jamie Thomas (70) coming out on top. Heat two was convincingly won by Ryan Sparks (246) with Silver roofed Chris Neville (109) opening his account with a third place.A hectic consolation was won by Gary Bowers(550), with the very rapid Honda of Sam Baker (929) in second place, setting out his stall for the Final. Baker then went on to win the Final, and the Allcomers very convincingly, with Ryan Sparks in the runners up spot both times. A 22 point score by Chris Neville put him in a good place for the World Qualifiers, which he subsequently followed up on the following day.

Once again the Juniors raced in the now popular two from three heat format, and with 22 cars on hand there were plenty for each race. Charlie Johns(35) was having his first outing, and Levi Thame(12) was returning after an early season crash, but it was Beck Pearce (66) who won the first two heats, followed home by Ben Brice (700) and Charlie Ayles (300) Ewan Gumbleton (190) led them home in heat three, with Henry Murray(784) finishing second from his now red roof start grade. Come the Final, though, it was Joe Capel (30) who made the running, after Pearce;s car suddenly lost power through a detached ignition lead and eliminated several cars who were unable to avoid her, but a very spirited charge from Ayles got him to within one metre of a victory as they crossed the line very close together. Great racing from the Juniors, and Ben Brice now leads the Points Championship going into their final meeting in September.

The first day of the two day Special Rod meeting, and the last two of the three meeting Summer Series, was raced in fine and dry weather. New to the formula was Scott Sealey (730) who has purchased the car formerly used by Pip Carter (521). Alan Lettley(5) who just managed to avoid upgrading before the meeting, made the most of his white grade start to win two heats convincingly, while blue graded Dan Latimer (720) took the other heat, helping him on the way to what would be the Summer Series win the following day. Come the Final, and Lettley was away again, and the fine train of stars and superstars made little progress, although it was interesting to note the Ross Stuckey(23) was at the head of the train. A great result for Andy Wadley(6) who finished second, with Andy Bennet(26) third. There was a bonus race in the form of a Grand National , and Alan Lettley proudly took his place one lap behind on the front of the grid, but such was the pace of the race that he failed to penetrate the top ten. The race was won by Latimer, with Mark Johns (35) second, and Bennett third.

This is the complete points table, but only drivers registered to Mendips Raceway are eligible for the World Final.