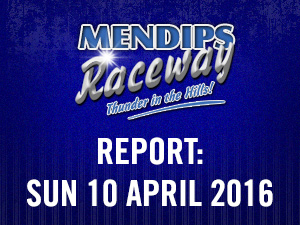 The weather was dry with a very cold wind, and the rain held off until just after Heritage Stock Car Final, with just two races left to run.

71 Bangers turned up for the Micro Massacre! 707 Aaron Charles, 270 Slug, and 710 Nipper Gould won the Top Tin Awards. Most of the drivers had Nissan Micras or Ford Kas, with a few Fiestas, and 501 Sam May had a Nova, and 7 James Charles had a Fiesta, 311 Danny Allen and 878 Joe Prior had Suzuki Wagon Rs

At the start of the 1st Heat 129 Lee Dalton got put on his roof just before the start line, so the race needed a complete re-start, 311 Danny Allen was at the head of a three car train going into the wall, and amongst the action there was a 8 car pile up on the pit bend and there was a lot of big hits going in and 117 Darren Sutton had a big argument with the marker tyre!! Only 7 cars completed the distance!! 707 Aaron Charles went on to win from, 190 Dominic Gumbleton, then 270 Slug.

The 2nd Heat started a bit quiet but then livened up with a lot of crashes and spins 7 James Charles, and 921 Kairan Wilson were both in the thick of the action both giving and on the receiving end, and amongst the action J.Charles Jacked up 775 Brad Hunt, then Wilson went steaming in!! 404 Macauley Mills went on to win from, 304 Tim Weare, then 27 Dean Quinn.

In the 3rd Heat there was a 5 car pile up on the pit bend, and again amongst the action there was a lot of big hits going in mostly on the turnstyle bend, and 266 Micky Ford got put in the wall big time!! Then there was a red flag to attend to Whittington who was ok. 363 Sam Trim led the re-start, from 81 Pops Bugler, 242 then John Quinn, and that is how they stayed to the line, with only 7 drivers completing the distance!!

About 32 cars came out for the Consolation Race amongst the action J.Charles jacked up 57 Christian Mansbidge, and 710 Nipper Gould went steaming in! Again most of the big hits mostly on the turnstyle bend and there was a track blockage so there had to be a re-start. Only 16 cars made the re-start which was led by 189 Jamie Knox. Amongst the action 5 Spike was dishing it out, and there was a 5 car pile up on the home straight, and Ford got jacked up. Spike went on to win from 330 Ben Key, then Knox, then 206 Matt Kelly the only finishers!!

The Allcomers Race into a D/D was run in heavy rain with over 30 cars in the race and about another 17 cars on the infield waiting for the D/D. There was a lot of action in the race and a lot of big hits going in and there was a massive pile up on the turnstyle bend and 262 Roona, then Allen went steaming in and with the track blocked, and no one moving, the race was declared, with 54 Tom Davey taking the win.  At the end of a lively D/D Mills and Quinn had a head on, killing Mill’s car, then Quinn and Trim had head on and Roona went steaming in, which killed Roona’s car, then Quinn and Trim had a few more head ons and one car caught fire and Trim was declared the winner

In the Junior Rods there was again a lot of competitive racing with a lot of overtaking. There was racing a 2/3rds format with an all in Final. There were 15 cars out for the 1st Heat 70 Amie Trott out dragged pole sitter 10 Kaitlin Kelly for the early lead from 75 Jack Buckingham (from 6th on the grid). 36 Josh Weare was quick up to 3rd (from 10th on the grid and found a way past Buckingham then Trott for the lead. 66 Becky Pearce and 285 Jacob Anderson was going well from the Red Grade and went 3 abreast with Buckingham in the middle when challenging for 3rd, and 376 Daniel Kent wasn’t far behind even going on the outside going 3 abreast at one point!

With 5 laps to go Weare went wide when passing the backmarkers and B.Pearce didn’t need a 2nd invite to nip up the inside to take the lead with with Anderson and Kent closley behind. B.Pearce went on to win from Anderson, then Kent, then Weare.

15 cars also came out for the 2nd Heat 28 Ava Hawkins out dragged pole sitter Kelly for the early lead from 101 Jack Mintram, Weare was quick up to 3rd (from 11th on the grid) then Weare went round the outside of Mintram, then Hawkins for the lead, then 21 Kyan Passco  and 77 Jacob Filer had a coming together and Filer was Black flagged for having too much damage to his car. The race was red flagged to clear up debris, Weare led the re-start from 29 Jasmine Mc Ardle then Kelly, then Anderson, then 88 Charlie Pearce. Anderson and C.Pearce went round the outside of Kelly, then Mc Ardle for 2nd and 3rd and C.Pearce clipped the fence causing him to retire, then Buckingham and Hawkins had a coming together 300 Charlie Ayles took quite a few laps to pass 108 Adam Headland  round the outside for 3rd place. Weare went on to win from Anderson(from 12th on the grid) then Ayles from last on the grid!!

13 cars came out for the 3rd Heat Trott out dragged pole sitter Mc Ardle for the early lead from Passco, then Filer. B.Pearce, Kent, and 190 Ewan Gumbleton was quickly up to 4th, 5th, and 6th from the Red Grade, then Mc Ardle broke down on the exit pit bend and Passco and Trott had a coming together. Passco led the re-start from Filer then B.Pearce. B.Pearce went round the outside of Filer followed by Kent and Gumbleton, then B.Peacre went round the outside of Passco to take the lead, closely followed by Kent, and Gumbleton accidently spun Passco out getting a Black cross, then Gumbleton went wide and Ayles didn’t need a 2nd invite to take 3rd!! B.Pearce went on to win from Kent, then Ayles.

20 cars came out for the Final.  The Red Top drivers were sometimes going three abreast when they were battling there through the pack. Mc Ardle out dragged pole-sitter Kelly for the early lead from Buckingham then Mintram, then Buckingham found a way past Mc Ardle for the lead, and Weare quickly got up from 10th on the grid to relieve Buckingham of the lead, then Passco got spat out of the pack and ended up facing the wrong way causing a stoppage. Weare led the re-start from Buckingham, then Mintram then Mc Ardle. C.Pearce then went round the outside of Mc Ardle closely followed by a few other cars, then when C.Pearce went round the outside of Mintram, Kent nipped through the middle to steal 3rd going 3 abreast!! Then C.Pearce lost a few places when he clipped 111 Millie Ruby. Then Kent and a few other found a way past Buckingham for 2nd. Weare went on to win with Kent crossing the line 2nd but was docked two places giving Anderson 2nd from B.Pearce.

7 cars came out for the 2nd Heat, on the clutch start Cole stalled and Shelper accidently jacked him up!! Shelper was given a bit of time to repair his car. Johnson led the re-start from P.Tossell, then White. White and Griggs went round the outside of P.Tossell for 2nd and 3rd. Then P.Tossell, Shelper, and D.Tossell had a coming together, then Johnson had a tanks slapper, and just missed White, and Griggs. White went on to win, from Griggs then Johnson the only finishers.

Only 5 cars made it out for the Final Griggs led from pole followed by White, then White found a way past Griggs for the lead, further back D.Tossell, and Shelper nipped up the inside of Johnson, then Shelper and Tossell had a coming together putting D.Tossell out of the race. White led the re-start from, Griggs, then Shelper, White and Griggs built up a gap from each other and Shelper, Within the last 5 laps White developed a misfire and Griggs reeled him in and passed him. Griggs went on to win from, White, then Johnson.

There were 12 cars out for the 1st Heritage Junior Stock Cars Heat, 342 Ross Taylor took the early lead from 253 Alan Humphrey and lea for a while and 59 Nigel Finnegan, and 616 Darren Clarke was making good progress from near the back, 314 Paul Bromham and 20 Dan Jeffries had a coming together, Humphrey had a tank slapper and lost a few places, and 559 Phil Hickerton put Clarke wide. Taylor went on to win from 763 Andy Bateman (from 11th on the Grid), then Hickerton(From 10th on the grid), then Clarke.

11 cars came out for the 2nd heat 357 Mark Johnson took the early lead from 536 John Ferguson and that is how they stayed for a while, then Ferguson found a way past Johnson for the lead, Taylor spun out, Clarke made it up from 8th to 3rd, and went round the outside of Johnson, then nipped up the inside of Ferguson to take the lead, then a whole group of cars crossed the finish line 2 and 3 abreast!! Clarke took the win from, 773 Nick Whitney (from last on the grid), then, Bateman(from 10th).

9 cars made it out for the Final Humphrey took the early lead from 218 Phil Mc Hiles, then Mc Hiles found a way past Humphrey for the lead, Whitney then had worked his way up from 8th to 2nd passed Mc Hiles for the lead. Whitney went on to win from Bateman, then Hickerton, then Clarke.