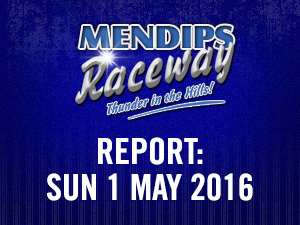 The weather was overcast and a bit windy with on and off light showers all afternoon.

There were 32 Bangers in the pits for the Old Skool Unlimited Bangers Thunderbolt XV1. There was a good mix of cars including 504 Andrew Worthington, 502 Kai May, and 172 Bernie Simon Byrne, in Toyota Previas, and 7 Jamie Charles, and 27 Dean Quinn in Ford Galaxies, some Volvo Estates, Granadas, BMW Saloons, and 232 Alan James in a BMW Estate, and 961 Brad Deeprose had a Lexus, and 731 Shaun Dyer had a Jag,  09 Mavis had a smart Triumph, and 246 Ryan Sparkes had a very smart BMW and 228 Matt Fall and 710 Ross Gould both had very smart Volvo Estates.

The Bangers were split into two Heats. In the 1st Heat 282 Steve Hunt did a double spin on his way to a flag to flag victory, spinning Byrne and Fall out at the same time!! After a quiet start there were a lot of knock and spins, and the drivers in the people carriers were getting stuck in!! Hunt went onto win from 246 Ryan Sparkes, then 247 Richard Sparkes. The 2nd Heat was a quieter race with only a few knocks, and spins, 262 Buddy James went onto win from 304 Tim Weare, then 278 Shaun Brokenshire. 9 cars made it out for the Consolation 787 Soft Lad spun Worthington, and Byrne spun 242 John Quinn out twice, then Byrne spun May and Brokenshire out on the same corner, and Fall got T-Boned by Lad. 24 Cars qualified for the Final 199 Tom Pearce was the first to be shown the plating! Then a big pile up started to emerge on the Turnstile Bend, and Worthington and Dyer went steaming in . There was only a gap near the fence about a cars width to pass then Dyer clipped Worthington head on leaving the rest of the cars nowhere else to go except straight in to the pile up!! With a blocked track the race was stopped, only 6 cars made the re-start led by 362 Johnnie James, then Ryan Sparkes, then 304 Tim Weare, B.James passed Weare, then B.James tried forcing Ryan Sparkes into a mistake, but couldn’t pass, J.James went onto win by the length of a straight from Ryan Sparkes, then B.James. 8 Cars came out for the Allcomers Race D.Quinn spun Weare out, and J.Quinn Jacked up Charles, 714 Paul Smaldon went onto win from J.James, then D.Quinn. D.Quinn was the only driver that was willing to take part in the D/D, so he drove around the track then jacked up the parked car of J.Quinn and was declared the winner!!!!!

Again in the Special Rods there was a lot of close racing with a lot of overtaking, they were running a 2/3rds format with an all in Final. There were 11 cars out for the 1st Heat 224 Jordan Edwards was in her 1st race since graduating from the Junior Rods, and she shot straight into the lead from pole from 556 Stuart Garland. 5 Alan lettley, and 51 Rob Price had a coming together, then and in the chaos Garland accidently T-boned the stranded car, and Edwards lost a lot of places, and the race was stopped. 364 Darren Feltham led the re-start, from 108 Steve Brown, then 47 Richard Howard, then 993 Darren Foss, R.Howard tried the outside of Brown but couldn’t make it stick, then Brown tried to go round the outside of Feltham but he couldn’t make it stick either, and R.Howard nipped up the inside of Brown, just as the red flags came out, for Price who had spun out. Feltham led the re-start, from Brown, then R.Howard, Brown went round the outside of Feltham, followed by R.Howard, Foss, then 85 Andy Pincott, then Pincott passed Foss on the inside, then went round the outside of R.Howard, then R.Howard spun out. Then on the last corner Pincott tried to go round the outside of Brown, and Foss nipped up his inside to steal 2nd place!! Brown took the win from, Foss, then Pincott. There were 12 cars in the 2nd Heat 29 Dave Dalton out-dragged pole sitter Feltham for the early lead with 35 Mark Johns going into 3rd place. 43 Andy Howard and 45 Tim Seaford went round the outside of, Johns, then, Feltham, then A.Howard tried to go round the outside Dalton and after a few laps side-by-side A.Howard managed to get passed Dalton take the lead, then there was a whole gaggle of cars behind Dalton in the fight for 2nd, and with a few laps left Weare managed to get into 3rd and tried going round the outside of Dalton and after a few laps side-by-side Weare hit the fence and bounced back and hit Pincott, and 426 Russell Colenutt, then Seaford accidently jacked Colenutt up!! The race was declared as A.Howard the winner, from Dalton, then, 136 Jason Horseman. 14 cars came out for the 3rd heat Edwards took the early lead from, Johns, then Dalton, Brown spun out, then Dalton passed Johns, then Edwards to take the lead, R.Howard and D.Latimer worked their way up, from the reds to take 2nd, and 3rd,  then R.Howard tried to go round the outside of Dalton, and, D.Latimer nipped up his inside to take 2nd, then D.Latimer went round the outside of Dalton and boxed him in with a backmarker to take the lead. D.Latimer took the win from, Weare, then 701 Ben Brice. 16 cars made it out for the Final Dalton found a way past Feltham, and Garland, for the early lead, then the was a pile up on the pit bend involving, Seaford, Garland, 41 Dene Howard, Foss and a few other cars, Dalton led the re-start, from Feltham then Horseman. Horseman, Weare, and D.Latimer then went round the outside of Feltham, Weare then went round the outside of Horseman for 2nd, and as D.Latimer tried going up the inside of Horseman, they had a coming together forcing them both to retire, then Weare managed to get round the outside of Dalton, for the lead closely followed by, Colenutt, then Pincott, Weare went onto win from Colenutt, then Pincott, then Dalton.

There were 9 Hot Rods out for the 1st Heat including 71 Frank Nohring from Germany in Colin White’s spare car. Nohring went straight round the outside of 49 Maurice Cole, then  took about a lap to pass 17 Paul Tossell on the outside, 718 Colin White had a couple of attempts to go round the outside of 258 James Griggs but couldn’t make it stick, so Griggs had a flag to flag victory, from White, then 788 Mark Shelper, with a gap to 4th place. In the 2nd Heat Cole led from pole, 205 Mike Norton, 536 Jeff Johnson, and 117 Dave Tossell nipped up the inside of 17 P.Tossell then they went round the outside of Cole for the 1st 3 places, about the ½ way mark, Johnson spun out of 2nd, and White had a few attempts to pass Shelper on the outside and after about a lap side-by-side White eventually made it stick to claim 3rd, Norton went on to win from, D.Tossell, then White. 8 cars made it out for the Final White took the early lead followed by Griggs, then Norton and they built up a gap, D.Tossell had a tank slapper then a misfire giving Shelper 4th, Shelper closely followed by Nohring managed to reel Norton in but couldn’t find a way passed. White went on to win by about ½ a lap, from Griggs, then Norton.