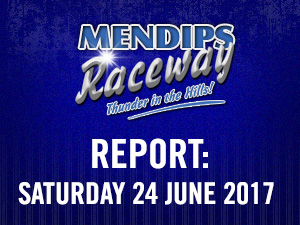 It was the big one. Whilst it threatened to rain all weekend, and after a few spits and spot on Sunday morning, it was here – the 2017 BriSCA Formula 2 British Championship Weekender

Despite a healthy booking list, there was a considerable amount of last minute cancellations and no shows, which was extremely disappointing in the late 40’s. A 3 out of 7 heat system was deployed in qualifying which saw Gordon Moodie (7) take 2 first and a second – a hand that would gotten him pole position in any other year. However it was Nathan Maidment (935) who trumped Moodie with a full house – 3 wins out of three heats. With a win from Dave Sansom (352), the last heat was all important for some. 2 laps to go saw Steve Gilbert’s (542) luck run out as his engine expired in spectacular fashion going down the hill. He collected Dennis Middler for company, as the leaders came as the yellow flags came out.

First on scene was defending champion Chris Burgoyne (647) who took the brunt of the ensuing crash as Gilbert’s discarded oil made traction near on impossible for the pack. Instantly there was concern for Burgoyne in the melee. The Scotsman was taken away by ambulance with a later diagnosed broken vertebrae. Following a delay, the race was declared at the last completed lap, when Burgoyne led, and those who the yellow was called for (542 and 41) excluded from that result as the cause of the stoppage. A terrible end for the title defence of Burgoyne.

With the light fading, and the medical delays, it was decided that the remaining races would be cancelled. A total shame because the racing was top notch on the Saturday.

Sunday brought the Championship as the first event of the day. Mementos, pomp and ceremony saw 28 drivers take to the grid, following the withdrawl of 6 cars, mostly those involved in the heat 7 ruckus. 1972 Champion Brian Jones sent the drivers on their way, and all eyes on the front row. Moodie got the start and Maidment was determined not to let him get away, as he fired the silver roof into the wall, at his own detriment, causing a pile up that took out Ben Lockwood and Lewis Geach amongst others. A red flag was declared, and some drivers’ teams took the opportunity to try and pass tools to fix cars, which rendered them disqualified. After an aborted restart, Luke Wrench (560) rolled, taking himself and other favoured runner Dave Polley (38) in the incident. Come the next start it was Chris Mikulla who led them. What was to follow was classic stock car racing, as Messrs Mikulla, Riggal, Bradbury and Wallace. As the boards came out, Craig Wallace (16) has started to develop a lead. Wallace to a fine and handsome win, and with it the title from Riggall, who pipped Bradbury for 2nd on the line.

With the business end of the meeting down, it was very much business as usual, as Wallace and Maidment took the heats, Matt Stoneman the consolation. Come the final – it was to become another Bristol final win for Moodie, who led home Bradbury after a plucky drive from Steven Forster (652). Bradbury then signed the meeting off with a win in the Grand National

During the Unlimited Back to Basic Bangers, there were wins for Jason Moore (739) and Rob Mills (404) who had the audacity to race a new shape Beetle, which roared him to success in heat 2! Ryan Hughes (852) took another heat. Final time and it was Mills who led but Jake Carless (744) took the victory. Sadly the DD – often the best bit in B2B Bangers – fell by the wayside with the meeting abandonment.

Sunday saw a lot of old names come out to play in the Graham Salter Tribute. Nick Courtier (114) took the first heat, and Richard Sparks (247) taking the second. Dyerbolical Dyer (731) took a feisty consolation, which saw an incident with Dean Quinn (27) also being taken away for medical support. Come the final Sparks was not to be undone – unlike last year where he got docked for afters! – from Danny Hunt (382) and Paul May (778). The DD went the way of Big Mac (440)

A meeting much past their bedtime as the kids came out to play, with the retiring Cameron McColm (34) taking heat 1. The second heat went the way of Jacob Filer (77) who reeled in Taylor Sealy (730). The final heat saw McColm take a second win. Sadly, the Junior Rod final was another casualty of the meeting abandonment

Sunday saw a much improved line up of 12 Hot Rods, serving as filler in a packed programme. Veteran and hot rod legend Colin White (718) stole the show with two flag to flag victories in the heat and final, whilst James Griggs (258) took the other in a rather off day for the track champion.

An exhausting weekend of racing, with plenty of action – we hope you all enjoyed it!