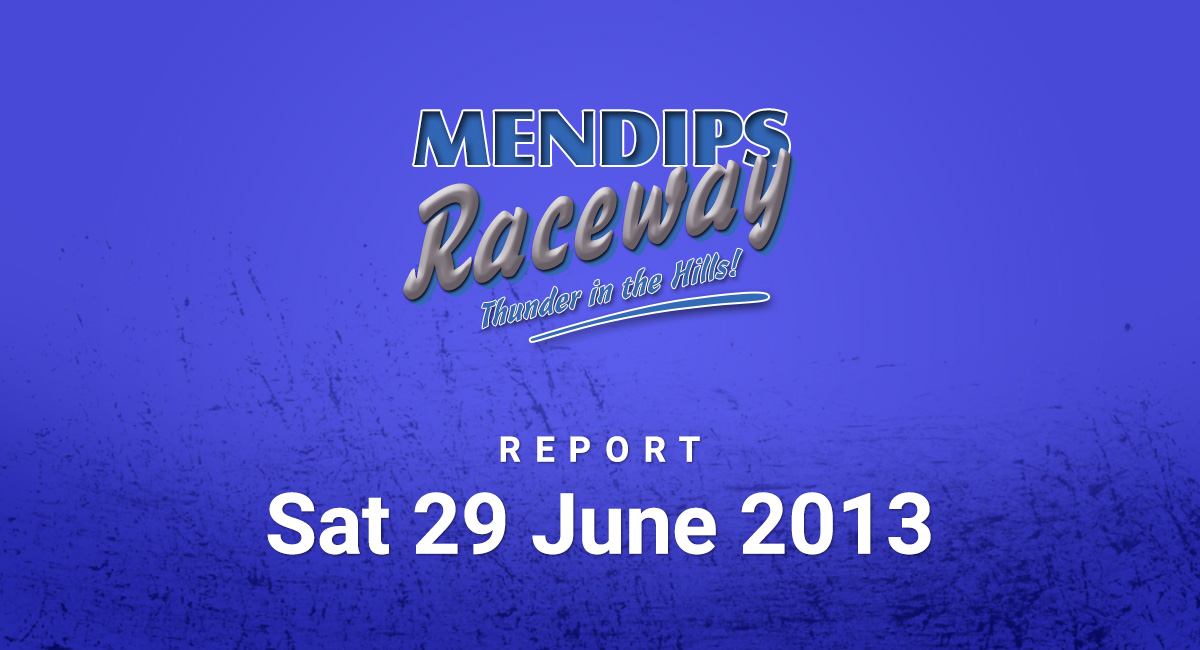 The Saturday of the two day end of June event got things underway under clear blue skies for the annual National Bangers meeting for the ‘British Beef’ featuring all Ford rear wheel drive, the once a year appearance from the BriSCA Heritage Stock Cars and the Hot Rods.

There were a few no-shows from those booked in the Bangers, but equally a few late additions too which brought the entry to 27 cars.  As has now long been the case for this meeting there was a good representation from the south coast and some very smartly turned out cars all round.  Cars of the evening were a Mk3 Cortina for 266 Micky Ford and a Ford Consul Mk 2 for 136 Paddy Connelly.  Despite the entry, the pre-planned format was stuck with and the two heats featured half of the available cars.

The first of them saw several go out in a ‘jacking train’ on the top bend.  40 Pete Stanley took the victory and then in the second heat 517 Scott Weldon, another veteran star took the win having survived two re-starts.

The consolation saw another wrecking train on the top bend and it only left two circulating with 83 Andy Beaven the first of them.  The Final ended up being open to all with the qualified drivers at the front and those who hadn’t at the back.  Once again the top bend was the place for wrecking with several hits going in.  Both Stanley and Weldon had spells in the lead but 54 Tom Davey made the race his own by spinning both aside and went on to take the win by over half a lap.  Weldon fought back for second and Stanley came through for third.  Weldon took his second win of the evening in the Allcomers and then the DD was very short and sharp, ending in an absolutely crunching head on between 241 Liam Cracknell and 733 Ricky Stroud and as both came to a dead stop at the same time a tie was declared.

Despite a disappointing entry of Hot Rods, the racing was close and competitive throughout.   125 Mike Hibbert took the first heat and then 718 Colin White the second in his close run battle with 282 Steve Hunt.

The Parkhouse Trophy Final was led off by 258 James Griggs and he held on for much of the way.  Firstly there was pressure from 205 Mike Norton and then they were joined by Hibbert, White and then Hunt who recovered from a bad start.   Griggs fended off White impressively and then with five to run in an inspired move Norton was able to get his car up the inside of both on the exit of turn four.  In all of this White managed to apply what was apparent contact on Griggs to move up into second.  However, the drama was not over as Norton found himself with the backmarker 788 Mark Shelper in his path and this allowed White to get past him and go on an take the chequered flag.  But, the black cross shown for his contact on Griggs was put into action and Colin was docked two places.  He was none too impressed and refused his third place trophy, but as in many sports, the Steward’s decision is final.  Therefore it was Hibbert who took the win with the unlucky Norton second.

On what was a busy weekend for the BriSCA Heritage movement there were 11 of the F2 variety and 10 of the F1’s.  Despite the lower than hoped for entry of the F2’s they put on some very fast looking, competitive and hard racing on what was the ninth anniversary of them becoming a fully-fledged formula.

Things got off to a spectacular start on the first corner of the first heat when 533 Andy Kaye was tipped into a roll after a tangle with 494 James Pratt and 264 Pete Welland.  The re-started race saw Pratt hold off 505 Mick Whittle all the way to the flag.  Pratt was in the wars though in heat two when he had a big coming together with 261 Jason Lambourn which brought out the yellow flags and ended both of theirs evening.  763 Andy Bateman relived Welland of the lead after the re-start and went on to win.

The Final came down to a battle between Bateman and Whittle and the latter spun which left 763 clear, but he was then caught and hounded throughout the latter part of the race by 773 Nick Whitney.  However, he couldn’t find a way past and Bateman took the win.  Whittle recovered for third.

In the F1’s it was a race of two classes with the older 1950’s machinery at the front and then 1960’s and 70’s spec starting a lap handicap.  Over the course of their ten lap races it worked out well, with a very close finish in heat one as 3 Mike Shirley just got to the line ahead of 161 Gary Greenway.

In the second race Shirley swapped cars with 146 Roy Clarke and raced to second place behind 252 Dan Squire.

The Final also came down to a close finish after the trio at the rear closed in on 146 Clarke who was the long-time leader.  Squire hit the lead with two laps to run and went on to win whilst second place was almost a phone finish with the six-wheeled car of 65 ‘Gentleman’ John Stirk just beating Shirley to the line.