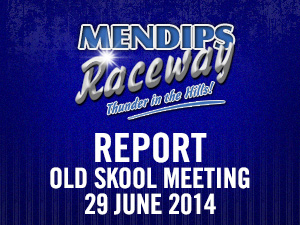 The second day of the summer weekender always looked set to be one of the highlights of the season, with the ‘Old Skool’ unlimited National Banger Graham Salter Tribute meeting.

When it was first run last year, it was a little bit of a venture into the unknown with an invite only list, instigated by former star men 300 Jon Ayles and 404 Rob Mills.  It was a big hit, and actually became pivotal in how and what many views on Banger racing sits today.  Thus when it was announced that it was to be repeated this year there was obviously a little bit of thought on how on earth the hugely successful event could be followed.

The answer was that it surpassed the 2013 running.  There were more cars – a highly impressive total of 89 cars raced, a wide range of drivers from the south and southwest of England from those who are the current day big name drivers, drivers who race rarely now and in some cases others who have not raced in a long time, or since the meeting last year.  Not only this but the ‘material’ the drivers arrived to do battle in was simply stunning along with the paintwork which was equally just as stunning, on a weekend when the Goodwood Festival of Speed was taking place, this was almost the ‘Banger Revival’ !   There were several Rover P5’s, Mk10 Jags, a Mk2 Jag, XJ6, XJ Jags and enough cars deemed as ‘classic’ to warrant an entire heat.

The first heat was for the non-classic (as such) and non-Granada.  Under the ‘Old Skool’ rules the big hitting contact is kept until the latter part of the meeting.  But, the heats still had plenty going on, including a rollover on the home straight in the first for 728 Jason Lake.  After the re-start it came down to chase from 130 Dan Cook on 517 Scott Weldon with the veteran just holding on for the flag.  The second heat was all Granada’s, once the staple diet of Banger racing but note that many of these cars are (or were!) 40 years old.  136 Paddy Connelly took the victory, with Saturday evening ‘British Beef’ winner 67 Ricky Beasley in a Coupe unable to reel him in.  The classic car heat, featuring a highly impressive 34 cars.  We did run a classic car meeting on Easter Sunday for several years, but never with this amount of cars, and thus it was easily the most number of old cars seen around Mendips Raceway in modern times.  With the original engines in the cars, a lot of them started to boil as the race went on (something which was par for the course for many, many years) 700 Les Brice was the runaway leader until 266 Ian ‘Tiggy’ Meaker rolled on the back straight and this brought out the red flags.  Brice was spun at the re-start and it was the mightily impressive XJ Jag Estate of 523 John Swanborough who took the lead and went on to win.   With 47 cars on track for the consolation the decision was made to run two.   The first saw a rollover for the (two-door Jag) of 782 Glenn Boyce.  404 Mills driving a Granada Limo went on to take the win – leading to the question that when was the last time a Limo won a Banger race?  The action (perhaps) stepped up the plate a race early in the second of them, but never the less it was entertaining and the win went the way of 298 Sam Wyatt.

With 32 cars qualified for the Graham Salter Tribute Final, the scene was set.  There was an early pile up on the exit of turn four with several piling in, but there was always a way through and it was 190 Dominic Gumbleton who was the early leader.  However, the pile up lead to debris and a resultant red flag for a re-start, with five of the 20 laps run.  Gumbleton never really got back into his stride after the re-start and it was 67 Beasley who took over.  He threw his Granada Coupe around the track in fine style, throwing the back end around.  However, whilst it was a clear win, 282 Steve Hunt did keep him in his sights in his BMW.  But for Beasley, it was his second feature race win of the weekend. Hunt showed he is still class with second and 120 Mark Ashley, in a Triumph Stag was third place.   35 cars for the Allcomers and it turned into a big pile up on the top bend, with one after the other piling in,  This brought out the red flags.  After the resumption it was Weldon who took his second win of the afternoon – to round out a truly classic afternoon of Old Skool Banger racing, in many more ways than one.

Whilst the day was all about the Bangers, there always needed to be a support on the bill and the Junior Rods fitted the bill nicely.  Running to a two from three heat format 784 Henry Murray picked up from where he left off at the previous meeting by winning heat one and then followed it up with another in heat two.  Heat three came down to a very close finish with 66 Becky Pearce and 700 Ben Brice crossing the line side by side.  However, whilst Pearce was just first across the line, she was dropped two places for using what was deemed avoidable contact on 16 Keiren Gardiner in the earlier battle for the lead.  Thus Brice was promoted to the win.  Given his form, 784 Murray looked odds on for the Final, but his pace had simply gone and he lost the lead early on to 376 Dan Kent and 66 Pearce and then dropped back.  Kent opened out a good lead and looked set for a comfortable win, but for a yellow flag when 225 Joe Edwards found himself stranded on the back straight.  It was Pearce who lost out at the two lap dash re-start, as Kent was able to pull clear again and he took the victory.  240 Rachel Bowring made second and 700 Brice third.

The Heritage Stock Cars, off the 1950’s and early 60’s variety had a trio of races, just as they did on Saturday.  144 Tony Clarke won the first, 21 Robin Izzard the second in the older of the cars but in the third 3 Mike Shirley, in his Ellis Ford replica circa 1965 came through from the full lap handicap to take the victory.