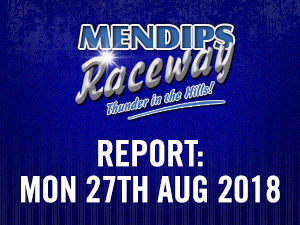 A big crowd turned up for CARAVANDALISM 18. The weather was mostly overcast with a couple drops of drizzle later in the afternoon, with the track starting off a bit damp. 27 Dean Quinn, 304 Tim Weare, 58 Martin Dalton and 364 Darren Feltham was racing in more than one formula.

14 Caravans came out for CARAVANDALISIM 18, and 80 Michaela Cook had a very smart Car and Caravan, within the 1st lap there was a stoppage for a big pile up on the pit bend! 0n the Re-Start 111 Tommo was dishing it out a lot, and 595 Ben Wall launched into D.Quinn, then there was another pile up resulting in another stoppage, 284 Leon Benjafield, 111 Tommo, Feltham and D.Quinn was the only driver’s to make the re-start, then on the last lap Benjafield was waiting just before the finish line facing the wrong way blocking the track, so Quinn hit Benjafield head-on and shoved Benjafield across the finish line also setting of Benjafield’s air bag’s!!! Then Quinn went on a wrecking spree to celebrate his 4th Caravan Victory in a row!

24 Special Rods turned up, with a lot of close racing and overtaking, and they were running a 2/3rds format with a qualifiers only Final. In the 1st Heat 711 Matt Gregory who was in pole position took a while to out drag 108 Adam Headland for the early lead, then 81 Andy Hawkins got up to 2nd from 4th then Hawkins relieved Gregory of the lead, and Hawkins built a big lead further back 46 Angie Harris got spun out and 244 Dale Edwards had a tank slapper, Headland and 41 Dene Howard retired, with 3 to go 120 Andy Latimer caught Hawkins but was not able to mount a challenge, Hawkins went on to take the win from A.Latimer, then Tim Weare (from 10th on the grid). In the 2nd Heat Headland quickly got from 3rd on the grid to take the early lead, and 244 D.Edwards was quick up to 2nd from 7th on the grid, with 993 Darren Foss up to 3rd, then D.Edwards nipped up the inside of Headland to take the lead, then Hawkins and 556 Stuart Garland found a way past Foss for 3rd and 4th, then 181 Ian McLaren ½ spun in the middle of the turnstile bend and was collected by 53 Angus Hawkins for a stoppage, D.Edwards led the re-start from Andy Hawkins then Garland, then Foss and these positions stayed the same till the end of the race, although on the last lap 701 Ben Brice(from last on the grid) did try and go round the out side of Foss but couldn’t make it stick! In the 3rd Heat Gregory took the early lead, and 75 Gary Hunt was quick up to 2nd from 9th on the grid, then Hunt found a way past Gregory to relieve him of the lead, and Hunt built up a big lead and Foss got up to 2nd with Garland closely behind then Garland found a way past Foss for 2nd, further back D.Howard retired again and Mclaren got spun out and up the other end there was a 3 car crash, and they all managed to get going again apart from 224 Jordan Edwards who had to retire, on the last lap somehow 581 Ryan Wallace ended up facing the wrong way and had to reverse to the infield for safety!! Hunt went on to take the win from, Garland, then Foss, then A.Latimer, then 7 Will Harraway the 1st of the Red Tops!! 20 Cars came qualified for the Final Gregory took the early lead from Headland, then Garland went around the outside of Headland and Gregory to take the lead, Garland then built up a big lead then A.Latimer and D.Edwards, found a way past Headland and Gregory for 2nd and 3rd, Garland went on to take the win from A.Latimer, then D.Edwards, then Weare the 1st of the Red Tops.

There was a good turn out of 12 Hot Rods with a lot of close racing and overtaking, there was running a reverse grid format with the highest point scorer in the Heats getting pole in the final etc. In the 1st Heat pole sitter 788 Mark Shelper built up a big lead from pole from 117 Dave Tossell, further back 282 Steve Hunt, and 718 Colin White was carving their way through the pack from near the back of the grid using the inside and outside lines then Hunt and White went round the outside of Tossell for 2nd and 3rd, and 611 Jamie Bryant went round the outside of Tossell for 4th, and with 3 laps left Hunt and White managed to catch Shelper and the 3 of them crossed the line nose-to-tail, Shelper took the win from Hunt then White, then Bryant. In the 2nd Heat White quickly built up a big lead from pole and 57 Graeme Taylor got too much wheel spin from 2nd, , so Hunt went straight from 3rd to 2nd, then Taylor put himself in the wall, and managed to carry on, and later 35 Neil Muddle had a spin, and 28 Tim Seaford spun out in front of Shelpar, White went on to win by about ½ a lap from Hunt, then Bryant (from 7th on the grid), then Shelper(from last on the grid). White qualified on pole position for the Final from Hunt, then Shelper, then Bryant and a soon as the green flag dropped White’s car stalled on the grid boxing in Shelper, and Hunt shot into the lead with Bryant closely behind, then within the 1st lap Hunt’s car broke down giving Bryant the lead from Shelpar, forcing Hunt to retire, and White had to limp to the infield, and Bryant and Shelper was running most of the race node-to-tail then in the last few laps there was some oil on the track on the turnstile bend and 49 Maurice Cole went in the fence backwards with Taylor for company and 44 Dan Fieven got caught out and Muddle spun and then Bryant accidently jacked up Taylor with a few others nearly getting involved which resulted in a Red flag and the result was declared with Bryant taking the win from Shelper.

There was a good mix of cars in the Banger’s with a lot of Ford Focus’s, Sierra Estate’s, and a hatchback, Micra’s Honda Civic’s and Astra’s amongst other cars.

Only 12 Robins turned up but they all managed to put on a good show. In the 1st Heat 17 Lee Robins put Quinn onto his side then he bounced back to all three!! Just after the chequered flag 509 Matt Dixon ended up on his roof!! Robins went on to take the win from Weare, then 26 Russell Gillingham, and Quinn took the Entertainers Award. In the 2nd Heat 272 Mitchell Turley had a massive roll and he took the Entertainer’s Award, Robins took the win from Quinn, then M.Dalton, then Weare. In the Figure of 8 Race 26 R.Gillingham, 25 Kylie Gillingham, Weare, and Dixon all managed to get up on two wheel’s and back on to all three!! Although there were a few near misses on the crossover nobody made the connection although Dixon was trying hard! Dixon took the win and crossed the line on his side then bounced back to all three!! With Feltham in 2nd, from M.Dalton.