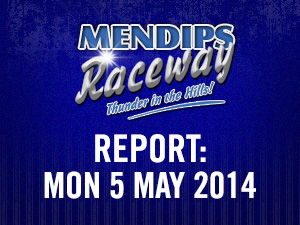 May Day Bank Holiday Monday once again saw the sun shining, even if the wind was blowing, for a three formula meeting and each very different with the BriSCA F2 Stock Cars, National Bangers under 1800cc and Reliant Robins making up a 13 race programme.

Bank Holiday weekends are a busy time for the F2 Stock Cars and a few would be attendants were lost at meetings in previous days, but never the less, the entry stood at a respectable 26 cars and this included three track debuts, all of whom were white graded and with it being the first round of the Rookies Reward series for the white and yellow graded drivers, it was pleasing to note that 15 of the total entry came from these grades.   The race was won by 891 Darren Wade from fellow Cornishman and both won a voucher for a set each of shock absorbers from generous backer Shock-Tec.  The first heat saw 886 Chris Bradbury pick up from where he left off on his domination from Easter by winning but then in heats two and three 105 Rowe and 891 Wade proved too hard to catch for the higher grades with no need for a caution flag.  The Final was led by 740 Neil Langworthy until he lost out after an early yellow flag to 528 Shane Hector.  He held on until just before halfway, but the stars were closing in with Bradbury the head of them and he pushed 105 Rowe into Hector which sent him spinning, and he took the lead.  However, with Hector left stranded where he was spun the yellow flags once again were needed to be shown.  This put everyone back on terms with each other but Bradbury had it all covered and pulled clear of 783 James Rygor on his way to (another) Mendips Final victory.  Rygor was second whilst the battle for third place that went on over the last few laps between 522 Chris Mikulla and 676 Neil Hooper ended on the last corner with both taking each other out.  This allowed 605 Liam Rowe to grab the other trophy place.  The Mikulla/Hooper battle did continue with some “afters” which resulted in the latter being disqualified from the remainder of the meeting.  Rygor came through to win the Grand National.

From the big cars of Thunderbolt, it was small cars in the National Bangers with under 1400cc cars in a World Championship qualifying round.  This, and the format produced a very cosmopolitan entry of 34 cars which included several drivers from the south coast and a quartet from Cornwall.  To make it so that the bigger fields came later in the day, the entry was halved for the two heats which were won by 353 Same Trim and 842 Jack Perkins accordingly.  With 32 cars on track for the Final, and those who had scored points in the heats at the front it was always going to be a busy one.   Soon after the start there was a huge pile up on the bottom bend, which necessitated a complete re-start and left 242 Martin Quinn feeling shaken about.   The re-start saw 384 Scott Benjafield get into the lead, tracked by 363 Trim until he pulled on to the infield and then re-joined again, albeit several laps back.  Benjafield was well clear and looked set to win, but Trim took it upon himself to try and stop him, which he almost did, but such was 384’s lead he was able to hold on.  However, when the engine on his Fiesta started to cry enough on the last lap, he was a sitting target for Trim, who did stop him.  This was unfortunate, but that is Banger racing.  This 329 Kev Elson picked up the pieces and with it his first win at Mendips.  440 Mac Mills made second and as he had completed enough distance, Benjafield was granted third as the only other finisher.  Trim simply hadn’t done enough laps to be classified.  The Allcomers saw 27 Dean Quinn take the win.  This went into the DD, which was brutal to start with, including a revenge big hit from 252 Steve Buglar on 842 Perkins from the Final.  It came down to the last three of 517 Scott Weldon, 329 Elson and 440 Mills and after several exchanges it was Elson who completed a fine afternoon with the win.

The Reliant Robins saw 13 cars present, with it being the third round of the Midlands Mayhem series it did not produce as much visiting interest as we’d hoped but never the less there was plenty od spectacular action enjoyed by the large crowd.  With added prizes for entertaining as well as winning they had it all to go for.  504 Andrew Worthington won heat one and then followed it up with another in heat two.  The Final saw the action increase, starting with a big roll by 25 Kylie Gillingham and 445 Nikki Loader and then another by 270 Shaun Baker.  At the front, 504 Worthington got into the lead after 444 Mark Loader had initially held sway.  However, 504 was stopped by 49 ? but in doing so they both let 304 Tim Weare through and he went on to win.  49 ? was second and 99 Steve Chappel third.