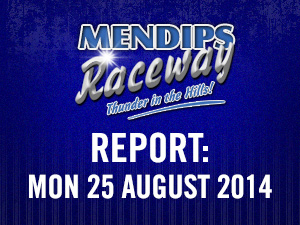 It was a fairly decent size crowd for the CARAVANDALISIM XIV who braved the elements. It rained for the whole meeting, and mostly heavy with the fog rolling in and out all afternoon, with some races run in foggy conditions. With very wet and difficult track conditions, and a lot of drivers was struggling for grip!! The Top Tin Awards went to 270 Shaun Baker(Slug) and 006 Daniel Hibbs with their Caravans. 55 Alan Machin, 129 Lee Dalton, 181 Andy Churchill, and 70 Jamie Thomas had very well presented Bangers.

There were 10 Hot Rods out in the 1st Heat 55 Alistair Lowe soon found a way past 35 Neil Muddle to relieve him of the lead followed by 788 Mark Shelper and 205 Mike Norton. Lowe then built up a big gap, 718 Colin White worked his way up from 8th to 2nd passing on the inside and outside, but Lowe was too far ahead to catch. Lowe went onto the win from White then 117 Dave Tossell. In the 2nd Heat 18 Larry Langmead took the early lead,

and then Lowe managed to find a way past the inside of 125 Mike Hibberd then Langmead to take the lead. Norton tried to go round the outside of Hibberd but couldn't make it stick, White managed to get up to 2nd from near the back of the grid with 5 laps to go but lowe was too far ahead to catch. Lowe went onto win from White then Hibberd. 10 cars made it out for the Final Shelper then Langmead found a way past Muddle to relieve him of the lead, Lowe was following White as he worked his way up from near the back of the grid using the inside and outside lines. White then found a way past Shelper to relive him of the lead, with Lowe not far behind. White went onto take the win from Lowe then Shelper, retaining the West of England Championship sponsored by Shocktec.

The Special Rods were racing a 2/3rds format with a lot of place swapping in all the races. There was 15 cars out for the 1st heat, 192 Ashley Raymond out dragged pole sitter 364 Darren Feltham to take the early lead.304 Tim Weare, 51, Rob Price and 7 Will Harraway all had spins in the very difficult conditions with a lot of others nearly losing it!! 23 Ross Stuckey and 720 Dan Latimer was going well from near the back using the inside and outside lines, and just before the ½ way mark R.Stuckey found a way past Raymond to relive him of the lead. R.Stuckey went onto win from Raymond, then D.Latimer and 18 Russ Colenutt from last on the grid. 16 cars were out for the 2nd heat Feltham shot round the outside of the lead two cars from 4th on the grid to take the lead on the 1st corner!! Further back there was a 4 car pile-up which they all managed to get going again, then 8 Andy Russell had a ½ spin and 26 Andy Bennet had nowhere to go and accidently T-boned him! Just before the ½ way mark Feltham spun handing the lead to 85 Andy Pincott. Price had a spin, and R.Stuckey spun on the last corner and crossed the line in reverse to take 5th place .Pincott took the win from 47 Richard Howard then D.Latimer. In the 3rd heat 324 Paul Frankland out dragged pole sitter 6 Andy Wadley to take the early lead R.Howard and Colenutt was going well from the back using the inside and outside lines. On the last lap R.Howard and Colenutt caught Frankland, and on the last corner R.Howard went round the outside of Frankland with Colenutt closely behind. Frankland and R.Howard crossed the line side-by-side, and R.Howard was declared the winner from Frankland, then Colenutt. 20 cars came out for the Final Feltham lead from pole with Frankland and Raymond in the battle for the early lead, Feltham had an off going onto the infield giving Frankland the lead. When Frankland went round the outside of a backmarker Raymond found a way up the inside of both of them to take the lead. By the ½ way mark R.Stuckey was up to 5th from 17th on the grid, Price had another spin, and with 5 laps to go R.Stuckey found a way past Raymond to relieve him of the lead. R.Stuckey went to take the win from Raymond then Frankland. This being the final meeting of the Summer Series, the grade wins were awarded to Russ Colenutt (Superstar), Andy Pincott (red), Dan Latimer (blue) and Alan Lettley (white).

There were 18 Reliant Robins out for the 1st heat just before the start line 504 Andrew Wothington ended up on his roof and 266 Micky Ford ended up on his side causing a pile up and a complete re-start!! There were lots of ½ and full rollovers including 445 Niki Loader and Ford twice. 99 Steve Chappell took the win from 304 Tim Weare then 364 Darren Feltham, and Ford won the entertainer award. 16 cars came out for the 2nd heat Ford and N.Loader both ended up on their side, and N.loader got disqualified for giving 54 Tom Davey a head-on. Weare took the win from 26 Russell Gillingham then Feltham. In the Figure-8 race there was quite a few near misses on the crossover with a couple of drivers braking for the crossover, 21 Brad Worthington and 25 Kylie Gillingham were the only drivers who managed to connect on the crossover. 3 Dan Tytheridge took the win from R.Gillingham then Feltham. In the D/D there was a lot of rollovers and Tytheridge and K.Gillingham had a head-on, then K.Gillingham T-Boned N.Loader, putting N.Loader on his side, and the D/D ended with 21 Brad Wothington and 444 Mark Loader having a head-on and M.Loader was the last robin moving!! Ford was awarded the win in the Entertainers League, and Tim Weare (304) won the Points Championship.

15 Car and Caravans came out for CARAVANDALISIM XIV there was mayhem from the off and 270 the Slug decided to drive through his own caravan shell that he lost earlier, which he wore for most of the race!! 189 Jamie Knox went on to take the win then decided to crash into the last complete caravan!!