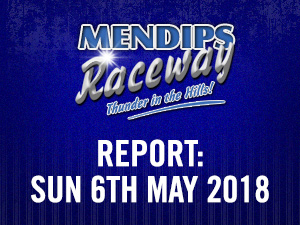 There was a decent size crowd on a hot and dry afternoon for the Bangers THUNDERBOLT 18.

The meeting began with all cars assembled on the track, with the two Allsorts coloured cars of Darren Feltham (364) and Jamie Cocks (856) to the fore, and promoter Graham Bunter gave a tribute to Paul Feltham, drivers, scrutineer, and Steward, who recently lost his battle with leukaemia. The drivers and crowd held an immaculate silence, and then broke into a round of applause, for a great character who will be sorely missed at Mendips Raceway

There was a good mix of cars including Granada Estates and Jaguars and 284 Leon Benjafield had a Toyota Previa, and 77 Paxti ‘Patch’ Beasley had a Bentley. 239 Steve ’Nemesis’ Carter was awarded The Best Wreck.

40 Bangers turned up, including Multi-World Champions, 331 Boxer Jack (who was the furthest travelled), and 190 Steve Bailey, and also 74 Adam ‘Scratchy’ Hitchcock 2017 P.R.I. World Champion, and all the drivers put on a good show with a lot of hard fast racing, with a lot of big hits!!

Although the 1st heat had the least action. The cars were split in two Heats in the 1st Heat there was a big push on the 1st bend with a few cars going in, and amongst the action Boxer Jack fired two cars into the fence in one hit, 114 Liam Lake went on to take the win from Boxer Jack. Amongst the action the 2nd Heat Nemesis and 262 Buddy James had a head-on then 362 Jonny James jacked up Nemesis, making Nemesis the meat in the sandwich!! There was also a lot of action on the pit bend, and amongst the action Patch jacked up 228 Matt Fall, and Scratchy jacked up Fall and 739 Jason Moore ended up in the fence! 67 Rickie Beasley went on to take the win from, 103 Jack Deacon (who crossed the line 1st but got docked a place), then 241 Liam Cracknell.

About 22 cars came out for the Consolation and only 8 made the distance and amongst the action 658 Adam Dorse ended up in the fence and 514 Marty Eighteen clipped Dorse, then Patch jacked up Dorse bringing about a red flag and everyone was okay, there was a few knocks and spins after the re-start and Nemesis ended up taking the win, from 45 Lips, then 323 Dean Kelly.

22 cars qualified for the THUNDERBOLT 18 Final Lips led most of the race from pole even spinning a couple of cars out, and amongst the action, Boxer Jack had made it up to 2nd until he decided to give 333 Charlie Randell a head-on, then Boxer Jack went round and jacked up Randell, then Burt jacked up Boxer Jack, and Lake jacked up 246 Aston Burt, then Lips spun out Patch, then Patch decided to give Lips a head-on finishing his race! Bailey went on to take the win, from 278 Sean Brokenshire, then 988 Billy Dennison, and there were only 7 Finishers!

19 cars came out for the Allcomer’s Race which ended up more like a D/D, and amongst the action Lake and Burt head-on and 241 Liam Cracknell, and Nemesis, and another car went steaming in for a jacking train, and Dennison ended up on his side, and the race was declared, with Dennison as the winner, from 372 Jay Matthews, then 440 Macauley Mills. Only 7 cars came out for the D/D with Bailey dishing out most of the hits and it ended with Bailey and 771 Michael Pidgeley having a head-on and Benjafield jacking up Pidgeley, then Benjafield finishing them off, and Benjafield was the last car running.

In the Special Rods it was good to see some visitors from the Ringwood Track, and 192 Ash Raymond brought out the 1st BMW.

12 Cars came out for the 1st Heat 108 Adam Headland out dragged pole sitter 53 Angus Hawkins to take the early lead from Raymond then 775 Brad Hunt, and Headland built up a big gap, then Hunt nipped up the inside of Raymond for 2nd, further back 43 Andy Howard was leading a four car battle, and with 3 laps left A.Howard, and 135 Jim Cannon went round the outside of Hunt to take 2nd and 3rd, then on the last lap Headland broke down, giving A Howard the lead and the win, from Cannon, and Hunt.

13 cars came out for the 2nd Heat 266 Micky Ford took the early lead from pole from 364 Darren Feltham, then Feltham went around the outside of Ford to take the lead then 556 Stuart Garland went round the outside of Ford, for 2nd, then it looked like 244 Dale Edwards cars was smoking and 831 Scania Dave spun and was collected by 224 Jordan Edwards, 720 Dan Latimer, 47 Richard Howard, and 244 Dale Edwards, and Dan Latimer’s car had a lot of damage. Feltham led re-start from Garland then Ford, in the last few laps Feltham retired, then 701 Ben Brice who started last on the grid reeled in Garland and the last lap Brice tried going around the outside and made it stick, and Brice took the win from Garland, then 181 Ian Mclaren.

7 cars came out for the Consolation including R.Howard who managed to repair his car, Feltham took the early lead from pole from Raymond and built up ½ a lap lead R.Howard passed most cars on the outside then went round the outside of Raymond to relieve him of 2nd, but Feltham was to far ahead to catch. Feltham went on to win from R.Howard, then 581 Ryan Wallace.

18 cars came out for the Final B.Hunt took the early lead from Ford, then Wallace got spun out and later, 75 Gary Hunt and 335 Joey Cannon had a slight coming together and Joey Cannon was left stuck on the home straight. B.Hunt led the re-start from Ford, from 711 Matt Gregory, and Dave. Then Garland then Dave and Garland, found a way past Gregory, Ford and B.Hunt take the 1st and 2nd, then McLaren had a ½ spin in front of R.Howard and Jim Cannon nipped passed R.Howard, Dave went on to win from Garland then Jim Cannon, R.Howard, then Brice from last on the grid leading the other star grader’s home.

16 cars came out for the Grand National with Dave on pole but lap down 831 was going well until he out braked himself and nearly hit the wall. Brice and Mclaren was going well until there was a coming together on the pit bend and Mclaren retired with damage, and Brice got stranded. Ford led the re-start, from Headland, then Garland. Ford built up a big lead from Headland, then Garland found a way past Headland for 2nd then set about reeling in Ford on the last lap Garland caught Ford but on the last corner Garland overcooked it and spun himself out, but then Garland celebrated with a doughnut!! Ford took the win from Jim Cannon, then B.Hunt.

The Junior Rods were running a 2/3rds format with a Qualifiers only Final.

In the 1st Heat 14 cars came out, 35 Charlie Johns took the early lead and built up a gap from 437 Ryan Worthington and 8 George Jenkins quickly got up from 7th on the grid to 3rd then Jenkins went round the outside of Worthington for 2nd with 11 Jack Devine, 190 Ewan Gumbleton, 36 Josh Weare and 77 Jacob Filer not far behind, then they set about reeling in Johns, and Jenkins, Devine, Gumbleton, and Weare passed Johns going through the back markers, with two laps left Gumbleton went wide and Weare didn’t need a 2nd invite, and on the last lap Jenkins went wide and Devine nipped up his inside and they crossed the line side-by-side and Jenkins just managed to keep his nose ahead to take the win from Devine, Weare.

In the 2nd Heat 14 cars came out and Johns nipped from 3rd on the grid to take the early lead, from 28 Ava Hawkins, and Johns built up a big gap from Hawkins who stayed there for a few laps until 26 Leah Bennett passed Hawkins closely followed by 77, Devine, 100 Thomas Weeks, 190 all swapping places, and on the last lap Weeks got the better of the battle and tried nipping up the inside of Bennett and they crossed the line side-by-side and Bennett just pipped him to the post, Johns went on to take the win from , Bennett, and weeks.

14 cars came out for the 3rd heat, Hawkins took the early lead then 236 Alfie Brimble, and 176 Maddy Giambaressi had a coming together and Giambaressi rolled, Hawkins led the re-start from Worthington, then Jenkins, then Weeks managed to pass Bennett, Brimble, Jenkins, Worthington then Hawkins, mostly on the outside to take the lead then built up a big lead, Weeks went on to take the win from, Weare, 75 Jack Buckingham, then Hawkins.

In the Final 15 cars came out and Hawkins took the early lead from pole and Filer, and Weeks was quick up to 2nd ,and 3rd, from 9th, and 11th on the grid, Weeks spent a few laps on the outside of Filer before he could make it stick to take 2nd, then Filer retired, then Weeks found a way past Hawkins to take the lead then on to win from, 36(from 14th on the grid), Gumbleton (from 13th on the grid), and Buckingham (from last on the grid).