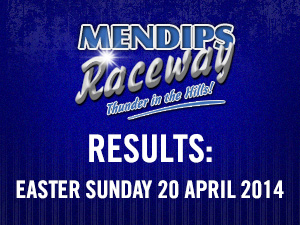 After all the Spring weather it was probably typical that the rain would arrive for our Easter Sunday meeting, and it duly did, although perhaps not as bad as had been forecast. That said though, the meeting finished literally with minutes to spare as a deluge of almost biblical proportions fell as the last race ended.

The entry in the BriSCA F2 Stock Cars was perhaps a little down on what we might have expected, at 37 cars, but never the less there were travellers from far and wide including three from Scotland. The opening heat was the only dry F2 race of the afternoon and reigning six times track champion 886 Chris Bradbury once again showed he is the master by charging through to win. The rain arrived during heat two, but it didn’t hamper the World Champion’s progress, as 783 James Rygor came through to take the win. The wet track aided to several crashes in the consolation and unfortunately in one of them, it left 890 Paul Rice needing to be extricated from his car. 254 Richard Beere won the re-started race on the road but was docked two places for jumping the re-start and that promoted 935 Nathan Maidment to the win. The Gerry Dommett Memorial Trophy Final was on the wettest track all afternoon for the F2’s. There were several early casualties in crashes that necessitated two complete re-starts. When the race finally did get going properly it was a whittled down field. 156 Paul Lines and 437 Danny Withers were the early leaders but in a race that showed who had the best wet set up, and how to drive it, once again it was all about Bradbury. He hit the front before the halfway stage and from then on simply pulled further and further clear and finished up lapping all up to third place on his way to victory. It was Maidment who was second and 522 Chris Mikulla was third. This was the third year running for Bradbury to win the Dommett Trophy. The Grand National once again saw more incident, including a big coming together on the back straight for Mikulla, 676 Neil Hooper and 102 Willie Dreager. This aided Bradbury’s charge through from the lap handicap and although Rygor made him work hard for it at one stage, 886 was able to pull clear and went on to record a 50 point maximum score.

Just under 50 Rookie Bangers and they had plenty of incident and accident, as is always the case, despite them being the nudge and spin form of the sport. There was plenty of both! 929 Sam Baker came through to win heat one and 41 Sam Hollins heat two. The consolation saw the race come down to a battle between 176 Ben King and 624 Ollie Cope. Just as it looked like the latter had done enough to win, he crashed on the final bend which promoted King back into the lead and the win. The Final was a little more straight forward with Hollins coming through to win by some distance to complete a double of wins. 113 Chris Jeanes was second and 175 Brad Hunt third.

A slightly disappointing eight Hot Rods, with some clearly perturbed by the weather. A mix of racing and track conditions too but the results, much like in the F2 Stock Cars were all about one man as 718 Colin White took a hat-trick of wins. In the second heat 258 James Griggs took some catching and then in the Final it was 125 Mike Hibbert who took some reeling in. But he did, and won by a comfortable margin to take the CWS Mears Trophy. Hibbert was second and 18 Larry Langmead third.