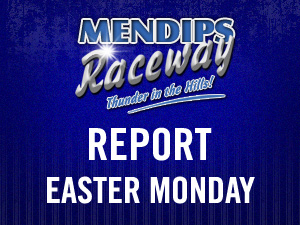 On a dry and very cold and windy afternoon there was Special Rods, Junior Rods, Reliant Robins and Bangers.

In the Special Rods a lot of the top drivers were present and the competition was very stiff. In the first heat there were 13 cars 175 Kev Scammell out dragged 668 Rob Look to get into the lead. By the half way mark 210 Paul Barnes got up to 3rd with 41 Deane Howard in 4th. While they was going through backmarkers Barnes got round the outside of Look then Scammell to get into the lead. D.Howard managed to pass Look on the outside, and with a few laps left D.Howard struggled to pass Scammell on the outside and they crossed the line side by side. Barnes took the win and Scammell was declared 2nd and D.Howard 3rd and 18 R.Colenutt getting 4th from last on the grid. In the second heat there were 14 cars, 3 Simon Harraway out dragged 5 Alan Lettley for the lead, by the half way mark 47 Richard Howard had got upto 3rd place with Harraway in the lead from Lettley. With a few laps left Harraway and Lettley had a coming together, handing the lead to R.Howard. R. Howard was docked 2 places because he started from the front of the Red Grade instead of the star Grade, giving 122 Joe Rowe the win from Lettley then R.Howard. There was 10 Cars out for the Consolation Race. 51 Rob Price took the early lead from second on the grid, then Harraway got round his outside to relive him from the lead and they built up a big lead with 26 Andy Bennet in 3rd then 173 Alan Cambridge managed to get passed Bennet but the lead 2 was too far ahead, Harraway took the win from Price then Cambridge. There was 20 cars in the Final with a lot of Red/Superstar drivers. Scammell took the early lead, and they was a lot of battles going on at the back, and J.Rowe got spat out of the pack onto the infield, and 136 Jason Horseman and Barnes had a coming together, and on the back straight R.Howard got spun towards the fence. R.Price and Lettley was having a good battle near the front until it ended in tears as they was going round backmarkers on the pit bend and they had a coming together leaving Lettley in the wall! Harraway took the win from Scammell then R.Colenutt, from near the back of the grid. 23 Ross Stuckey come home in 6th from last on the grid!

In the Junior Rods some in the crowd was cheering on their favorite drivers all afternoon. There was mainly Minis and a few Novas & Corsas. 700 Ben Brice & 921 Ryan Sparrow had Austin A40’s, and 376 Daniel Kent had a Fiat, and 510 Sid Harrison had a Hillman Imp. In the first Heat which was just blue and White top drivers. With the Blue top starting at the front a lap down. 300 Charlie Ayles got past Brice for the lead and 956 Harry Thompson quickly got into 2nd place from 4th on the grid. Thompson kept trying to look for a way past Ayles but couldn’t find one. Ayles took the win from Thompson then Brice. In the second heat D.Kent got past 101 Jack Martin for the early lead and just before the end of the first lap 87 Callum Richards shot into the lead from 6th on the grid. A few laps later 109 Aaron Holloway Ramsey and 273 Zoe Cambridge had a coming together. C.Richards went onto win from 16 Daniel Milverton then Cambridge. There was 9 cars out for the Consolation Race R.Sparrow went round the outside of 101 Jack Mintram then Kent to take the lead 109 Aaron Holloway Ramsey quickly got into 2nd from 8th on the grid 109 Ramsey found a way past Sparrow for the lead and as they went round the outside of a backmarker Sparrow got passed 109 ?????, then 109 ???? found a way past Sparrow again for the lead. On the last lap Harrison went round the outside of Sparrow, but Sparrow just nipped him to the line. 109 took the win from Sparrow then Harrison. 16 Cars made it out for the Final Kent shot into the lead from pole, a few laps later Brice then Thompson went round the outside of Kent for 1st and 2nd and they built up a big lead. Further back there was a lot of swapping places, then 30 Joe Capel, 39 Sophie Harris and Milverton had a coming together on the pit bend causing a stoppage. On the re-start Brice led from Thompson then Kent then 362 Aaron Loader. Cambridge found a way past Loader then Kent went wide and Cambridge nipped passed. Brice took the win from Thompson then Cambridge.

In the Bangers which was all limos and Hearses the top tin awards went to 270 Slug in a Rover 827 Hearse and 9 Mavis in a Granada Mk2 Hearse and 440 Macauley Mills in a Volvo 740 limo. There was 14 cars out for the first heat Mavis and 920 Simon Sparrow gave a big heave ho going round the first bend scattering the pack with 270 Slug the only one who couldn’t get going again. 107 Dan Chiplen and 88 Tim Wood had a coming together. Just as Chiplen managed to get going again then 252 Boogie decided to park his limo inside the back of his Hearse!! 114 Liam Lake took out Mavis. 54 Tom Davey took the win from 27 Dean Quinn then Lake. 12 cars made it out for the second heat Chiplen then Mavis spun Slug out of the race. Quinn was getting stuck in and 162 Mike Cocks jacked up 363 Sam Trim then 404 Rob Mills piled into the back of them. Quinn took the win from Mills then Boogie. 10 cars made it out for the final Mills and Lake was both pushing Wood before he finally spun out, and Trim jacked up Wood. Then there was a train involving Mavis, Trim, Bugler and R.Mills. After they got going again, Bugler jacked up Mavis, and was followed in by Trim then R.Mills waded in with a massive jacking making a four car train. Lake, Davey and Mills was the only people to finish. 7 cars came out for the All-comers into D/D. Cocks jacked up Trim and was followed in by R.Mills. Quinn went on for the win. In the D/D R.Mills put in a massive hit on Wood. The D/D ended with Lake and Trim playing cat and mouse and 363 S.Trim was declared the winner as he put the most hits in.

There were 16 cars in the first Reliant Robin race 644 Mark Thompson passed 78 Mark Bowskill for the lead 270 Slug was going well until he tried to roll himself on the pit bend. Thompson spun and rolled backmarking 26 Russ Gillingham as he crossed the finish line. Thompson took the win from 78 Bowskill then 445 Niki Loader. There were 15 cars out for the second heat 364 Darren Feltham got put on his side and 144 Wayne Thompson went on his side and skidded along, which caused a stoppage. On the re-start 445 led from 78 Bowskill. On the last lap 78 nipped passed for the lead, and on the last bend Loader pushed 78 wide but 78  just nipped him to the line. There was 15 cars out for the final. 267  rolled on his and skidded along the back straight and ended up back on all 3 wheels!! Loader put his car on his side as he skidded across the line for the win.

We are pleased to bring you the results from Easter Monday 2013: