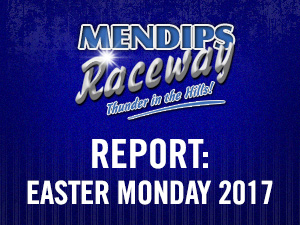 15  Vans turned up for the Banger Vans Ramplins Trophy. All the drivers did a good job of keeping the good size crowd entertained!! There was a good mix of Vans including Ford Transits, LDV’s, Sherpas, and 600 Marcus Chant had an Iveco, and 739 Jason Moore and 284 Noddy had a Merc, and 314 Jason Barraclough had a very smart Sherpa. The Top Tin Awards went to 27 Dean Quinn in a very smart Transit, and 9 Mavis, and 4 Big Bob who both had Bedford CF Camper Vans.

In the 1st Banger Van Heat 502 Kai May and Barraclough had a coming together, then 199 Tom Pearce spun Big Bob out and wrecked his Caravan, then Barraclough spun Mavis out and wrecked his caravan!! There was quite a lot of pushing and quite a few drivers got spun out. Quinn took the win from 440 Macauley Mills then, 329 Kevin Ealson. 15 Vans came out for the 2nd Heat, which started a bit quiet, then Pearce got spun out and was collected head on by Chant, and Quinn was making good progress from near the back until he was shoved into the inner marker tyres, then there was a lot of action and turnstile bend got blocked, and Chant’s van was wrecked!! M.Mills led the re-start for the 1 lap dash Ealson got spun out, and M.Mills went on to take the win from, May, 404 Rob Mills, 437 Cliff Wothington, 281 Sarah Pearce, Mavis, and Ealson the only finishers!! 11 Vans made it out for the Final which was a bit tamer Moore spun Noddy then Moore spun Pearce out, and 54 Tom Davey, Mavis, and Pearce had a coming together, M.Mills took the race win from R.Mills, then Moore, 7 Vans came out for the Allcomers Race Davey and Quinn kept shoving each other wide and swapping places for the lead, then Moore spun Noddy out, then Quinn shoved Davey into S.Pearce, then Quinn shoved Davey into More and Moore spun out. Quinn went on to take the win, from Davey, M.Mills. There was 5 vans left for the D/D at the start Chant stuck his van straight into reverse, and Moore T-Boned Chant. Chant and S.Bevan was getting stuck in! The D/D ended with Chant being the meat in a Mill’s T-Bone Sandwich, then M.Mills pulled out and T-Boned Chant from the other side, and M.Mills was the last van running.

The Special Rods were very competitive with lot of overtaking, with only 17 cars they ran an all in Heats and Final. In the 1st Heat 444 Mark Loader took the early lead from pole, from 6 Tim Bristow, then 612 Dale Brace and 244 Dale Edwards had a coming together and Edwards had to retire, then 7 Will Harraway got spat out of the pack onto the infield, then 224 Jordan Edwards got spat out of the pack into the fence. 720 Dan Latimer was also going well until he had to retire. 85 Andy Pincott made his way up to 2nd from 16th on the grid, on the last lap Pincott tried to go round the outside of Loader but with a parked car on the exit he didn’t have enough room to pass, Loader went on to win from, Pincott, then Brace, then 426 Russell Colenutt.  15 cars came  out for the 2nd Heat Brace took the early lead from pole, and built a ½ a lap lead from Bristow, from 364 Darren Feltham, then Loader, then Loader went round the outside of Feltham for 3rd, then Colenutt went round the outside of Loader, and Bristow for 2nd, then Colenutt set about reeling in Brace, Colenutt managed to catch Brace but couldn’t find a way past. Bristow was leading an 8 car battle for 3rd, 612 went onto win from, Colenutt, then Bristow. 15 cars made it out for the Final Bristow  got very sideways at the start but managed to hang on and dropped into 2nd, giving Feltham the early lead, then there was crash and which scattered the pack, and Pincott and 831 Scania Dave was unable to make the re-start which was led by Feltham, from Bristow, then Brace, Feltham had a tank-slapper and Bristow didn’t need a 2nd invite to take the lead, then 556 Stuart Garland went round Bristow for the lead, then Harraway went round the outside of Garland for the lead, and on the last lap Harraway went wide and Colenutt didn’t need a 2nd invite. 701 Ben Brice and Harraway crossed the line side-by-side. Colenutt took the win from, Brice(from last on the grid), then Harraway. 13 cars came out for the Grand National Colenutt started from pole position but a lap down Feltham took the early lead from pole and Brace got on his outside and they spent a few laps side-by-side before Brace took the lead, then Weare spun out, and Garland led a 5 car battle for 3rd involving Brice, Latimer, Harraway, and Pincott, then Pincott, then Pincott spun out, and Colenutt joined the battle, and on the line Colenutt nipped up the inside of Brice to steel 5th place. Brace went on to win, from Feltham, then Garland

The Junior Rods were running a 2/3rds format with an all in Final. With a lot of competitive racing and a lot of overtaking in all the races. In the 1st heat there was 15 cars 53 Angus Hawkins quickly built a big lead from pole, then 111 Millie Ruby found a way past 8 George Jenkins followed closely by 149 Ieuan Preston then they set about reeling in the leader, further back 88 Charlie Pearce, 285 Jacob Anderson ,and 36 Josh Weare were making good progress from the back of the grid, then 149 Preston went wide and hit the wall, and on the last lap Ruby and Pearce went round the outside of Hawkins to take the lead, Ruby went onto win from, Pearce, then Hawkins, and Anderson from (last on the grid). There was 16 cars out for the 2nd Heat, 190 broke down before the rolling lap so had to be pushed of, 11 Jake Devine outdragged pole-sitter 176 and built up a big lead, 21 Kyan Passco and then 28 Ava Hawkins found a way past 176 Maddie Gambaresi, then 34 Cameron Mc Colm and Weare went round the outside of A.Hawkins and Passco, for 2nd and 3rd, then Weare nipped up the inside of Mc Colm for 2nd.. In the last few laps Ruby clipped the wall, and Weare managed to reel in Devine and Weare got pushed into Devine sending Devine wide, and Weare nipped up his inside to take the lead then onto win. Mc Colm crossed the line 2nd but was docked two places for contact giving 376 Daniel Kent 2nd from, Devine, then Mc Colm. In the 3rd Heat there was 15 cars Devine outdragged pole-sitter Gambaresi followed by Passco, and 26 Leah Bennett, then 730 Taylor Sealy and 35 Charli Johns had a coming together, and then Angus Hawkins spun and was collected head on by 75 Jack Buckingham, Mc Colm then got up to 2nd closely followed  by Pearce, then Devine was blocked by a backmarker Mc Colm, and Pearce nipped up his inside to take the lead, then on the last lap Pearce, and Kent nipped up the inside of Mc Colm to take the lead. Pearce crossed the line 1st but Pearce, Kent, and Mc Colm were all docked places for contact so Devine was given the win, from 854 Jack Sear, then Pearce. 22 cars came out for the Final Bennett took the early lead, and there was a lot of contact going on through the whole field and Ruby got spun out on the turnstile bend then got spun on the pit bend,  then Gumbleton ended up in the wall, and Sear had his front end stoved in!! Bennett lead the re-start from Ava Hawkins, Pearce, and 34 was making good progress, and Pearce was even on the outside going 3 abreast a couple of times, there was still a lot of contact going on and, Preston, Kent, and Devine had a coming together, and 100 Thomas Weeks ended up in the wall in a separate incident then, with 4 laps left, 28 Ava Hawkins had a big tank slapper whilst still in 2nd  and hit the inner tyres and required medical assistance. Bennett led the re-start, from Pearce, then Anderson, Pearce tried to go round the outside of Bennet and Anderson nipped up his inside then switched to the outside to challenge for the lead, then the Red Flags came out as Sealy, and 29 Jasmine Mc Ardle was in the fence in different places and Mc Ardale required medical attention.The race was declared with two laps left as Bennett the winner from Anderson, then Pearce.

Only 11 Robins turned up 510 Sid Harrison took the early lead then Harrison and 108 Adam Headlnd had rollover’s, 24 George Gillingham led the re-start from Feltham, from Quinn, then Weare, then Weare found a way past them to take the lead then onto win from G.Gillingham then Quinn. In the 2nd Heat Headland and 392 Josh sale both spun out trying to roll there Robin’s!! With 1 ½ Laps left Weare got passed G.Gilingham to take the lead, then on the last lap G.Gillingham found a way past Weare to re-take the lead then onto win from Weare, then 26 Russ Gillingham. In the Final Headland spun out then Headland got onto 2 wheel’s then got back on all three!! R.Gilingham went on to win from, Gillingham, Weare.