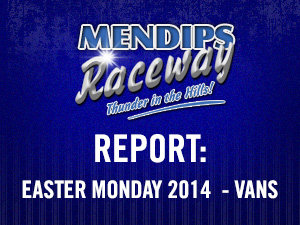 It was a warm and sunny day, with a dry track, and a big crowd for the Van Bangers, Heritage F2, Reliant Robins, and Junior Rods, 266 Micky Ford dressed his Robin up as a Tank under camouflage for the grand Parade. There was 8 Van Bangers with Ford Transit’s, Sherpa’s, and LDV Van’s, which all had very quick pace. 107 Dan Chiplen was in A-Team colours with a horn to match!! 27 Dean Quinn and 270 Slug won the Top Tin Awards.

In the 1st Van Banger race 54 Tom Davey went straight round the outside of 108 Richard Pearce to take the lead, then 270 Slug shoved Pearce wide to take 2nd place. 363 Sam Trim ½ spun Pearce, and 27 Dean Quinn spun 440 Macauley Mills out on the same corner. Quinn was flying and nearly lost it. Davey went on to take the win from Quinn then Slug. In the 2nd race Davey broke down before the start. Trim took the early lead from Mills, Quinn squeezed Slug into the fence, then 189 Jamie Knox spun Slug around, then Slug was Jacked up by Chiplen. Quinn was again flying and spun around and did reverse handbrake turn and a wheel spin and just avoided being Jacked up!! Mills took the win from Trim, then Quinn. Davey got his Van going for the final and Knox took the early lead and Slug got spun out by Trim and Chiplen. Quinn spun and had to do another reverse handbrake turn! Davey quickly got from 5th to 2nd and elbowed his way passed Knox to take the lead, then Knox tried to spin Davey on the next corner but couldn’t make it stick! Davey went onto take the win from Knox then Chiplen. 8 Vans made it out for the All-comers race into a D/D. In the All-comers Chiplen spun out Pearce and Knox, and Davey took the win from 4th on the grid from Quinn , then Mills. In the D/D Chiplen was putting in most of the hits, and Slug and Pearce was in the thick of the action and Pearce took home the biggest wreck! It came down to Chiplen, Davey and Trim. Which Chiplen got the better and Chiplen was the last van left running!

There were 13 Heritage F2 Stock Cars out for their 1st Heat. 616 Darren Clarke put in a big hit on the first corner and there were a lot of other hits going in and 409 Paul Ferguson and 886 Brian Owen got spun. 536 John Ferguson quickly took the early lead from 533 Andy Kaye then Kaye relieved J.Ferguson of the lead and Clarke quickly got up to 2nd and shoved Kaye wide to take the lead and Kaye repaid the complement to re-take the lead and they exchanged places again before Clarke dropped down to 4th. Kaye went onto take the win from 494 James Pratt and 773 Nick Whitney then Clarke. In the 2nd Heat again J.Ferguson took the early lead from 264 Pete Welland then Clarke. Kaye worked his way up to 4th and shoved Clarke into Welland and nipped through on the inside for 2nd, then Kaye reeled in and passed for the lead. Kaye went onto win from Pratt then 763 Andy Bateman. 11 cars made it out for the Final J.Ferguson took the early lead from Welland, then Welland got spun and got collected head on by 218 Phil Hiles. Clarke lead the re-start from J.Ferguson then 59 N.Finnegan, 47 G.Carter, Whitney, Bateman, and Kaye. Whitney quickly got up to 2nd and shoved Clarke wide to take the lead, and Kaye quickly got into 2nd, and Pratt and Bateman were shoving each other wide and swapping places! Whitney took the win from Kaye then Pratt.

There were 11 cars out for the 1st Junior Rod 258 Dean Hughes out dragged pole sitter 190 Ewan Gumbleton for the lead and there was a lot of place swapping further down the order and 225 Joe Edwards ended up on his roof causing a stoppage and a complete re-start!! Hughes again out dragged Gumbleton for the lead from 240 Rachel Bowering then 66 Becky Pearce. Pearce eventually found a way past Bowering then reeled in Gumbleton but couldn't find a way passed. Hughes crossed the line 1st but was taken out of the result due to a technical infringement, giving Gumbleton the win from Pearce then 87 Callum Richards. 8 cars were out for the 2nd heat and 30 Joe Capel quickly built up a big lead from pole from 911 Rhys Burgess-Seabourne then 784 Henry Murray and 224 Jordan Edwards for a while, before Edwards eventually found a way past Murray, with 5 laps to go 300 Charlie Ayles went round the outside of 224 Edwards then Seabourne for 2nd. Then Ayles reeled in Capel and on the last lap he went round the outside of Capel to take the lead and onto win, from Capel then 362 Aaron Loader. Only 5 cars was out for the consolation and 285 Jacob Anderson took the early lead before he slid into the fence and retired, and 62 Beth Stevenson’s car kept stalling so they had to stop the race to get her car off the track. 34 Cameron Mc Colm went onto take the win from 61 Lisa Stevenson then 111 Millie Ruby. 17 cars were out in the Final Bowering took the early lead from pole from Murray then Gumbleton, and there was a lot of swapping places, and Gumbleton, L.Stevenson and Pearce had a coming together, and Jordan Edwards got from 4th to 1st in under a lap and Seabourne got spat out of the pack into the wall causing a stoppage to help him out of the car. Jordan Edwards lead the re-start from Bowering then 700 Ben Brice then Richards. Brice went round the outside of Bowering followed closely by Richards, and Ayles. Brice, Richards, Ayles managed to reel in Jordan Edwards but it was too late to make a move and 2nd to 4th crossed the line nose-to-tail. Jordan Edwards took the win from Brice then Richards, then Ayles

15 Reliant Robins came out for the 1st heat 441 Tom Major took the early lead from 304 Tim Weare and they kept exchanging places, 437 Cliff Worthington had got ½ spun and 266 Micky Ford ended up in his side. Weare went onto take the win from 504 Andrew Worthington , then Major. Ford got the entertainer award. In the 2nd heat 99 Steve Chappell took the early lead from Major, then 270 Slug. Slug then put Major on his roof. Chappell lead the re-start and 154 Joe Odhams managed to get onto two wheels and came back down on all three!! 26 Russ Gillingham then had a massive rollover and ended up parked on the fence causing another stoppage. Chappell lead the re-start from Slug then Weare. On the last lap Weare elbowed his way past Slug for 2nd. Chappell went onto take the win from Weare then Slug, and Gillingham got the entertainer award. In the Final A.Worthington took the early lead from Major . Slug put 154 Odhams onto two wheels but he again came back down on to all three!! A.Worthington nearly rolled himself and Major tried to roll himself! Then Ford put himself onto his side. A.Worthington lead the re-start from Weare then Slug , then Slug got put on his side and got back on all three only for him to tip himself over on his side!! Weare took the win from A.Worthington , and Major. Slug got the entertainer award.