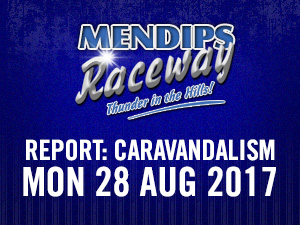 In the Banger Caravans The Top Tin Awards went to 27 Dean Quinn, and 49 Rob Bevan. 384 Scott Benjafield had a Chrysler PT Cruiser towing his Caravan, and 175 Brad Hunt also had a very smart car and caravan.

45 Rookie Bangers turned up with ½ the cars in each Heat. In the 1st Heat 37 George Smith got spun and was collected head on by 284 Noddy, then 894 Chris Stokes and 527 Will Darch had a coming together, and both 595 Ben Wall, and 770 Craig Clark managed to get on to two wheels and come back down on all 4 curtesy of the inner marker tyres, then Smith got punted in to the fence and some others decided to join him later!! 129 Lee Dalton took the win from 83 Ben Styles, then 109 Chris Neville. The 2nd heat got off to a very lively start with a lot of crashes, and 386 Sam Ghey was the first of many to spin, then was a red flag for a stranded driver. Only 12 cars made re-start which was led by 491 Charlie Fullbrook, from 771 Mark Trott the rest of the race was processional until with two laps left a there was a few knocks and two cars got spun including long-time leader Fullbrook, 100 Alec Jenner went on to win from 38 Kevin styles, and 440 Macauley Mills. 20 cars came out for the Consolation Race, amongst the knocks and spins 281 Sarah Pearce got spun and went backwards hard into the marker tyres, 677 John Marshall, and 428 Zak Torode was in the thick of the action!! And there was a four-car pileup on the turnstyle bend, and a 3 car crash on the last lap, Mc Colm took the win from 266 Micky Ford, then 784 Henry Murray. 20 cars qualified for the Final and amongst the action, 701 Ben Brice had a ½ spin and was stuck in the middle of the turnstile bend and later Mc Colm and Ben Wall had a coming together trying to avoid Brice, which triggered a pile up on the start of the home straight with a lot of drivers coming and leaving the party!! Then 784 Henry Murray rolled trying to avoid the pile up and was collected head on by Stokes. Only 10 cars made the re-start which was led by 189 Jamie Knox, then Jenner, and with a lot of action in the last few laps 852 Ryan Hughes took the win from 17 Lee Robbins which were the only two finishers!!

16 Caravans came out for Caravandalism  17 in an action packed race with two stoppages, only 2 Caravans made the distance, and Dean Quinn took the win from Brad Hunt. This made history as Dean has now won the trophy three times in a row! Then 27 celebrated by helping Noddy into a pile up!!

The Special Rods were running a 2/3rds format with an all in Final. There was a lot of close racing and overtaking in all of the races. 14 cars came out for the  1st Heat 224 Jordan Edwards took the early lead from pole and 75 Gary Hunt was quick from 4th to 2nd, then Hunt went round of Edwards for the lead with 45 Tim Seaford closely behind, then Seaford nipped up the inside of Hunt to take the lead, 612 Dale Brace spun out, and 7 Will Harraway worked his way up from 6th to 2nd and Harraway had several attempts  of going round the outside of Seaford doing a few laps side-by-side but couldn’t make it stick, and with a few laps left Harraway boxed Seaford in with a backmarker to go round the outside of Seaford to take the lead then onto win with 426 Russell Colenutt coming home in 3rd (from last on the grid). 12 cars came out for the 2nd Heat 831 Scania Dave led from pole and built a big gap from 81 Andy Hawkins then Seaford, then 6 Tim Bristow, and Harraway was again flying and quickly got from 9th to 5th, then 720 Dan Latimer and 993 Darren Foss had a coming together, then Harraway, 304 Tim Weare, 41 Dene Howard, and Colenutt all went around the outside of Bristow for 4th, 5th, ect. Dave went onto win from Hawkins then, Seaford. 13 cars came out for the 3rd heat Edwards took the early lead from pole, Dave passed 50 Billy Garrett then Dave tried to go around the outside of Edwards and after about a lap side-by-side Dave passed Edwards for the lead closely followed by Hawkins. Then Edwards was ahead of a 4 car battle for 3rd which Brace eventually got to the front then there was another battle for 3rd with Brace, 43 Andy Howard, Latimer, D.Howard, and 701 Ben Brice, then D.Howard and Brice crashed and both retired. Dave went on to win from Hawkins , then Brace. 19 cars came out for the Final Edwards took the early lead from pole, and Hawkins was quick from 4th to 2nd then went round the outside of Edwards to take the lead, then 46 Angie Harris spun in the middle of the turnstyle bend scattering the pack, the Seaford, A.Howard, and Brace had a coming together causing a stoppage Hawkins led the re-start from Bristow, Harraway, Harraway went round the outside of Bristow for 2nd followed by, Brice(from 17th in the grid), Colenutt(from last on the grid), and Latimer (from 16th on the grid). Hawkins went on to win from, Harraway then, Brice.

In the Hot Rods 12 cars turned up, with the grid positions for the 1st race out of the hat with a reverse grid for the 2nd race with the highest point scorers from both races starting at the front for the Final. In the 1st Heat 17 Paul Tossell broke down before the start, 117 Dave Tossell led from pole and 536 Jeff Johnson tried to go round the outside of D.Tossell and after a few laps side-by-side but Johnson couldn’t make it stick and got stuck on the outside and dropped down the order, then 258 James Griggs tried to go round the outside of D.Tossell but after a few laps side by side he couldn’t make it stick either and also got stuck on the outside, then 35 Neil Muddle had a half spin in the middle of the turnstyle bend and got stuck  causing a yellow flag to get Muddle to safety, then D.Tossell spun in front of 788 Mark Shelper, and 718 Colin White didn’t need a 2nd invite to nipped passed both of them, and Muddle rejoined the race then there was a Red Flag. White led the restart from Johnson. 49 Maurice Cole retired, and 57 Graham Taylor’s car went sick. White (from 6th on the grid) went on to win from Johnson, then Shelper(from 5th on the grid), then  611 Jamie Bryant(from 7th on the grid). In the 2nd Heat P.Tossell and 926 Alistair Murray opted to start at the back of the grid, 282 Steve Hunt went round the outside of Cole for the lead and Hunt built up a gap to 2nd Muddle had a half spin, and White and Bryant got up to 2nd and 3rd and set about reeling in Hunt, and with 3 laps left, White caught Hunt and whilst they was going through the backmarkers White out foxed Hunt and took the lead then on to win, from Hunt, then Bryant. In the Final White led from pole from, Bryant then Shelper, then Hunt, later in the race there was a crash on the exit of the turnstile bend, and Cole, and Muddle, and Johnson, had too much damage to make the re-start, then P.Tossell retired, White led the re-start from Bryant, and Hunt nipped straight round the outside of Shelper to take 3rd, then Shelper had to retire with the rear passenger side wheel arch rubbing on the tyre. White went on to win from Bryant then Hunt.

14 Robins turned up in the 1st race Mc Colm, and 135 Jack Mintram, and 100 Jerry Weeks got put on their roof, and 3 Dan Tytheridge and J.Quinn got put on their side, and Weare put himself on his roof then back on to all 3!! Then Weeks and Mc Colm had complete rollovers, 26 Russ Gillingham led the last re-start from 58 Martin Dalton, then Tytheridge, and Tytheridge got past Dalton then R.Gillingham to take the lead, and on the last lap Dalton nipped up the inside of Tytheridge and Dalton just pipped Tytheridge to the post to take the win with Weare in 3rd and R.Gillingham in 4th. The Entertainer Award went to Weeks. The 2nd Heat was a ramp race and 25 Kylie Gillingham rolled, and Weeks spun Tytheridge and put him on his side, R.Gillingham went on to win from Dalton, then Weare, and K Gillingham took the Entertainer Award. The 3rd Heat was a Figure of 8 race, into a D/D, there was quite a lot of near misses on the crossover but no one made contact. 108 Adam Headland, Mc Colm, and 119 Stacey Howe got put on their side, R.Gillingham went on to win from, Weeks, then Tytheridge. The last two left running was Headland and Weare then Headland broke down giving Weare the win