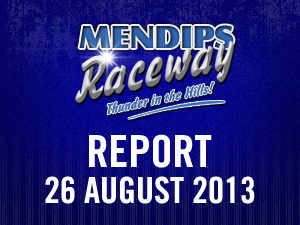 There were 15 Cars out for the 1st Special Rod Heat 47 Richard Howard retied before the start of the race, 720 Dan Latimer lead from pole from 6 Andy Wadley then 386 Adam Ghey, and the three of them built up a big lead then Ghey spun out of the race. Later 35 Mark Johns and 46 Angie Harris had to retire. There was a six car battle for 4th eventually 18 Russ Colenutt and 41 Dene Howard managed to get to the front of them with 2 laps to go. Latimer went onto take the win from Wadley then 364 Darren Feltham then Colenutt from last on the grid. There were 14 cars out for the 2nd heat 8 Andy Russell outdragged pole sitter 668 Rob Look for the lead who was followed by 370 Steven Baker. 136 Jason Horseman was soon into 4th then Horseman went round the outside of R.Look to relieve him of 3rd. 51 Rob Price had a spin and was collected by Will Harraway and 700 Les Brice, then 173 Allan Cambridge was black flagged because his exhaust was hanging off!! 210 Paul Barnes was going well and got up to 4th but the first three cars was too far ahead to catch. Russell went on to take the win from Baker then Horseman then Barnes who just caught them with one lap to go. There were 12 cars out for the consolation 7 Will Harraway took the early lead from pole from Ghey then 26 Andy Bennett got passed Wadley for 3rd followed by 993 Darren Foss. R. Howard had to pass Cambridge twice and on one occasion it was three abreast with Harris on the inside and R.Howard on the outside!! By the half way mark R.Howard had got from 12th to 5th and within two laps he managed to go round the lead four to take the lead then on to win from Harraway then Ghey. On the last lap Price, 4 Brian Roper and Cambridge had a coming together. There were 21 cars out for the final Harraway out dragged pole sitter R.Look for the lead Baker managed to work his way up from 6th to the lead overtaking them all round the outside!! 23 Ross Stuckey spun as he was trying to work his way up from the back, Wadley had a spin and was stranded on the corner causing a stoppage. Baker was in the lead but broke down before the re-start handing the lead to Colenutt who started 19th on the grid from 458 Tony Bevan then Barnes. Coming into the last corner R.Howard got on the outside of Bevan and they crossed the line side by side and R.Howard just pipped Bevan to the post. Colenutt went onto win from Barnes then 122 Joe Rowe from D.Howard from R.Howard from 20th on the grid!!

When the scores were calculated, the Summer Series awards were made to Steven Baker (370) White tops, Jason Horseman(136) Blue tops, Paul Barnes (210) Red tops, and there was a joint win for Howard and Colenutt for the Superstar prize!

There were 7 Cars out for the 1st Hot Rod Race 55 Alistair Lowe led from pole and 18 Larry Langmead found a way past 788 Mark Shelper to relive him of 2nd place and 205 Mike Norton found a way passed 578 Rick Lee then Shelper to get into 3rd. 282 Steve Hunt and 718 Colin White found a way past Lee and Shelper. Just after the half way mark White managed to get on the outside of Hunt and they spent a few laps side by side before White managed to get passed. Then White got on the outside of Norton with Hunt closely behind waiting for a mistake! After a few laps White managed to get passed Norton. Lowe went on to win from Langmead then White. In the 2nd race pole sitter disappeared in to the lead and Langmead got round the outside of Lee to relive him of second place. Hunt closely followed by White got up the inside off Lowe then they both quickly flicked to the outside to go round Shelper. Just after the half way mark White managed to find a way up the inside of Hunt for 3rd. White set about reeling in Langmead and caught him on the last lap and tried to go round the outside but White was too far back. Norton went onto the win from Langmead then White then Hunt. 7 cars also made it out for the Final Langmead disappeared into the lead from pole White was closely followed by Hunt and the both of them managed to get round the outside of Lowe. Then White got on the outside of Norton and took about a lap to get passed, then Hunt also got on the outside of off Norton and took him about a lap to get passed! White and Hunt then set about reeling in Langmead and they both managed to catch Langmead and pass him on the inside. White went onto win and the track championship and celebrated with some doughnuts with Hunt 2nd from Langmead.

There was a good mix of cars in the Rookie Bangers including Vauxhall Cavaliers, Ford Mondeos, Honda Civic and Mk 3 Escorts and 502 Kai May had a Ford Puma. There were about 24 cars out for the 1st Rookie Banger Heat 668 Paul Mortimer lead from pole and there was an early stoppage for a stranded car who was ok. There was a few scrapes and spinners, and 266 Micky Ford got spun and was collected head on by 301 Fred Moore. 778 Paul May had the save of the day as they tried to spin him both ways and he survived!! Moore was in front of a six car train and ended in the fence as they went round a stranded car. Mortimer went onto win from 181 Andy Churchill. There were about 22 cars out for the 2nd heat 209 Russ Neville led from pole 185 Matt Anderson got spun out, then 911 James Chapman got spun out and when he was reversing along the straight he got collected head on by another car which caused a stoppage. Neville lead the re-start from 34 Scott Gray then 328 Chris Parry. 718 Adie(Wiggy) Brown was near the front of another train and spun Anderson and 75 Paul Fisher both out the same time leaving Wiggy’s car wrecked!! 244 Ian Frampton went onto win from Neville then 384 Scott Benjafield. There were about 15 cars out for the Consolation Race including Wiggy who managed to repair his car. Gray got passed C.Parry for the early lead, and 47 Ross Edwards, Moore and 744 Jake Carless had a coming together! Fisher pushed Gray out of the lead. Fisher went onto win from 744 J.Carless then 550 Gary Bowers. There was about 24 cars out for the final 220 Mike Stephens got spun out twice before he got stuck in front of a four car train and ended up in the wall!! There were a few other spinners and crashes Churchill was holding on well till he finally got turned out going into the pit bend! Fisher was going well from the back. Mortimer went onto win from 775 Brad Hunt 444 Keiron Bellringer. There were 14 cars out for the Banger Caravan Race within the first lap there was carnage on the turnstile corner and the track was blocked causing a stoppage! Not long after the re-start the turnstile corner was blocked again!! causing another stoppage. Quite a few cars made the re-start and the D/D came down to 27 Dean Quinn and 162 M.Cocks(with four flat tyres). Cocks took the win and when he got out the crowd gave him a big round of applause!!

There were about 21 cars out for the first Reliant Robin Race.  445 Niki Loader, and 267 Luke Baber, 437 Cliff Worthington had a coming together! 674 Matt Ashmore had a got put on his side causing a stoppage, after the re-start N.Loader put his car on its roof. 499 Lee Charles took the win from 644 Mark Thompson then  444 Mark Loader, and 162 Mike Cocks got the entertainer award. There were about 22 cars out for the 2nd race there was a few ½ rolls and 266 Micky Ford had big rollover. N.Loader took the win from L.Charles then M. Loader, and Ashmore took the entertainer award. 16 cars came out for the Figure of 8 Race There were a couple of driver who was braking for the crossover, and Cocks and 304 Tim Weare was making a extra special effort to make contact. There was a few ½ and full rolls mostly by 119 Stacey Howe. M.Cocks and Weare had a coming together on the crossover. 364 Darren Feltham and 2 Raoul Loader and M.Ford had a big coming together on the crossover causing Ford to roll!! Ashmore and M.Loader had a double rollover!! 100 Jerry Weeks took the win. 6 cars made it for the D/D 444 M.Loader tried to T-Bone 26 Russell Gillingham and just missed, and it ended with Gillingham and N.Loader having a head on and N.Loader was the only one left running!