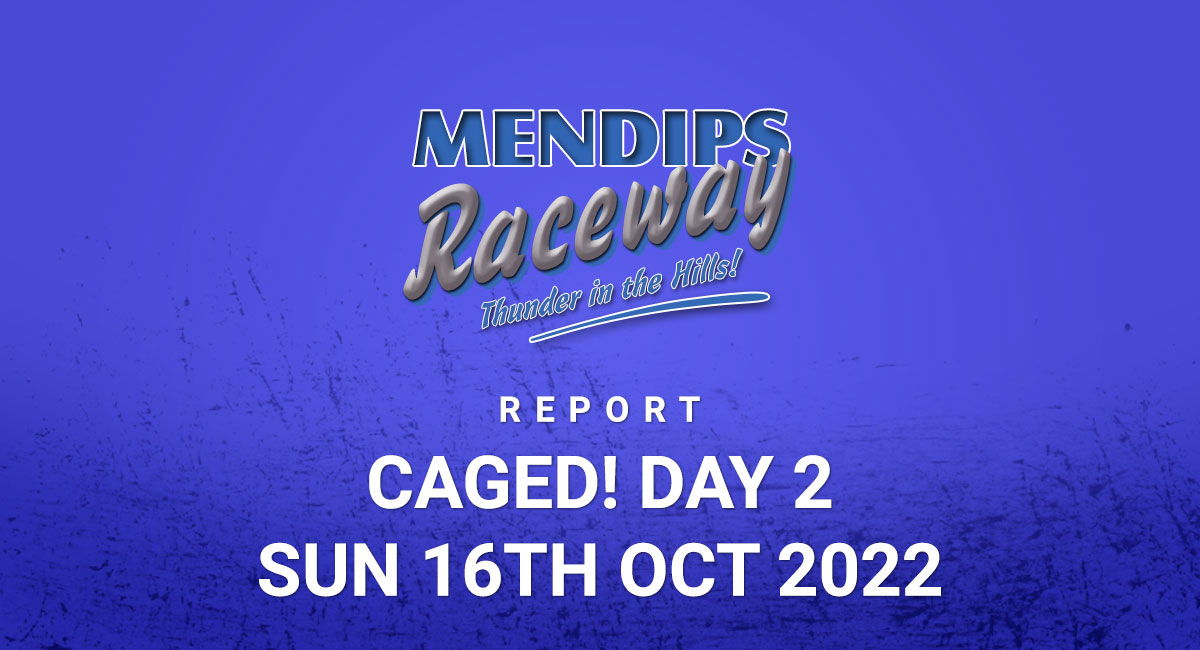 The weather remained dry for most of the meeting and the rain swept in for the last 3 races which was the V8 Hot Stox Grand National, 2l Bangers Allcomers into D/D, B2B Banger All comers in to D/D.

The V8 Hot Stox was having some good scraps throughout the grid with plenty of bumper work, in all of the races 16 Cars came out for the 1st Heat 82 Joe Cheetham took the early lead from pole before 117 Rob Scriven shoved his way past for the lead, and 222 Guy Jolly retired, and 1 Kev Stuchbury spun 66 Mark Holmes out when he was working his way up from the back of the grid, then 262 Camey Dorrell made her way up from 8th on the grid to shove Scriven wide to take the lead then 96 Jamie Winter’s car went out in a cloud of smoke!! Dorrell went on to win from 69 Matt Barnard, then 485 Steve Thompson (from 15th on the grid), then Stuchbury.

Jolly retired at the start of the race, and Scriven took the early lead then Dorrell shoved Scriven wide for the lead, then Thompson shoved Scriven into Dorrell to take the lead, then Dorrell shoved S.Thompson wide to re-take the lead and there was a stoppage, as Barnard and 490 Craig Thompson had a big coming together, Dorrell led the re-start from S.Thompson then Stuchbury, and on the last bend 176 Stephen Young shoved Stuchbury wide and nipped up his inside and they crossed the line side by-side , Dorrell went on to win from S.Thompson, then Stuchbury, then Young.

13 cars survived for the Final Scriven took the early lead with Barnard quick from 5th up to 2nd, further back Dorrell was getting roughed up and lost a few places , and Holmes got spat out of the pack and clattered the fence, then Thompson made it up to 3rd, then S.Thompson shoved Barnard wide for 2nd then S.Thompson shoved Scriven wide to take the lead and with 5 to go Dorrell shoved Stuchbury wide to take 3rd but the lead two was too far ahead to catch. S.Thompson went on to win from Barnard, then Dorrell, then Stuchbury.

12 cars made it out for a very wet Grand National, and 146 Grant Leather spun out and 42 Rob Barber took the early lead before 10 Gilen Bullock took up the running, then Barnard shoved his way past for the lead and Stuchbury spun Barber out of 3rd, Barnard went onto win from Bullock, then Stuchbury.

12 cars came out for the 1st Heat and 677 Warren Darby, and 28 Ian Govier retired, and 10 Frank Little took the early lead from 177 Chris Masters, and Masters held on to 2nd for a long time until 277 Jack Grandon cannoned 799 Joe Powell into Masters and Masters spun out and Grandon nipped past to take 2nd, then on the last bend 902 Buster Junior fired Grandon wide to take 2nd Little went on to win from Buster, then Grandon.

Masters took the early lead from Little and led for a while and Darby got up to 3rd with Grandon closely behind, then Darby shoved Little wide for 2nd then Darby shoved Masters wide for the lead, then on the last bend Buster spun Grandon out of 2nd, and Grandon shoved it in reverse and reversed his car across the finish line and Grandon came home 7th!! Darby went on to win from Buster, then Masters.

11 cars survived for the Final 28 Ian Govier took the early lead and Little made it up from 5th to relive Govier of the lead, then Darby made it to 2nd from the back of the grid and Darby shoved Little wide to take the lead, further back Buster spun Grandon out, then a lap later 720 Archie Brown shoved past Buster, then Grandon picked up Buster and gave buster a massive follow in which also trapped 261 ???. Then Grandon retired with damage. Darby went on to win from Brown, then Buster.

25 cars came out for the 1st Heat and only 9 cars made the distance and amongst the action 58 Paul Rubery got turned around and was collected head on, and 720 Kenny-Joe Gabriel jacked up 616 Ian Jones, and 908 David Brown jacked up Reynolds, then there was a stoppage, and 743 Jake Bond led the re-start, and 852 Ryan Hughes was giving 205 Alex Ganter a lot of attention then 440 Macauley Mills latched on to the back of them and Ganter spun out, then later Ganter spun 305 Mark Penfold out. Bond went on to win from 252 Boogie, then 956 Harry Thompson.

19 cars came out for the 2nd Heat and amongst the action Gabriel jacked up 6 Troy Jones, and 76 Matt Hodgkins and 02 Ash Reynolds had a Head -on triggering a lot of action on the turnstile bend, 252 Boogie led the re-start, and Ganter reversed and pinned 410 Dan Galley to the fence as he was passing by, then Gabriel jacked up Galley! And 961 Brad Deeprose jacked up Ganter, only 8 cars made the distance, with Boogie taking the win from, 133 Terry Hill, then Bond.

14 cars survived for the Final with a 3 car jacking train going into the fence on the 1st bend, then another driver decided to join the party!! 714 Paul Smaldon went on to win from Hill, then Roona.

2L BANGER ALLCOMERS INTO A D/D

Only 7 cars made it out for the Allcomers race which was won by Terry Hill, and the D/D ended by Boogie jacking up 781 Blake Dudley and Boogie was declared the winner.

26 cars came out for the LCQ with a few drivers that couldn’t make it for the qualifying Heats on the Saturday. Amongst the action 154 Joe Odhams got turned around trigering action on the turnstile bend, and there was a stoppage, to see to a driver who was ok, and 49 Ash Harvey was disqualified as his bonnet was hanging off!! 29 Jamie Jones led the re-start, and 385 ben Rice got turned around and was collected head on by Odhams, then there was another stoppage, only 6 cars made the re-start, which was led by Jones, then a couple of cars got spun out, and Jones went on to win from 200 Brian Pugsley, then 17 Adam Welsman. Then Welsman’s car had a small fire!!

746 Deejay Tyler took the early lead from 852 Ryan Hughes, then 797 Scott Clarke, then Clarke passed Hughes for 2nd, then 129 Lee Dalton passed Clarke for 2nd, and Clarke was getting very sideways in his people carrier and Hughes got passed Clarke and amongst the action 3 cars had a coming together, and 160 Jamie Warr spun out. Tyler went on to win from Dalton, Hughes, then Clarke.

B2B ALLCOMERS INTO A D/D

27 Cars made it out for the allcomers race and amongst the action there was a stoppage for 61 Beth Stevenson, Clarke led the re-start then a 3 car train went int the turnstile bend and there was a pile emerging on the turnstile bend which Clarke just managed to get through but on the next lap Welsman shoved Clarke into the pile up!! Then there was a stoppage and 10 cars made the re-start led by Ross, and 137 Zoe Williams spun 23 Clive Crockford, and 71 Zak Peters and 404 Rob Mills was having some fun and games!! Tyler took the win from Crockford, then Peters, then R.Mills the only finishers!! The D/D was null and voided as a driver needed medical assistance.