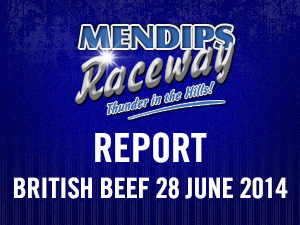 The heavy rain in the afternoon cleared up before the 1st race but left the track very greasy. Although the rain threatened it held of until the last 2 races. All the Bangers was very well presented and there was Ford Capris, Cortinas, Sierras hatchbacks and Estates, and a Cortina Estate. The top Tin awards went to 38 Craig Allan, 130 Dan Cook, 475 Ben Sealey, and 502 Kai May.

The 1st race for the Bangers was British Beef Final with about 25 cars. There were cars crashing and going all directions from the start with a small pile up on the on the bend and 146 Steve Voss went steaming in!! in a battle for the places 162 Brett Ellacott and 240 Rob Setters both went hard into the inner armco side-by-side!! 67 Ricky Beasley took the win from 77 Paxti Beasley then 38 Craig Allen, then, 452 lurch, 190 Steve Bailey, 27 Dean Quinn the only finishers! 20 cars made it out for the 2nd race after a lively start the race quietened down a bit. There was a 7 car pile up on the 1st bend, 270 Slug took 314 Jason Barraclough for a wild ride around the plating!

Then Barraclough tried to pay him back but couldn't make it stick, then P.Beasley spun Slug, 107 Dan Chiplen then planted 54 Tom Davey into the plating. On the last lap Chiplens's car caught fire resulting in a stoppage and the race was declared with Bailey the winner from 888 Donny Lane, then P.Beasley, then Lurch, the only finishers!!

There were 11 cars in the Allcomers with 3 cars waiting for the D/D 176 Ben King and 323 Dean Kelly had a coming together in the pit bend and 961 James Pidgeley went steaming in and Ellacott jacked up Pidgeley, then Ellacott backed out and gave Allan a big jacking on the home straight. Bailey waited on the turnstile bend to try and take out P.Beasley but he just missed and P.Beasley took the win from 252 Boogie. In the D/D, D Lane was the filling in the sandwich between 121 Mike Emery and Bailey. Bailey took the Win.

There was a good entry of 12 Hot Rods with 82 Keith Richens visiting from Northampton. All the races was very close with lots of battles and overtaking all through the grid. In The 1st Heat 17 Paul Tossell retired on the warm up lap, 18 Larry Langmead lead from pole closely followed by 205 Mike Norton and built up a bit of a gap from 788 Mark Shelper.

223 Sean Porter found a way past 35 Neil Muddle for 4th, 718 Colin White quickly got up from 10th to 5th, White then found away past Porter then Shelper, and set about reeling in Norton. White caught Norton and Langmead, and when they caught some backmarkers White went round the outside of Norton then Langmead to take the lead at the 1/2 way mark. White went onto win from Langmead then Norton. In The 2nd heat 258 James Griggs took the early lead from 117 Dave Tossell then Porter, 125 Mike Hibberd found a way past Muddle for 4th.

P.Tossell's car sounded sick again and slowed down and Hibberd and Porter went round the outside of him going 3 abreast!! With Hibberd passing them both through the middle!! Hibberd then managed to pass D.Tossell then Griggs round the outside to take the lead. Norton worked his way up from 7th to 4th, and White worked his way up to 5th from 10th, White then went round the outside of Norton then D.Tossell for 3rd, with Norton closely behind White managed to catch Griggs but struggled to find a way passed, and on the last lap White got on the outside of Griggs and they crossed the line side-by-side. Hibberd took the win and White was declared in 2nd with Griggs 3rd from Norton. Just as the Hot Rods were coming out for their Final it stated to rain making the track even more greasy and even White had a 1/2 spin on the warm up lap!! Griggs found a way passed Muddle for 3rd, then 578 Rick Lee, and Griggs managed to pass Richens for the lead.
Langmead went round the outside of Tossell and Porter then Langmead slid wide into the plating! White managed to work his way up from 11th to 5th, then had a 1/2 spin. Hibberd worked his way up from 6th to relieve Lee of the lead and Porter managed to get from 7th to 3rd, then Lee and Porter both spun and crashed into each other! Hibberd went onto take the win from Norton(from 10th on the grid), then Griggs, then Lee then, White.

There were only 6 Brisca Heritage 1950’s Stock Cars with 3 Mike Shirley starting every race on pole position but a lap down because he had a more modern Heritage car. 146 Roy Clarke out dragged pole sitter 21 Robin Izzard to take the early lead and a few laps later 144 Tony Clarke went round the outside of Izzard to relieve him of 2nd place Shirley was flying from the back getting his Ellis Ford Replica very sideways!! Shirley managed to get up to 3rd but couldn’t find a way past T.Clarke. R.Clarke took the win from T.Clarke, Shirley, Izzard, 42 Keith Barber, 161 Garry Greenway.

The race was declared as Izzard the winner from T.Clarke, Shirley, R.Clarke. In the Final Izzard outdragged pole sitter Barber to take the lead, R.Clarke had a spin, and T.Clarke found away past Barber to relive him of 2nd place, Shirley was again flying and getting very sideways!

On the last lap Shirley got up to 3rd put it was too late to make a move. Izzard went on to win from T.Clarke, then Shirley.

18 cars made it out for the 2nd Heat A.Worthington put Weare into a ½ roll. 53 Oldhams rode the wall but still managed to get back onto all three!! 25 Kylie Gillingham had a very big roll sliding into the plating hitting her roof on the plating resulting in a stoppage but she was ok. A.Worthington lead the re-start 333 Tom Mansell got put on his side, and A.Worthington went onto win from 445 Niki Loader then Tytheridge The Entertainer award went to K.Gillingham then Oldhams.
17 cars made it out for the Final Tytheridge had a big rollover and Howe ended up on her side had resulting in a stoppage. Weare lea the re-start from N.Loader ,then 99 Steve Chappell. C.Worthington had a ½ roll and Major put himself on his roof. A.Worthington got black flagged, and Charles spun Slug backwards into the fence resulting in another stoppage. Weare lead the re-start from N.Loader.

144 Wayne Thompson ended up on his side and 26 Russell Gillingham had a massive rollover ending up on his roof. N.Loader took the win from Weare, then Chappell. The Entertainer award went to Dan Tytheridge