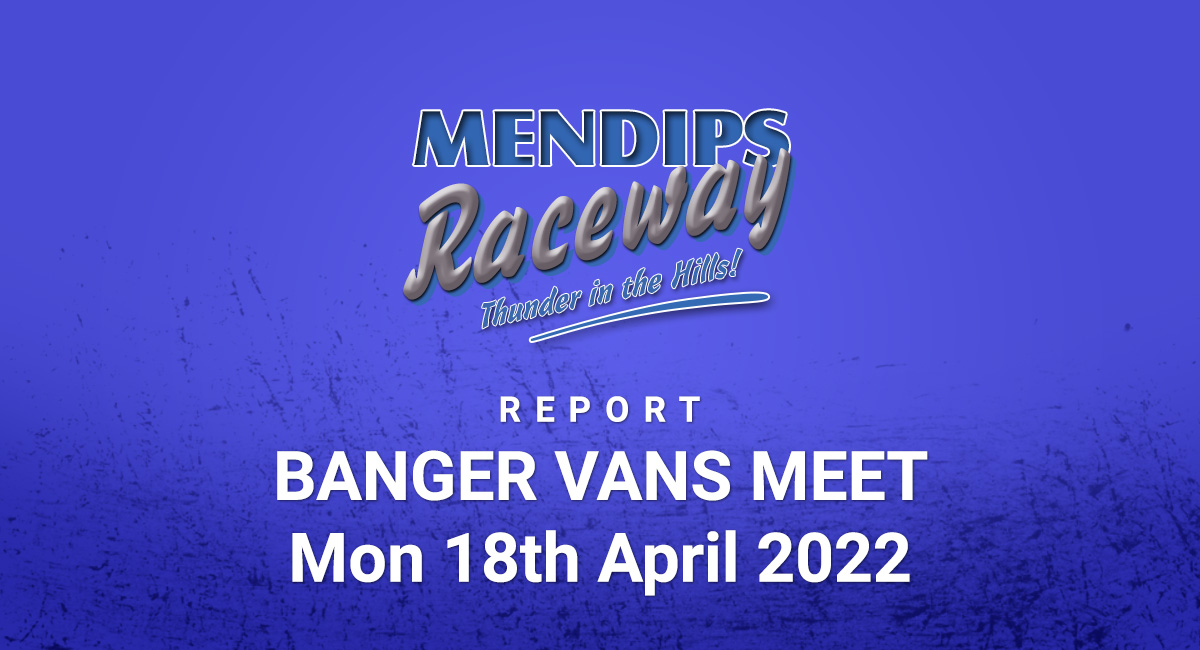 The meeting started off dry until the start of the 2nd Heat and it was on and off light showers the rest of the afternoon giving some very changeable track conditions!!

19 Van Bangers and they was split into two separate Heats with an all in Final. There was a good mix of vans most drivers had Ford Transit’s, 87 Jason Harvey had a Transit horse Box, there was some LDV’s, Iveco’s, and Renault Master’s, and 600 Marcus Chant had a big, long wheel base Iveco Mini bus, and 404 Rob Mills had a Big American Campa Van!!

221 John Pee wee-Paul was doing some great drifting, and when he was drifting, 440 Macaualey Mills nipped up his inside to take the lead then onto win.

18 Vans survived for an action-packed Final with a lot of big hits going in!! Amongst the action Chant gave someone a massive T-Bone, then there was a stoppage to clear the blocked track, 106 Lois Cartridge led the re-start, amongst the action 154 Joe Odhams spun R.Mills, then J.Harvey jacked up Odhams, and Stokes spun 111 Tommo, then Tommo Jacked up Mill’s CAMPER VAN and all 4 wheels of Tommo’s LDV left the ground!! Cartridge went on to take the win from Pee-Wee Paul, then Jeanes.

VAN BANGER ALLCOMERS INTO A D/D

The Special Rods was running a 2/3rds Format. There was a lot of close actions with good battles throughout the grid and with the stiff competition the star graders was struggling to get to the front in all of the races.

19 cars came out for the 1st race 44 Sam Howard ended up in the inner markers on the 1st lap and 35 Mark Johns led for a lot of laps from 2nd on the grid until he had a tank slapper and when he tried to recover 768 Joe Delahay went round his outside to take the lead, then 135 Jim Cannon made it up from 5th on the grid and went round the outside of Delahay, with 68 Pete Jennings tucked in behind Delahay and after a few laps side -by-side Cannon managed to take the lead, then 701 Ben Brice ended up in the wall, Cannon led the re-start from Delahay. Then 68 Pete Jennings, then 181 Ian Mclaren and 175 Kevin Oliver had a coming together, then Delahay retired with front end damage, then 517 Scott Weldon spun in front of 43 Andy Howard across the finish line. Cannon went on to take the win from 68 Pete Jennings, then Weldon, then A.Howard.

16 cars made it out for the 3rd Heat, 41 retired, and Delahay, took the lead from 3rd on the grid, then Cannon made it from 4th on the grid and went round the outside of Delahay and they spent a few laps side-by-side before Cannon took the lead, Cannon went onto win from Delahay, then 120 Andy Latimer (from 8th on the grid), 700 Les Brice, B.Brice, 303 Jason Oliver came home 6th 7th and 8th from the star grade.

24 cars came out for the Final 35 took the early lead from pole, then Cannon made up to 3rd from 8th and on the grid, then Cannon went round the outside of Stanley, then 35 Mark Johns to take the lead with 68 Pete Jennings closely behind, then Jennings spun in front of S.Howard, then McLaren and 275 Jack Buckingham retired with damage, then S.Howard tried going round the outside of Cannon and as they was side-by-side going round the pit bend it looked like they accidently rubbed which sent S.Howard into the wall, and S.Howard’s car received a lot of front end damage. Cannon led the re-start and went on to win from Weldon then, 278 Andrew Bressingham, and B.Brice was the 1st star man home in 8th, with L.Brice in 9th.

The Junior Rods was also running a 2/3rds format. 13 cars came out for the 1st Heat and 301 John Penfold took the early lead from 2nd on the grid, before 610 Alfie Murray took the lead, then Penfold ½ spun, and 69 Reece Welch-Fry took 2nd, and A.Murray and Reece built up a big lead, and with 3 to 311 Lewis Allen made it up to 3rd from last on the grid, then Allen set about reeling in the leaders and Allen managed to catch and pass Reece round the outside, A.Murray went on to take the win from Allen, then Reece.

12 Cars came out for the 2nd Heat 30 Finlay Holloway took the early lead and 924 Joshua Heathcote tried to go round his outside then J.Heathcote slid wide then Reece tried to go round the outside of Holloway and they spent a few laps side-by-side before Reece got his nose ahead and he drifted sideways but he just managed to hang on to take the lead, 210 Ryan Brooks was quick up from the blue grade to take 3rd. Holloway and Brooks crossed the line side-by-side but Holloway just had his nose ahead, Reece took the win from Holloway, then Brooks.

15 Cars came out for the 3rd Heat 428 Ellie Murray broke down on the rolling lap, and 14 Macca Loader took the early lead from pole then A.Murray went round the outside of Loader for the lead, then 856 Jamie Cocks made it from 8th to 2nd, then Cocks went round the outside of A.Murray for the lead, on the last lap 28 Jake Ralfs got on the outside of 26 Harry Melville and they crossed the line side-by-side, Cocks crossed the line 1st but was docked two places for a jump start. giving A.Muray the win from Melville (from last on the grid), then Cocks. Brooks was also docked two places for a jump start.

17 Cars came out for the Final Reece took the early lead from 3rd on the grid, then Cocks made it up from 8th on the grid to go round the outside of Reece to take the lead, in the battle pack A.Murray got squeezed into the wall, and Allen got tagged but managed to hang on. Cocks went on to take the win, from Reece, then Melville (from last on the grid).

8 Robins came out, and 154 Joe Odhams managed to get onto two wheels, and a complete rollover, and also put his Robin onto his Roof, and 32 Lenny Loader, and 30 Joe Capel both went down the straight on their side and back to all 3!! ( on separate occasions) 518 Matt Capel went on to take the win.

10 Robins came out, Loader put his Robin on its side, and also on his roof, and Odhams nearly rolled but was up righted by the fence!! Then Odhams had a big Rollover and the race was declared, as M.Capel the winner.