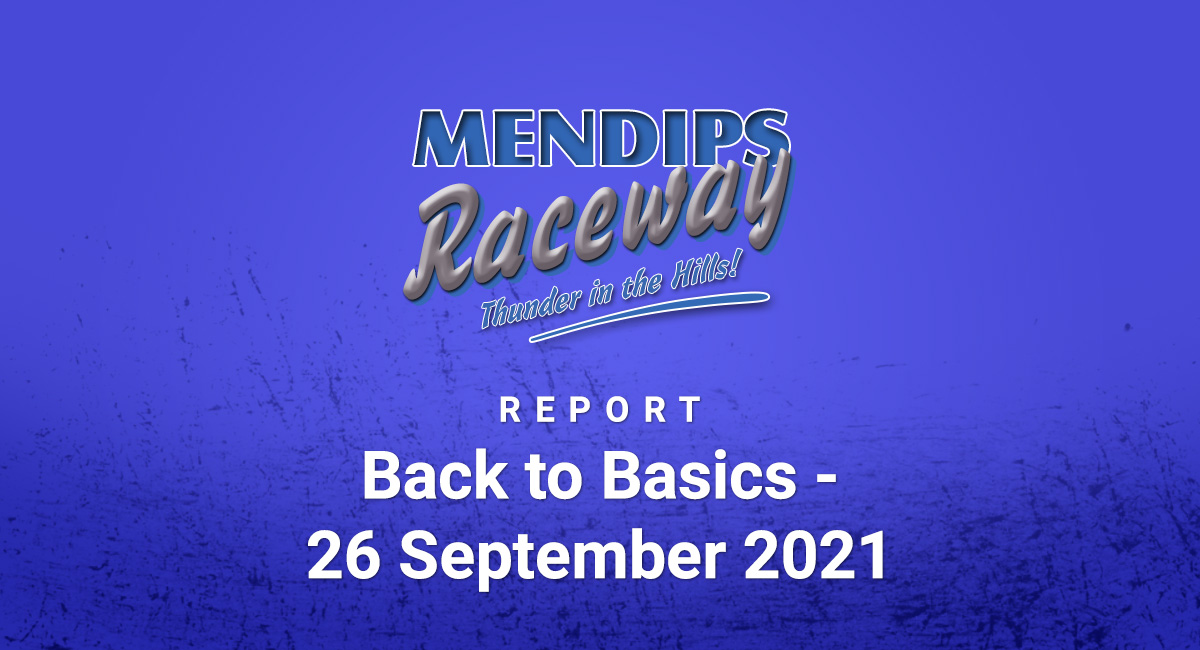 Today’s meeting is looking good with a dry afternoon forecast. The Saloons are ready for the first and only meeting here at Mendips Raceway, this year.

Mendips has a good turnout for the Back to Basics with 42 turning up. They got split into two heats as there was so many raring to stretch their rubber on the tarmac.

Looking down the pits you had a good selection of cars, including the usual suspects of Ford Ka’s, Fiesta’s, Corsa’s, Renault Clios, Vauxhall Astra’s and a Ford Puma. These are the bread and butter of the basics, however there were some unusuals including 595 Ben Wall having a Peugeot 1007, and 771 Mark Trott came to the track with a Toyota Celica.

Back to Basics Bangers 1st Heat

Proceedings got underway with the 1st heat of the Back to Basics and most of the action straight as the flag waved green was at the turnstile bend with a 3 car jacking train. 270 “Slug” managed to avoid all the collisions as well as 31 Michael Rice to become the only finishers of the heat. The orange army had some clearing up to do before the next heat.

Back to Basics Bangers 2nd Heat

Finally the 2nd heat got underway, until it was cut short with a huge crash on the back straight involving 14 Dave Loader. The flags waved green as the heat got back to the action. 70 Jamie Thomas led the re-start with 595 Ben Wall on his tail. In a blink of an eye 394 Ben Myers has done a complete 360, and carried on, only to smash into 92 Bret Escott, sending him off into a half spin. More drama occurred when 16 Alistair Edgecombe’s engine blew up. This heat had everything going on. This didn’t faze 739 Jason Moore who made it up to 2nd through the chaos. James Thomas survived a last minute bend attack before taking the win with Moore keeping 2nd place, followed by 58 Martin Dalton.

Back to Basics Bangers Consolation

Surprisingly 22 cars managed to get fixed and get kitted up for the consolation race. Again, like the two heats before this was jammed packed full of action and metal scraping. 595 Ben Wall hit the way hard on the home straight, turning around as he did. Facing oncoming traffic, this caused chaos as the car dived around to avoid him. After the aftermath of the consolation 797 “Scotty” won the race, 509 Matt Dixon took 2nd and 309 Chris Parry rolled through in 3rd.

Back to Basics Final

Not holding back the final came in like a wrecking ball with a 9 car pile up on the 1st corner of the flags waving green. The race was halted to help one of the drivers out. M. Daulton led the re-start after the carnage with 129 Lee Daulton, then Scotty was hot on their heels. L. Daulton caught up to the leaders to then scurry pass M. Daulton for the lead. Whilst this battle was happening 595 Ben Wall caused a stoppage to the race with a rogue wheel coming off. Another re-start and L Daulton was too hot to handle and led until the finish. Moore squeezed his way through and passed Scotty only to complete his race on his roof. The race was stopped and declared with L. Daulton 1st, M. Daulton 2nd and Scotty remaining in 3rd.

With all the damage that happened during the day,. Mendips was not expecting 17 cars for the All-comers. Everyone was frantic in the pits to get their last chance of a couple of knocks before calling it game over.  It was another jammed packed banger spectacular. Most of the hits on the turnstile bend. Only 5 cars made the full distance. These were led home by Parry.

Sitting patiently 14 cars were ready for the big destruction derby. It’s only one way home and that’s a metal can waiting to be scrapped. One of the drivers got too impatient with the flags waving red, the driver decided to crash into his teammate. He was immediately sent off for careless driving while the track was still being cleared. In the closing moments, 852 Ryan Hughes and 743 Jake Bond had a head on collision and M Daulton joined in the action by running into the back of Jake Bond. Hughes was on his last legs after jacking M. Daulton and come out alive. It all ended with a head on with 126 Darren Willis and Hughes. With the car on it’s last breath Hughes managed to cliche 1st.

Issues with fuel and a long haul down to Mendips, maybe put off a couple of drivers, as only saw 9 Saloon Stock Cars competing today. 1st heat saw 10 Frank Little getting the jump he needed at the start and continued on to win the heat. 677 Warren Darby spun 444 Kieran Bellringer out of the heat. Another spin happened over the finish line between 199 Phillip Powel and 902 Buster Junior. By jumping the start Little was docked 2 places down to 3rd giving the 1st place to Darby, and 28 Ian Govier took 2nd.

A lot of pushing and shoving happened in the 2nd heat of the Saloons. Govier squeezed his way past Little to take the lead with 672 Simon Paris following suit to slot into 2nd. Darby wasn’t far behind, a window of opportunity open to shove Paris wide to cliche 2nd. With the adrenaline pumping and 3 laps to go, the lead was sight, Darby went in with a heavy shunt to move Govier out the way for victory. Moments to go before the checkered flag, Little spun out. Darby held his position and took the win.

The weather started to turn and the rain started to fall for the Saloon Stock Car final. As soon as the flags went green, Govier spun out, taking Little with them on the pit bend, which caused Darby to hit straight into the back of them hard. Powell took the opportunity to nip up the inside to get in front of the pack. The marshalls stopped proceedings whilst they made sure Little was OK before re-starting the race. Powell led, with Buster, Govier behind ready to pounce. Buster made a move on Powell only to mis-calculate to hit one another and spin. Govier retook the lead, but only for a short time as Powell shoved Govier to gain the lead back. Later into the race 33 Pete Hollett ended up bumping off and into the wall, straight afterwards Buster crashed into Hollett. With all the backwards and forwards going on, finally Powell took the win, 799 Joe Powell for 2nd, followed by Govier for 3rd.

A late addition to the race meeting here at Mendips was our Junior Rods. They ran an all in format, despite the late notice, 14 cars managed to get to the raceway. Stakes were high in this additional race meeting and points could mean the West of England Championship, with the final only a month away.

During the 1st heat it was all go, go, go from the Juniors. A couple of times, the cars were going 3 abreast to clinch the points going on offer. 856 Jamie Cocks made the biggest jump going from 5th to the lead. They kept the car in the lead, making distance on the others, to grab that 1st place. 429 Tristen Heathcote was keeping pace in 2nd, however on the last lap of the heat, 311 Lewis Allen went round the outside of a couple of competitors, and crossed the line side-by-side with 26 Harry Melville. Heathcote came in 2nd, 87 Liam Harvey was 3rd, after some deliberation Allen was 4th and Melville top off the top 5 drivers.

All cars were back out again for the 2nd heat of the Junior Rods. Flags went green and 610 Alfie Murray took an early lead from pole position. 258 Riley Brimble wasn’t going to be defeated and whizzed round the outside of Murray to get in front. Suddenly, 314 Max Barraclough lost control and hit the wall on the back straight, with momentum the car skidded across the track and hit one of the infield markers. This bunched up all the runners causing Harvey to stop and swerve before rolling over. Riley Brimble led the re-start once everyone was alright and checked on. There were only 4 laps left of the race, and it was all feet on the throttle. Riley Brimble brought it home, with 162 Charlie Cocks 2nd, Heathcote 3rd. One change of position happened during the 4 lap dash. 28 Jake Ralfs got passed by Gumbleton for 6th.

The last heat of the meeting saw plenty of action from these pint sized racers. Murray took the early lead from pole. A stonking drive by Melville took him from 12th on the grid to overtake the race leader. Harvey followed suit to go from 8th to 2nd behind Melville. During this time Heathcote and Riley Brimble had a coming together. On the last lap 190 Tom Gumbleton went round the outline of Harvey. With a nail-biting last lap they came over the line side-by-side. Melville took 1st place, and with just his nose slightly ahead it was Harvey, then Gumbleton for 2nd, then Allen for 3rd.

One last attempt to get some points on the board for the West of England Championship. It was all to play for and the drivers have been on top form throughout the day. Final Murray started the race well leading from pole. C Cocks got the driving conditions just right and managed to get from 5th to 2nd. The adrenaline rush kicked in, and C Cocks pushed their way through to grab 1st from Murray. Closely following C Cocks was J. Cocks, noting all the moves and where they were going, J Cocks mimic their moves and found the right time and opportunity to go around C. Cocks. Harvey was going strong throughout the final, and sat well in 2nd, before seeing Allen taking a position away from 236 Alfie Brimble, then himself. On the last lap Allen left a gap on the inside whilst challenging for 1st. A wise Harvey saw the gap and went for it. In another photo finish, Harvey and Allen crossed the line side-by side. Jamie Cocks came out on top, and after some deliberations, Harvey took 2nd with Allen in 3rd.