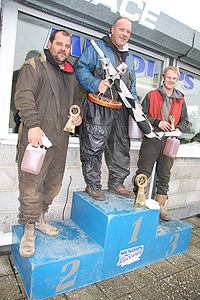 The season reached its conclusion at Mendips Raceway, and for the second meeting in succession those arriving were greeted with a blanket of hill fog.

Thankfully it was not as bad as the meeting at the end of September at any time, and whilst unlike that afternoon the sun did not ultimately shine, it did at least stay clear enough for the racing to take place, even if the track was a little damp at times.

The Unlimited Bangers West of England Championship was top of the bill, a title that dates back 33 years and they were ably backed up by the Sierra Special Rods and Junior Rods, who also had their own (more recent) versions of the West of England to race for.

The entry of Unlimited Bangers were disappointing with a few contributing factors, the over-riding one probably being the close proximity of the World Championship taking place at Ipswich six days later, and many of whom might have paid a visit were instead building their cars for that one.  That does not really count for the noticeable lack of more local entries though.   With a total of 26 cars present, and then a couple of these not actually making it to the track, the decision was made to run the main race as the first race.

190 Steve ‘Pikey’ Bailey missed an early pile up to go from the back of the grid to the front and take the lead.  However, this pile ended in a track blockage which brought out the red flags.  So many were involved in this that were few were left for the resumption of the race.  Bailey lost out to 114 Nick Courtier soon afterwards, and from then on the veteran star who was in his first Banger appearance at Mendips in over 12 years pulled further and further clear and went on to win by some margin.  Bailey held on for second and 719 Chris Storey was third.

The first of the allcomers races again saw a big pile up on the top bend, which accounted for many but none more so than 58 Martin Dalton and 315 Jack Holmes whose cars ended up severely wrecked.  This brought out the red flags and from the re-start London based visitor 822 James Newland managed to fend off the majority DWO team to hold on at the front.

However, 239 Steve Carter took matters into his own hands and turned it round and gave Newland a head on to stop him.    This is an illegal move at Mendips Raceway and the Steward of the meeting not only disqualified Carter from the rest of the day, but also reinstated Newland as the victor of the race he was set to win.

The Horace Hunt Memorial rounded out the racing side of things and saw victory for Bailey whilst 714 Paul Smaldon outlasted them all to win what was a relatively short and sharp destruction derby.

A good entry of Special Rods where the heat places determined the grid line up for their Championship race.   There was slight controversy in heat one when a coming together early on included 23 Ross Stuckey, who came into the meeting locked into points battle with 18 Russ Colenut.

Stuckey took his position at the re-start and went on to catch and pass 198 Marcus Goldsmith to take what looked like a win on the road.  However, he was judged to have missed significant time in the incident and it was thus Goldsmith’s victory.

The second heat saw a battle of youth and experience with 22 Jack Stuckey fending off 43 Andy Howard for the win.

The consolation saw 777 Leigh Ashworth fend off 122 Joe Rowe for the win.  And so the grid for the West of England had Goldsmith and 22 Stuckey  on the front row with 210 Paul Barnes alongside 43 Howard on row two.    At the flag Stuckey made a move on Goldsmith, but he saw it off and was able to lead into the first corner and young Jack lost out several places as Barnes moved into second and Howard went into third.  These three then pulled clear of the pursuing pack, but all the while 23 Stuckey was making great progress through and significantly passed Colenut in the point battle.

Stuckley then reeled in the front three and made a pass on Howard at the halfway point.  With five laps to run Goldsmith, Barnes and Stuckey were 1-2-3 together and in deep back marking traffic as well, to add to the drama.

These back markers did indeed do just that as on the very last lap Barnes saw his chance and made a move up the inside of Goldsmith.  The two of them were side by side going up the back straight for the last time with Stuckey in there too as they rounded the top bend, Goldsmith ran wide.  This gave Barnes the gap he was looking for and in as close a finish as you are ever likely to see Stuckey pipped Goldsmith for second right on the line.  This was enough to secure the points for Stuckey too, as Colenut struggled in the slippery conditions and the silver roof went from his clutches.

The first season of Junior Rods came to a close with another good entry of cars, and despite the at times difficult track conditions the races ran without serious incident, penalty or race suspension.  The first heat saw 404 Macaulay Mills fend off 198 Will Steeds for the victory and then heat two went to 127 Lois Aldom.  This put he and Mills on the front of the West of England Championship and it was Aldom who got away at the flag fall to lead.  He came into the meeting behind on points to 510 Sid Harrison, but all that changed when Sid spun on two occasions in the race whilst Louis held sway to take the title.  Mills held on for second and 313 Charlie Boorer was third.

The Allcomers was brought to an early conclusion with a few stranded cars on the track and this was a shame for 14 Andy Russell who was about to challenge Aldom for the win.  But with Louis making it a hat-trick on the day he made sure of the silver roof in the most emphatic way possible.

Sun 9th October 2011 - CLICK HERE to see the full set in a slideshow at flickr.com