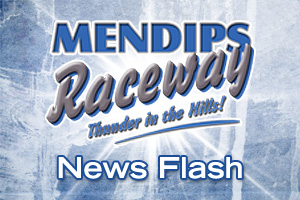 The last meeting of the season, and after the horrors of the rain at the previous meeting, and alas several others during the year we were blessed with a dry autumn afternoon.  No, it was not warm - the sunshine was welcome all the same.

The pits were nice and full with an entry in the BriSCA F2 Stock Cars that was actually a bit better than had been expected, good numbers in the Rookie Bangers and the Special Rods too.

For only the fourth time in its history, which is only two less than Mendips Raceway itself, the Grand National Championship was staged, with all the points from the allcomers race at the end of each meeting across the country determining the grid line up for the race.  There were 37 cars in total, including four drivers who were on their first appearance with us, and some rarer visitors too.

There were some fine travelling efforts with 7 Gordon Moodie, the defending title holder coming all the way from Scotland as well as 647 Chris Burgoyne whilst 823 Sam Wagner made the trip from the northeast of England.   In total there were six superstars present which is how it should be for a major title yes, but very pleasing never the less and all occupied the front three rows.

The GNC doubled up as heat one, on what was a traditional full format meeting.   With Moodie on pole position along with five times track champion 886 Chris Bradbury and then Burgoyne and 921 Jack Aldridge on row two there was hope for a big showdown.   However, Moodie got a good start at the drop of the green flag where as both Bradbury and Burgoyne got terrible starts and found themselves bundled to the outside line.  676 Neil Hooper came through to second and 700 Adam Rubery to third.   Moodie though was away and gone in a race that was somewhat processional.   Bradbury fought his way back up and moved passed Wagner to go back to fourth and when Hooper’s engine went sick at the halfway point this became third.   As Moodie continued to be comfortable at the front, the main feature of the second half of the race was Bradbury chasing down Rubery.  On starting the last lap he was on a position to challenge and went in with a last bend lunge, which was successful, particularly as back marker 904 Ryan Cattell found himself in the wrong place at the wrong time and Rubery hooked up with him and into the plating.  Moodie had already taken the chequered flag at this point.  Bradbury was runner up and Burgoyne third.

The second heat, which was essentially the support car race was won by 53 Phil Mann.  The consolation then saw victory for Hooper.   The feature Final was led by 734 Glenn Sanders until there was a yellow flag after Burgoyne and 783 James Rygor tangled up on the home straight.  Sanders lost out to 14 Mike Priddle at the re-start and then found himself in troubles himself a couple of laps later when he crashed on the top bend with 761 Richard Bowyer which again brought out the yellow flags.  All of this brought Moodie into play and whilst Priddle, 126 Jamie Avery and 254 Richard Beere did take some catching, Gordon hit the front with three laps remaining and made it a fine day’s work with his second win of the day.   The Allcomers (aka Grand National) saw a big crash into the inner Armco for Cattell, which left him shaken.  Bradbury had already got to the front by the time of this yellow flag and went on to take the win.

The Special Rod points championship came into the meeting very close with just four points separating 23 Ross Stuckey and 47 Richard Howard.   The heats played their part as they determined how they would line up for the West of England Championship.   The first heat went the way of Stuckey and the second to 18 Russ Colenut after a good battle throughout with 83 Andy Bevan.   A toss for the inside and outside rows was won by Stuckey, thus giving him pole position.

The consolation race made up the last four places on the grid and that was won by 173 Alan Cambridge, albeit only after a clash between 224 Dale Edwards and 668 Rob Looker.    At the drop of the green flag Colenut was away and got clearly ahead of Stuckey and Bevan and from then on never really looked back and was largely untroubled.  However the battle for the places behind was a great one with Stuckey and Bevan locked into one for second and 47 Howard and 39 Craig Harris in third.  That was latterly resolved when Harris was tagged by 44 Sam Howard when the pack was deep in back marking traffic.  Colenut was well clear at the flag whilst the battle for second was resolved in Bevan’s favour and with Stuckey keeping 47 Howard at bay, the points championship was his for the second year running.

There were 51 (Rookie) Bangers, which had to be a restricted entry of cars although some of whom were booked did not appear, which was a slight disappointment.  Restricted entries are not really a policy of Mendips Raceway though and every effort will be made to avoid for 2013.   Of those present it included many leading southwest Banger names, and the meeting too was a point’s championship decider.  However with that only being open to those being registered with Mendips it ended up being something of a non-event with regard to a decider and despite having a largely blank day results wise, 129 Lee Dalton was the ultimate winner.

Heat one got off to a spectacular start when 9 Adam Elias collected the stranded 427 George Harris and then bounced into the path of 54 Tom Davey who rolled.   113 Arry Brown took over at the halfway point of the race and went on to take the win.   668 Paul Mortimer was the long-time leader in the second heat until he crashed out and then 85 Andy Pincott took over and went on to win.

As with the Special Rods, a toss took place to determine pole position and Pincott won that.   The consolation saw a clear win for 176 Ben King.

At the drop of the flag in the West of England Championship Pincott found himself spun out and into the inner Armco and it was 113 Brown who led into the first lap from 718 Adie Brown and 133 Jodie Jeanes.   There was an early yellow flag with 242 Martin Quinn in trouble.  The two Browns continued to lead after the re-start, but for 113 there was trouble as he clipped the back marker 426 Ross Henderson and that allowed 158 Sean McCarthy to pounce of him and that sent him wide and into a stranded car on the car park bend.   113 Brown then clashed again with Henderson and he ended up on the plating in spectacular fashion as a consequence and the yellow flags were called for this incident and at the same time as they were the leaders McCarthy and 718 Brown crashed out.

This meant that it was 83 Ben Styles who was the leader at the re-start from 246 Ryan Sparkes and 247 Richard Sparkes.  246 Sparkes moved past Styles soon after the resumption of racing and looked comfortable at one stage.  However, he was reeled in by big brother Richard and on the very last corner he went in for a last bend lunge, which at first did not shift 246, so he had to have a second ‘go’ on the exit of the bend and spun him to take a classic win.  Ryan was swift to recover but not enough to hold on to second as 75 Paul Fisher came through to win that.

It was excellent stuff all day from the (Rookie) Bangers – good racing and action without some of the stupidity that blighted the August Bank Holiday meetings.