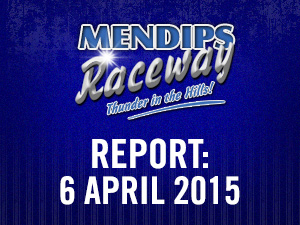 There was a big crowd for the Banger Van’s which for the 1st time was a World Championship Qualifying Round and racing for the Ramplins Trophy, Special Rods, Junior Rods and Reliant Robins. The weather was dry and very warm and sunny, with dry track conditions the pace was fast. In the Special Rods and the Junior Rods was very competitive with some very close racing.

There was a good mix of Banger Vans for the World Championship Qualifying Round including LDV/Sherpas, Transits , and a very smart Transit from 67 Rickie Beasley, and 113 Arry Brown in a Renault Traffic and 9 Mavis in a Bedford CF Camper Van. The Top Tin Awards went to 107 Dan Chiplen in a LDV Luton Van 27 Dean Quinn in a Sherpa Mini-Bus, and 189 Jamie Knox in a Transit. There was 15 Vans in the first heat which was ran at a very fast pace 517 Scott Weldon lead from pole and R.Beasley spun 270 Slug out on the first lap. There was a bit of pushing, 77 Patch Beasley spun 54 Tom Davey out and P.Beasley got spun out twice, and Chiplen, and Mavis also got spun out. 252 Boogie took the win from R.Beasley then 262 Roona and Weldon.

In the 2nd Heat 272 Arnie Quinn got spun out twice, Brown got spun out and Davey jacked up the back of Mavis's Camper leaving the caravan on the track! then Brown got put on his side resulting in a stoppage. R.Beasley lead the re-start from Boogie then Roona. Boogie found a way past R.Beasley to take the lead then went onto win from R.Beasley then Roona. 14 Van's made it out for the final with Mavis in his Flat Bed CF!! Chiplen Squeezed Slug into the turnstyle bend wall then Slug was then jacked up by D.Quinn! On the pit bend P.Beasley and A.Quinn got spun around and was collected by 242 John Quinn and most of the rest of the field decided to pile in, briefly blocking the track before a way was made through! R.Beasley took the win from Roona, Mavis and 440 Macauley Mills the only finishers! 8 Vans made it for the allcomer's into D/D.

Boogie won the Allcomer's and 6 Vans made it into the D/D which came down to R.Beasley, Roona and Mills giving each other some massive hits!! then Roona and R.Beasley where the last two and both was taking a lot of punishment before Roona pushed a parked van into R.Beasley to finally finish his Beasley's van off!

There were 18 cars out for the 1st Special Rod Heat. Pole sitter 730 Scott Sealey outdragged 175 Kevin Oliver for the lead and quickly built up a big gap to second place ,and 192 Ashley Raymond, Oliver and 51 Rob Price had a great scrap for 2nd which Price eventually got the better of. Price then built up a gap from Raymond. 720 Dan Latimer managed to get up from 9th to 4th with his car sounding a bit sick, then D.Latimer went round the outside of Raymond to get into 3rd place but Price was too far ahead to catch and Sealey took the win from Price, then D.Latimer.

There were 16 cars out for the 2nd Heat, Rob Price took the early lead from pole from and built up a gap from Raymond and Sealey. Latimer was going well until he clipped the wall going round the outside of Sealey, Sealey then found a way past Raymond for 2nd and had too reel Price in. Then just after Latimer pulled off with damage on the back straight 26 Andy Bennet spun on the exit of the turnstyle bend and 122 Joe Rowe jacked up 5 Alan Lettley taking avoiding action, which caused a 7 car pile-up involving and Oliver, 993 Darren Foss, 700 Les Brice, Raymond, and 7 Will Harraway, leaving J.Rowe parked under Lettley. The race was then stopped and declared and, the results given from the last completed lap. Price was declared as the winner from Sealey then Latimer.

14 cars made it out for the Final including J.Rowe who managed to repair the damage from the 2nd heat. Pole sitter Raymond seemed to miss a gear on the rolling lap and lost a lot of places giving 46 Harris the early lead from Price, Sealey then Harraway found a way past 364 Darren Feltham, and Oliver. Harris then got spun out by a backmarker giving Price the lead from Sealey, 304 Tim Weare managed to get up to 3rd from 426 Russ Colenut both from near the back of the grid. Weare then found a way past Sealey on the outside for 2nd then Price left a gap on the inside and Weare didn’t need a 2nd invite to take the lead then on to win, with Sealey following closely behind, from Price then Colenut. 12 cars made it out for the Grand National with Weare on pole but a lap down. Raymond took the early lead from Sealey. Sealey then found a way past Raymond to take the lead and built up a big gap. Harraway quickly got up to 3rd and went round the outside of Raymod to relieve him of 2nd but Sealey was too far ahead to catch! Sealey took the win from W.Harraway, then Colenut from 14th on the grid.

The Junior Rods were running a 2/3rds format with 17 cars out for the 1st heat 108 Adam Headland outdragged pole sitter 99 Chloe Pearce for the lead. 16 Kierran Gardener had a half spin and 101 Jack Mintram and 35 Charlie Johns had a coming together trying to avoid Gardener resulting in a stoppage then 190 Ewan Gumbleton broke down on the rolling lap. Headland led the re-start from 99 C.Pearce then 88 Charlie Pearce. 66 Becky Pearce was flying from 11th on the grid and passed 99 C.Pearce for 2nd and Headland suddenly slowed handing B.Pearce the lead, 300 Charlie Ayles was flying from the back passing mostly on the outside, with 956 Harry Thompson closely behind, then Thompson, and 224 Jordan Edwards had a coming together and Edwards spun out. Ayles found a way past B.Pearce for the lead. B.Pearce was docked 2 places. Ayles was declared the winner from Headland, 99 C.Pearce then B.Pearce.

There were 15 cars out for the 2nd Heat Headland outdragged pole sitter 36 Josh Weare for the lead 34 Cameron Mc Colm had a ½ spin with a little help! 376 Daniel Kent hit the fence, and 111 Millie Ruby hit the fence at the other end of the track whilst negotiating the traffic all in a space of the 1st couple of laps resulting in a stoppage. Headland led the re-start from Weare, B.Pearce then Thompson. When B.Pearce was passing a backmarker, 700 Ben Brice nipped up her inside for 3rd then Weare left a gap on the inside and Brice didn’t need a 2nd invite! Headland went on to take the win from Brice, then B.Pearce, then Ayles from last on the grid. There was 12 cars out for the 3rd Heat 99 C.Pearce took the early lead and Mc Colm got up to 4th on the 1st lap just before the halfway mark Mc Colm went round the outside of 99 C.Pearce to relieve her of the lead, with 224 J.Edwards in 3rd from Kent and Gumbleton. Gumbleton tried to go round the outside of Kent then switched to the inside line to get into 4th. Mc Colm took the win from 99 C.Pearce, then 224 J.Edwards and Gumbleton.

18 cars made it out for the Final. 99 C.Pearce took the early lead and Headland quickly got up to 2nd from 9th on the grid from B.Pearce then Kent, further back Mc colm and Ayles both went off course trying a bit too hard!! 99 C.Pearce, Headland, and Ruby was going 3 abreast and 99 C.Pearce got squeezed into the wall, Mc Colm and Mintram had a coming together and Gumbleton was going well until he clipped the wall going 3 wide trying to pass round the outside!! B.Pearce then got into the lead with Brice getting up to 2nd. . Brice then got on the outside of B.Pearce and after about a lap on the outside Brice made it stick. Brice took the win from B.Pearce, then Headland.

About 20 cars made it out for the 2nd Heat. Sutcliffe put 154 Joe Odhams on his side then he rolled back again and Odhams tipped himself over!! There were a couple of other Robins ended up on their side, and Plum put himself on his side!! Boden took the win from 3 Dan Tytheridge, then R.Gillingham. About 20 cars made it out for the Final S.Chapell rolled onto his side, onto the fence and bounced back to all 3. 90 Joe Cambridge got put on his side and Truman had a big rollover, bringing about a stoppage. 119 Stacey Howe had a rollover and there was a couple of other cars put on their side, then S.Chapell put 268 Dave Waterman on his roof, bringing about another stoppage. 3 led the re-start from 333 Tom Mannell then R.Gillingham then 304 Tim Weare. Tytheridge put Odhams on his side as he crossed the finish line, and Mannell also ended up on his side. Weare took the win from Tytheridge then R.Gillingham.